A bounty of exquisite works that completely filled the newly built Australian pavilion at the Venice Biennale.
Maria Rizzo
[This is archived content and may not display in the originally intended format.] 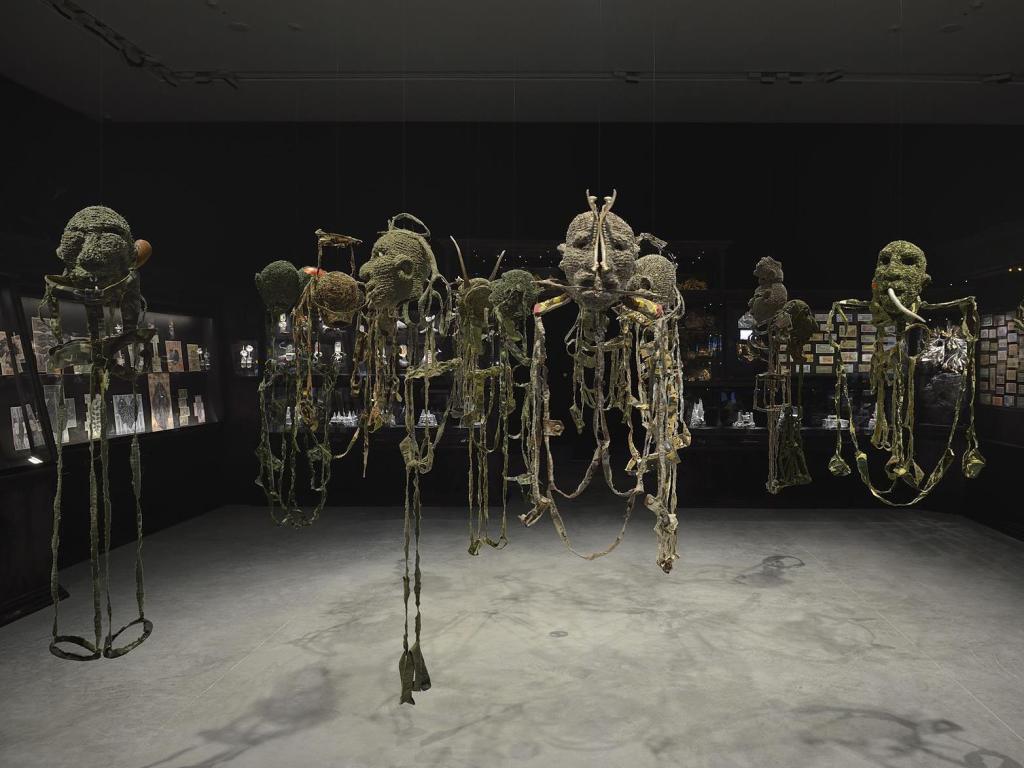 The 56th International Art Exhibition of La Biennale di Venezia closed on 22 November and we can collectively cut through the media hype to reflect on the seven month event with some clarity. The army of staff and volunteers working across the two main venues of the Giardini and the Arsenale, as well as the 44 collateral events spread out to every corner of the island, can return to their homes and have a well-deserved rest.

For the Central Pavilion in the Giardini  Nigerian curator Okwui Enwezor invited 36 artists (including seven Australians –  the largest number in the history of the event) to contribute works under the broad, inclusive title, All the World’s Futures. Through a multiplicity of forms, these works provided some insight into the current social, political, financial, climatic and ethical upheaval of our troubled times. The attentive participation of the visitor was integral to the works; in some cases actual, physical interaction and in others by implication and collusion.

Stephen Behrendt, writing about the works of 18th century poet and artist William Blake, argues that all art is inherently political no matter how ‘innocuous or esoteric the subject matter may appear to be’.1 The overall lasting impression for me was the Biennale’s mission to prove this to be an undeniable fact. It is this context that gives shape to my thoughts about and responses to the installation by Fiona Hall in the newly built Australian pavilion.

First, let me declare my nationalistic fervour and state that as an Australian I am vicariously proud of the new pavilion, designed by Melbourne architecture firm, Denton Corker Marshall and which, 27 years later, replaced the Philip Cox ‘temporary’ 1988 structure. Fiona Hall’s exhibition, titled Wrong Way Time, comprised a bounty of exquisite works that completely filled the elegant structure designed as a white box within a black box.2 Hall’s work proved to be a fitting inaugural installation to launch the new pavilion to the world. Over half a million people visited the Biennale, with 287,690 taking the time to see Hall’s work in the new pavilion. The exhibition and the pavilion were well received and of the innumerable English language and foreign language articles written, many of them listed Fiona Hall’s exhibition in the Australian pavilion among the highlights.

Hall is an artist with a lot to say but time is running out. The grandfather clocks lined up against the wall at the back of the space, as though in a graveyard, are variously decorated with skulls, skeletons, hangman nooses and graffitied with fatalistic phrases and occult-looking numbers. These objects playfully represent the wishful impossibility of the exhibition’s title. ‘Turn back the clock’ they seem to be saying. Time is going in the wrong direction.

The cacophony of the ticking clocks, punctuated with the occasional chiming of the cuckoo clocks, present a constant reminder of our mortality like a memento mori in the dimensions of space and time.

By contrast, on the right wall immediately inside the entrance is a menagerie of strange animals woven from Australian native grasses and military camouflage. The didactic sign helpfully explains that the collection features representations of endangered or extinct Australian desert animals and were made by Hall in collaboration with the Tjanpi Desert Weavers of the western and central deserts of Australia.

Here the inanimate creatures evoke a mythical land before time. Some of the animals are sitting on burnt out books whose fat spines remind us of the wealth of scientific knowledge that has been amassed through the ages and is now idle on innumerable shelves. Yet the irony is that no amount of “civility” could save these creatures. This type of colonisation had a tragic impact on human lives as well. The presence of a woven helicopter seems incongruous until we learn that Hall uses this to reference the nuclear tests that were carried out at Maralinga by the British Government, with the agreement and support of the Australian Government, between 1952 and 1963. The toxic fallout is believed to be responsible for widespread illnesses across the desert communities, the deaths of the weavers’ parents and relatives, and the extinction of the animal species.

The layout recalls a mandala; each layer of intricately detailed works sucking you in further and further into a dizzyingly excessive and obsessive constructed world. At the very centre of the space is All the King’s Men, an army of eerie exo-skeletons. The woven heads of armed force personnel are interspersed with those of tribal warriors, all of them suspended in space. All that remains of them are their camouflage uniforms that lend them a vaguely humanoid appearance. Here too Hall’s deceptively quaint, crafted objects belie a surprisingly pointed social and political commentary.

Surrounding and containing this work are vertical vitrines on all sides.  Looking more like a natural history museum than a contemporary art exhibition, Hall’s cabinets contain a vast array of appealing curiosities, too many to list in this short review. Some objects, such as the driftwood used for the Travellers are selected for their resemblance of creatures. Other objects including the bronze potatoes are in fact painstakingly and meticulously constructed.

Many of the works examine the complex interrelationships between nature and culture. In Tender, a collection of empty bird nests, we witness Hall’s finely observed mimicry of nature. On close inspection the replica nests are made from shredded US dollar bills, the serial numbers of which cover an entire glass panel. The nests are empty – the extinct birds are long gone – and the money now has no value. The title, with its multiple meanings, prompts us to reflect on the kind of society that cares more about the destruction of bank notes than the extinction of bird species.

What greater indicator of value is there than bank notes!? Despite superficial differences money is essentially the same everywhere around the globe. It represents value and facilitates transactional relationships. However, Hall treats the notes as cultural artefacts and lines entire walls with them. Some of these fine specimens in gouache depict plants that were once vital to the economies of the countries in which they grew and their seeds were traded across the globe. Now these natives look like a botanical virus that subsumes the notes and renders them as common as mounting paper. Some bank notes are arranged according to the images printed on them including dams, agricultural machinery and nuclear plants. These technological achievements celebrate the harnessing and conquering of nature.

The tins, which remain some of the best loved of Hall’s earlier works, are among the hundreds of seemingly disparate pieces that are carefully positioned so as to help us make connections between them and to guide our understanding of the issues about which Hall is so passionate. Despite the sombre colours and messages of doom, at no point does being in the space feel like we are being led on a protest march by radical activists. Hall’s tactics are far more subtle and effective.

Reconfigured cultural artefacts prompt us to interpret and reinterpret these common objects in a new way and to form new ideas from their novel juxtaposition. In Vaporised what were originally perfume bottles are now a graveyard of skull-painted glass. In Crust, loaves of bread are carved into objects including bones, a dead elephant, an unfortunate ocean liner, and placed over open atlases reminding us that too often our universal requirement for even our most basic food is set against a backdrop of political conflict and the flux of national borders.

In a display case nearby heavy opaque crystals appear to be born of corrugated cardboard with its tell-tale ridges and imperfections of the cheap cast remaining. Unlike real crystals that are beautiful, translucent, precious products of the earth and treasured symbols of timelessness these lumps of man-made bronze emerge from piles of newspapers. By setting them against the ephemeral celebrity-filled trivia and vagaries of daily news with its shocking headlines, Hall has literally and figuratively ‘re-cast’ these dull crystal-like forms to be as expendable as the pulp of newsprint.

Wrong Way Time curator Linda Michael writes in the excellent exhibition catalogue that the issues Hall addresses through her works are the three intersecting global concerns of global politics, world finances and the environment. Hall neatly contains her feelings in the description of these failed states, “as a minefield of madness, badness and sadness, in equal measure’. 3

Is it possible to find hope for the future of humanity in this overwhelming vision of despair?

Perhaps the most optimistic of the works is one that covers the only window in the space and is enigmatically titled Untitled 2015. Coloured plastic from car indicators are configured in a constellation of stars and above are the words de sidere – desiderare – desire. This map of the Southern hemisphere cosmos reminds us that the ancients used the stars to navigate by sea and land. The English word “desire” comes from the Latin term for the absence of stars. Hall quotes Italy’s most famous poet, Dante, who in the last verse of the Inferno writes “e quindi riuscimmo a rivedere le stelle” (and thence we came forth to see again the stars). Hall draws a parallel between the protagonists of The Divine Comedy and ourselves. We are lost and without stars. Be guided by nature, the work is sagely telling us, so we can navigate our way home.

Wrong Way Time will be on exhibition at the National Gallery of Australia from 22 April to 17 July 2016.  For more information: nga.gov.au

Maria Rizzo is a published writer and professional marketer specialising in niche sectors of the visual and performing arts.