Filling in the silences in Australian history

Leah Purcell's reimaging of Henry Lawson's The Drover's Wife is powerful theatre which gives a truer account of our past than much of Australian history.
Liam McLoughlin
[This is archived content and may not display in the originally intended format.] 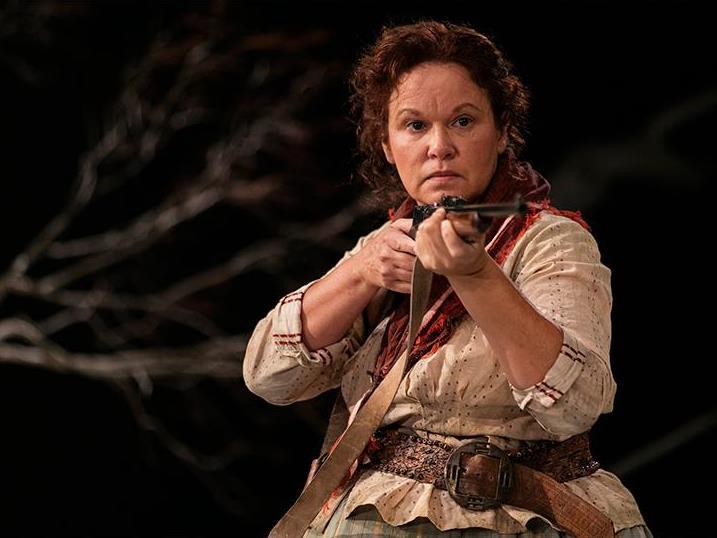 Leah Purcell as Molly in The Drover’s Wife. Photo by Brett Boardman.

‘My only true charge, missus, is ‘Existin’ whilst black’. But fight for my life, I will, and make no excuses for it.’ Though these lines are spoken by a fictional Aboriginal character in Leah Purcell’s feminist, post-colonial reimagining of Henry Lawson’s 1892 short story, The Drover’s Wife, they could hardly be more historically accurate nor speak a more resonant contemporary truth.

The presumed guilt of black existence is no relic of the 19th century. The families of Thomas Hickey, Mulrunji Doomadgee and Ms Dhu would testify to that. Nor is the strength of Aboriginal resistance confined to the past. Campaigns against the Northern Territory Intervention, a second stolen generation, and the closure of Aboriginal communities all show that Indigenous struggles for survival continue to this day.

By telling the truth about the brutal history of black-white relations in this country and paying tribute to the enduring resistance of Aboriginal people in the face of immense injustice, Purcell crafts not just powerful and compelling theatre, but offers an essential corrective to the whitewashing of Australian history.

It’s a radical departure from Lawson’s story which reinforced damaging stereotypes. In the original, a ‘stray blackfella’ surprises the drover’s wife by ‘not being lazy’ and collecting wood for her. Prejudices are quickly re-confirmed when we learn the ‘native black’ is to blame for the snake which threatens this white outback family, having ‘built that wood-heap hollow’.

In Purcell’s version, the ‘stray blackfella’ becomes Yadaka of the Guugu Yimithirr (Mark Coles Smith), a strong, wise, kind, humane, courageous Aboriginal man who wants to help the drover’s wife (named Molly, played by Leah Purcell) and her four children. The play explores the relationships Yadaka builds with Molly and her eldest son Danny, and how the essential humanity of these interactions is constantly undermined by the essential inhumanity of white hegemony.

Coles Smith beautifully portrays Yadaka’s tender reverence for his people (‘they walked soft upon this earth…it’s not what you’ve got on your feet, Danny, but how you carry ya’self, is what makes a decent man’), his intelligence (‘Poisoned. Waterhole. The tribe put me out then, ‘cause I wouldn’t go with them for payback. I knew no good would come of it’) and his refusal to submit to white domination (‘The collar is government property. You are theirs,’ Molly says. ‘Never’, Yadaka replies).

Will McDonald skilfully renders Danny’s growing admiration and love for this Aboriginal hero, evolving naturally into a desire to ‘walk like Yadaka’. Leah Purcell is brilliant as the tough, stoic, protective mother torn between love for her family, innate care for her fellow human beings, and the racist pressures of her society. Her complex relationship with Yadaka is superbly written and acted. She’s set herself a difficult challenge with a character experiencing the extremes of human emotion, but it’s one she meets with formidable intensity.

The play is no less successful in its unflinching portrait of the violently racist forces which surround and attack these fragile human relationships. Benedict Hardie and Tony Cogin play a convincing series of white outsiders (swagman, merchant, policeman, drovers) who are far more venomous than any snake could ever be.

In his 1891 novel called Black Police, artist and author A.J. Vogan wrote truthfully about the brutal slaughter of Aboriginal people by the Queensland Native Police and was punished for it. It virtually ended his career in Australian newspapers: ‘I wrote upon the unpleasant subject out of a sense of duty I owed to my fellow countrymen…But it has done me such harm here – this meddling with the pet national sin of Australia that I am forced to seek fresh pastures.’

One year later, Henry Lawson wasn’t taking any career risks with his depiction of the ‘stray blackfella’ in The Drover’s Wife.

Although it was Lawson who said ‘it is quite time that our children were taught a little more about their country for shame’s sake’, it is Leah Purcell who can teach Australian children much more about this country’s greatest shame.