This one-woman show has humour, great design and a killer concept for examining personal and political issues, but it doesn’t quite hit the mark.
Jennifer Barry 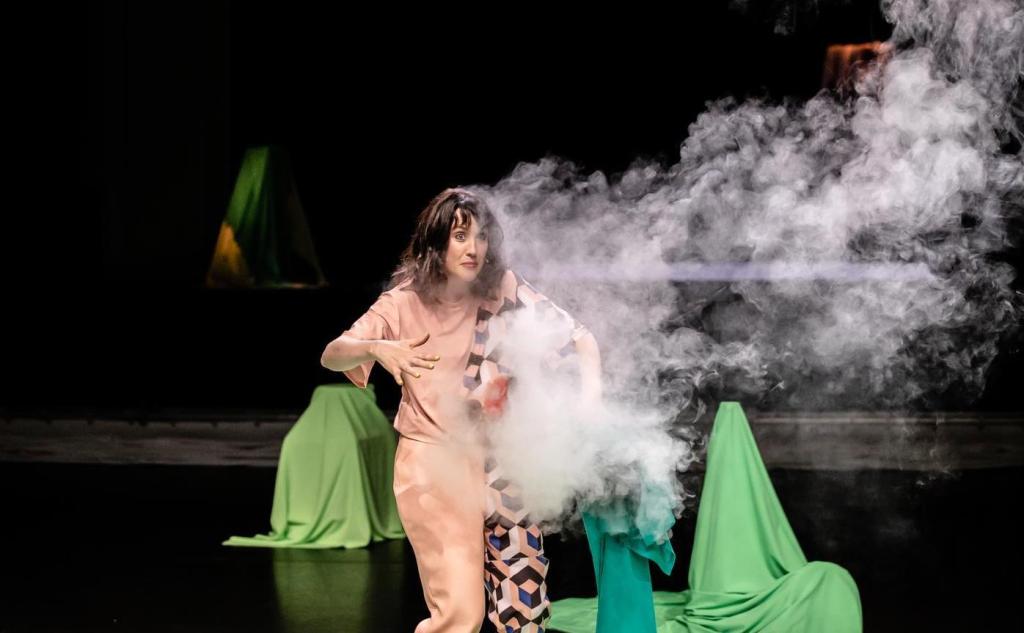 Exit Strategies is the newest work from Melbourne-based experimental artist collective APHIDS. Co-created by Mish Grigor, Lara Thoms and Eugenia Lim, it is a one-woman show about leaving, staying, and the ambivalent, often messy, space in-between.

The work begins with Grigor performing a series of exits. From the inane (think ‘leave without anybody noticing’), to the ridiculous (‘leave because a bear is chasing you’), these departures – presented in an ironic, but almost anthropological, way – become increasingly particularised and personal; revealing a miscellany of ‘stay or leave’ moments in Grigor’s own life.

But this is not the story of Grigor’s life. In performing ‘herself’ and her own relationship with leaving, Grigor becomes ‘every(wo)man’; embodying a certain Western privilege in the context of late capitalism. The choices she makes – to exit with purpose, to skulk off in shame, to travel overseas, to run away, return ‘home’, or ‘exit’ her consciousness through alcohol and drugs – represent a malaise born of individual agency; that is, exit strategies as a type of contemporary coping mechanism. This is the stuff of existential ennui, where almost everything seems absurd and nothing seems meaningful.

But, in an antipodean twist on ‘stop the world I want to get off,’ the locus for this dis-ease moves beyond the individual to ‘Australia’, where the concept of exiting a land taken by imperial invaders – a recurrent image invoked in the work – takes on a whole new meaning. In the end, the philosophical binary the work posits – do we stay, or do we go? – is contested, and the complicated messiness of post-colonial Australia is acknowledged. Can we just ‘exit’ Australia? And, what would that look like?

The idea of using exits to examine personal and collective power and privilege, and as an ambiguous strategy for bringing about change, is colossal, but Exit Strategies explores these ambitious issues in a way that doesn’t quite hit the mark. The personal and political are not convincingly integrated and we see a great idea not fully realised. The second half of the show feels unresolved, with much of the whimsical cachet established in the first half of the work – and kudos, here, must go to Grigor’s comic capabilities – undermined by didactic elements and a general loss of dramaturgical clarity.

Playing with green-screen technique in a deliberately cosmetic way (think ‘girl-flying-in-space’ or ‘girl-in-front-of-the-pyramids’), Eugenia Lim’s amusingly droll video design reinforces the work’s wry approach but feels somewhat ‘othered’, as if it has been added-on. A standout element of the work is the sound design by Nina Buchanan, which co-opts a recursive, gameshow aesthetic, successfully underscoring the work’s ironic tone and existential themes.