An intriguing, seductive survey of paintings, drawings and prints that evoke ideas of night and darkness.
Gillian Wills 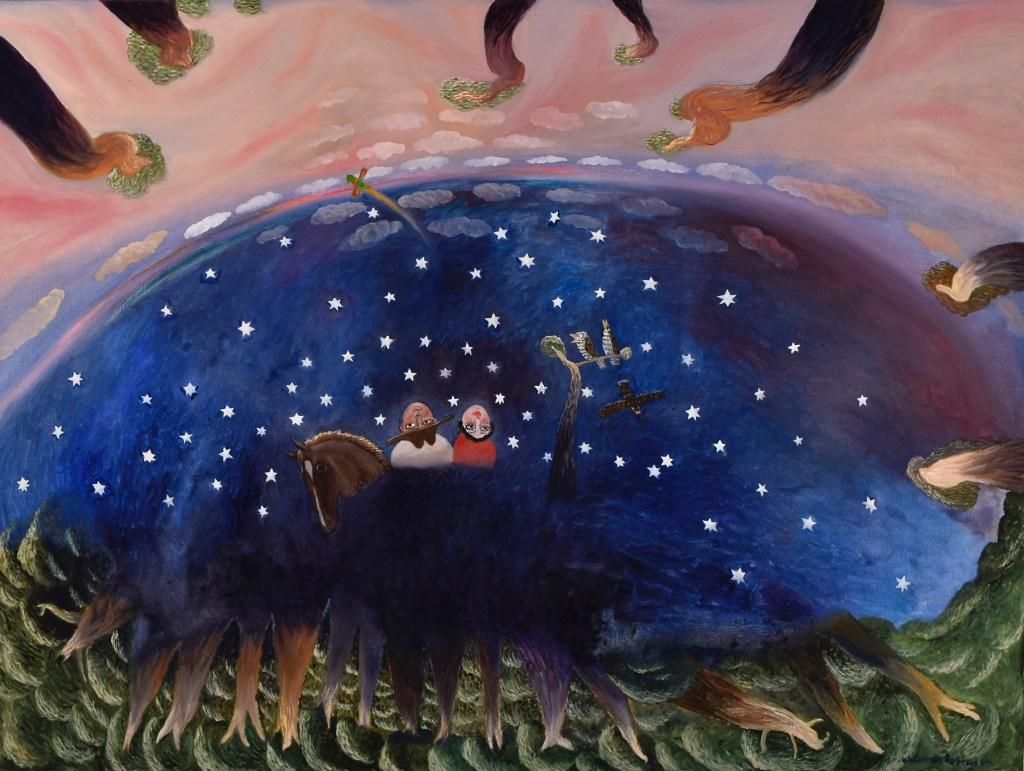 ‘So the darkness shall be the light, and the stillness the dancing.’ T.S. Eliot, The Four Quartets

In Lyrical Landscapes, HOTA’S recent exhibition of William Robinson’s grand, panoramic landscapes full of somersaulting and aerial perspectives, there are numerous allusions to dawn, dusk, day and night. In Nocturne, we have the chance to look closely at the special ways this artist explores the hours between dusk and dawn, and the way in which he folds and refolds physical dimensionality and the passing of time.

As a young man, Robinson’s ambition was primarily a musical one as he wanted to be a concert pianist. Therefore, the lure of Nocturne as an exhibition title must have been irresistible as well as relevant for QUT curators. The term was first applied to musical pieces intended for performance in the evening. When the form flowered in the 19th-20th centuries, it encompassed single movement piano pieces by Field, Chopin, Faure, Poulenc and Satie that vary widely in narrative and scope.

Similarly, composers have long been inspired by nature — Beethoven Grieg, Debussy, Bartok, Boulez, and Sculthorpe — and their legacy enshrines sonic illustrations from the natural world. Robinson’s works, like Sculthorpe’s, are grounded in the Australian bush and they effortlessly conjure the charms and complexities of this environment’s sights, smells and sounds.

This rewarding exhibition contains works that show transitions from day to night in straightforward and mystical ways in the paintings Evening light, Springbrook (2005) and Out of the dawn (1987) for example. But there are others, which comprehensively overlap and stir these transitions together in ways that are typical of this artist, such as the painting Landscape between night and day, (1993).

In daylight scenes, pools of water reflect night skies. Daylight can offer a glimpse of something in darkness, witnessed in Crack of dawn, (1988).

Similarly, Cook Island at night (1998) is a fascinating painting, a striking scene of seething, surging power and action. Depictions of partial shorelines and a restless, moonlit sea are masterfully captured in paint. It sits on the wall until our eyes rest on it and then pulses into life.

The wonderful depth of QUT’s collection enables paintings to be supported and contextualised within an insightful selection of drawings and studies. Robinson’s confident, investigative drawings help explain the magical revelation and wry whimsy in many of the canvases.

In the depths of the gallery is a small ‘meditation room’ with subdued lighting and several small Starry Night gouaches from the late 1970s. A card provides guidance through a meditation exercise. This provides a delightful, transcendent experience, which draws comparison with Menil Collection’s Rothko Chapel in Houston, which also hangs art in half-light to prompt meditation, and by extension, a contemplation of the enigmatic public personas of Rothko and Robinson.

Nocturne is not ‘a walk on the artist’s dark side’. The darkness in these works is not about fear, depression or an absence of hope, but rather a mystical theatre of creativity and promise – night skies replete in possibility and wonder.

William Robinson: Nocturne is on display until 11 September 2022