Over 200 works speak to the various forms of Australian identity.
Mem Capp 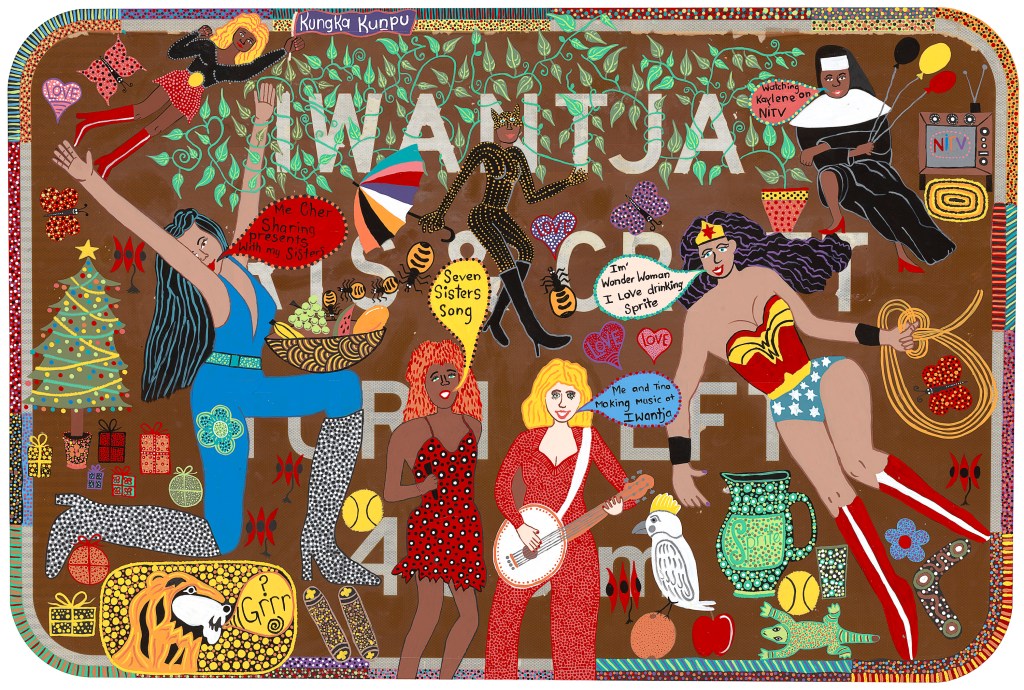 Juliet’s famous soliloquy, ‘What’s in a name? That which we call a rose/By any other name would smell as sweet‘ from Shakespeare’s Romeo and Juliet, applies the metaphor of a rose to Romeo, contrasting the importance of a name to the essence of an object. It this reframing of ‘a name’ and the conventional genre it suggests which is at the heart of the current exhibition, Who Are You: Australian Portraiture, showing at the NGV, Ian Potter Gallery Federation Square.

Snaking its way through many small and intimate gallery spaces on the third floor of the gallery, this large exhibition doesn’t feel overwhelming, despite the over 200 art works on display. Drawing from a broad range of works in their collections, historical to contemporary, this collaboration between the National Gallery of Victoria and the National Portrait Gallery Canberra, explores and interrogates the conventional notion of portraiture through a range of media: from painting, print and sculptural works to video and photography.

‘Presented across five thematic sections, the exhibition raises challenging and provocative questions about who we are and how we view others,’ said the NGV press release and it’s clear they are encouraging the viewer to reconsider traditional notions of portraiture to encompass broader notions of cultural, national as well as personal identities. Mindfully curated, this collaboration between the two galleries echoes the many conversations in the exhibition itself.

Land and identity are explored in works such as Polixeni Papapetrous’s Magma Man, (2012), from The Ghillies series, an inkjet print, using the physical landscape as a symbol of transition from childhood to adolescence to capture her son’s changing identity. Dressed in a defence force camouflage costume he blends in, yet is different from his surrounding environment. On the other hand, Maree Clarke’s Waler – gum barerarerungar (2020), a possum skin cloak made from pelts, connects the artist with Country and her own ancestral identity; crossing continents and seas from Yorta Yorta Country and Trawlwoolway Country, among others, to Ireland and Britain.

AD Colquhoun’s Artist and Sitter, (1938), oil on canvas captures the artist as he’d like to be seen in his studio setting, brush in hand with a young model and her painting in the background; suggestive perhaps of his skill but also his desirability and masculinity. Portrait, (1975), a 32-minute long video by the artist Richard Larter in contrast, captures his wife in action; talking, moving, pulling crazy faces; he presents many facets and angles for the viewer to form their own opinion of his muse.

The traditionally conventional marble bust of Web Gilbert (1905), by Frederick McCubbin capturing something of a grandfatherly benevolence stands in contrast to a range of more contemporary two-dimensional works, hung salon style, on the wall behind, challenging the viewer again to reassess the notion of what might constitute a portrait.

Oppression, repression (family portrait) (2004), by Yhonnie Scarce, made from glass, tin and colour inkjet prints is a powerful portrait of an Indigenous artist’s experience of the impact of colonialism on culture. Comprising eight industrial type glass jars, lined up on a shelf containing photographs of family members, it speaks of dispossession and Westernisation of an ancient people. On top of each jar, connecting and highlighting the sense of alienation, are beautifully blown glass forms by the artist, representing traditional bush food.

With a background in advertising, the modernist artist Eric Thake satirises the art world in his linocuts, Self-portrait among the ant hills (1950) and Epstein/Einstein? (1962), capturing something of the perfectionism of the man himself and his humour. The montage in the tradition of the early 20th-century art movement Dadaism, by Del Kathryn Barton’s inside another land 13 (2017), synthetic polymer paint on inkjet print, explores through a hybrid female body composed of human and plant elements notions of the unconscious. The flower is a symbol of female sexuality and female genitalia presenting perhaps a more universal portrait of the female as both object and procreator.

Supported by extensive didactic panels and text labels, the curators of this exhibition have created a carefully designed journey for the viewer who will be challenged by the many voices and conversations from the works on display.

Who are you: Australian Portraiture
National Gallery of Victoria, Federation Square

Who are you: Australian Portraiture will be exhibited at Federation Square until 21 August 2022 before touring to Canberra in from 1 October 2022 to 29 January 2023.