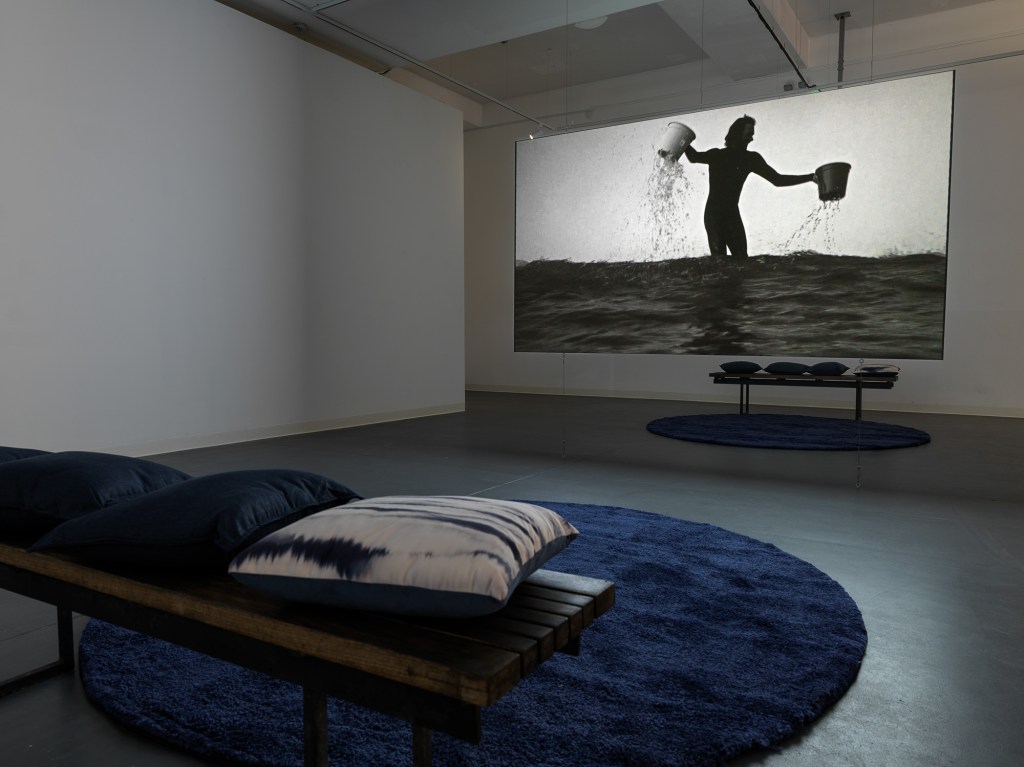 The ACE Open gallery space functions well for an exhibition of this size with just seven installed works, a sound composition, and 10 short films presented in two parts.

The works themselves are sophisticated and of museum quality. A mix of demijohns (large glass jars) with fermenting seaweed; a Perspex case, temptingly big enough to get inside especially with the door slightly ajar, housing a mound of swimming pool salt on mangrove mud; and words trailing across an advertising display unit.

The atmosphere here is earnest: We know this is an exhibition that wants to say important things that the artists believe need to be said. The opening message is clear: ‘In the Western conception, under what distinguished Indigenous professor and activist Aileen Moreton-Robinson calls “the possessive logic of white occupation”, all existence is read from a European, colonial viewpoint, which in turn positions humans at the top of the hierarchy of being.’ We are told we are made of water, we sweat and cry water, salt water, and so saltwater ‘indexes pleasure and pain, effort, escape and exaltation’.

In the main exhibition space is Mandy Quadrio’s Floating Realms and Anchored. These are constructions of steel wool, bull kelp and a wooden spear.

Archie Moore’s Lake Massacre is an installation of television monitors displaying a digital animation of text and water, diffused behind sheets of rippled polycarbonate. The messages are confusingly distorted, forcing the viewer to crouch down and peer underneath to see what is being said. Was that the artist’s intention, a deliberate ploy by Moore?

In the back section of the gallery, a well-designed dual screen presents an array of international films ‘centring water as a subject, giving voice to its rhythms, needs, memories and desires’.

Some in this audience may well see what the artists here are saying. For example, what is the artist implying when they combine kelp and steel wool, salt and mangrove mud, and how many viewers will understand these nuances of meaning?

This is always a conundrum for an artist—how much to explain and how much to leave to the imagination and interpretation of the audience. Take poetry, for example. Explaining a poem might ruin its artistic and emotional impact. Theorists Roland Barthes and Lionel Druisit explained it well, saying that a lyrical poem is ‘a vast metaphor’ and that summing it up ’causes the identity of the poem to evaporate.’ This may also be true of visual art.

So how important is the message in the artworks on show in this exhibition? When Pablo Picasso painted Guernica in 1937, he was making a statement about the suffering war inflicts and he communicated it powerfully across barriers of language and culture and time. Picasso did not try to be cryptic because his message was too important.

While my own interpretations of meaning in this exhibition may or may not be ‘correct’, there is little exposition in the gallery notes, so in truth I will never know. This lack of exposition makes Water Rites and its meanings an elitist experience consumed within the bounds of a ‘western conception’, the cultural sub-system known as art. So, are the artists and the curator using the sub system, or has their message been subsumed by the same elitist ‘western conception’ they seek to challenge?

Water Rites will be on display until 20 November 2021.

Stephen Richardson is a visual artist based in Adelaide. He works in a range of media and has exhibited locally and internationally. Stephen is the Honorary Ambassador in Australia for the European Academy of Sciences, Arts, & Letters (EASAL). He is currently completing a PhD in visual art with Central Queensland University.