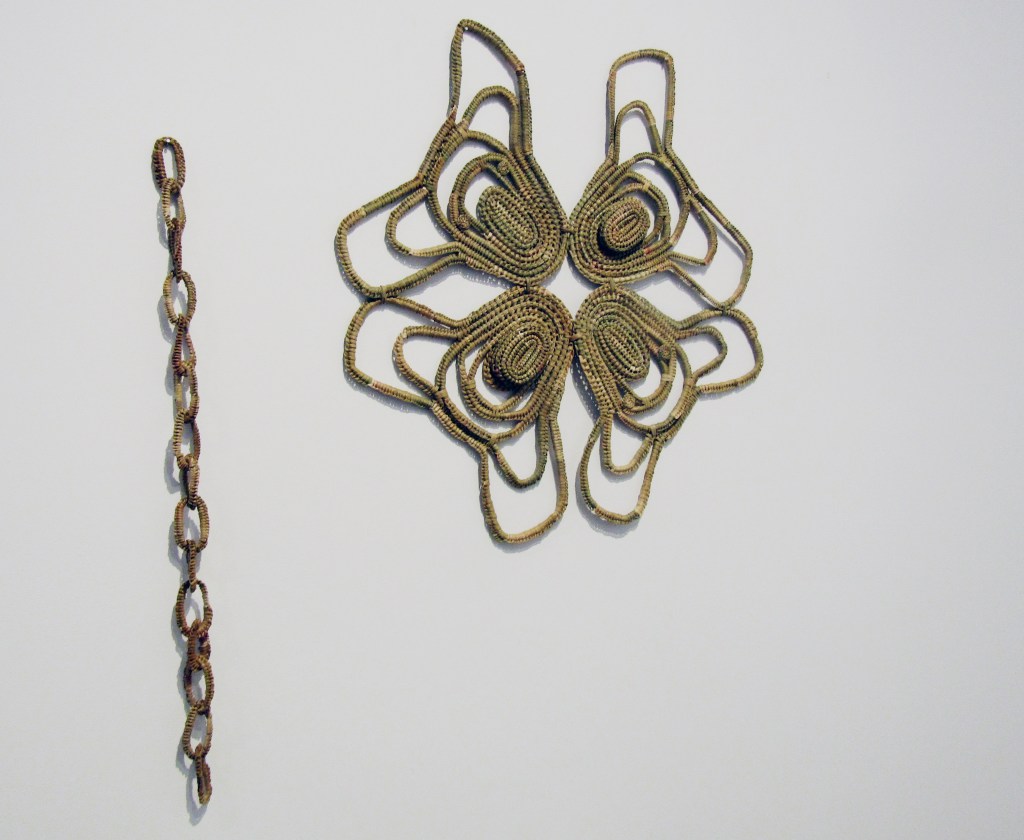 Steeper than Legal is a group exhibition curated by Marian Tubbs and Hamish Sawyer, featuring eight artists who reside in the Northern Rivers of NSW. In titling the exhibition Steeper than Legal, the curators refer to the topography of the Northern Rivers. Accordingly, the artists respond to the socio-economic and ecological problems specific to the region in which they reside and for which their part of the world is well-known for, such as low housing affordability, entrenched unemployment and climate emergency.

The catastrophe of recent months may fuel a myopic interpretation, in which Storage (2022) by Travis Paterson might be read as salvage from the decimating floods, and the hydroponic greenery of Seven Mountains (2022) by Betty Rush could be perceived as subsequent hope for renewal.

The exhibition, in its entirety, emanates a sense of Kubrickian ‘off-worldliness’, with particular reference to the rooms furnished with classical artefacts at the end of 2001 Space Odyssey, sterile splendour in which the protagonist lives out his years in isolation. However, much like the curious prepositional phrase that is the exhibition title, an infinitely more complex understanding of these artworks may be reached through slow looking. Audiences are compelled to do so by the obscure juxtaposition of familiar materials, which are at times seductively tactile and at others visceral.

Noxious (2022) is a suspended sculpture by Immortal Soil, featuring a celestial steel rimbar draped by a sensuous feather boa like form. Sufficient in length to cover the entire circumference, the mass of molasses (Melinis minutiflora) and papyrus (Cyperus papyrus) grasses, both invasive species in Australia, appears in the process of extricating and extending itself from its armature onto the ground.

By contrast, Kylie Caldwell of the Bundjalung, engages two endemic species of flora which are of significance to her people, buchie rush (Baumea rubiginosa) and lomandra (Lomandra confertifolia), to weave the installation Buruubii (2022). The title translates from her language into English as ‘koala’, which places the context of environmental conservation onto the carefully crafted composition that may be appreciated for its geometric aesthetics alone.

On one hand there are the inter-regional migrants intent on indigenisation, and on the other hand there are the Indigenous whose existence is being challenged by this migration. The provocations about the precarity of real estate are most pronounced in Other People’s Houses (2022) by Michael Donnelley and Kairan Ward. The ‘mixed media’ which materially constitutes this intriguing, yet ironic, installation include a functioning fluro light, plaster and timber. The latter forms a scaffold, which buttresses the remainder of the structure against the gallery wall. It is unclear whether audiences are being offered the perspective of looking into a room from the outside, or if the implied vantage point wedges them between an internal and external wall. Many of the visitors to the exhibition may relate to the latter, in feeling unwittingly and inextricably involved in the inequitable management of resources.

‘Steeper’ may imply ‘beyond reasonable’ or ‘excessive’, as per the ubiquitous phrase in English, ‘… that is pretty steep,’ which might be applied to an incurred cost. This exhibition challenges audiences to consider the ‘legal[ities]’ of the circumstances. Who has or should have the power to decide what resources should be made available to whom? Although the exhibition affectingly addresses sustainability issues within a specific geographic context, the universality of the implications investigated should resonate with audiences Australia-wide.

Steeper than Legal will be exhibited until 11 June 2022.