An impressive collection hang speaks to a legacy of patronage, while the inaugural exhibition Solid Gold celebrates local artists - a dual vision that steps outside a parochial lens.
Gina Fairley 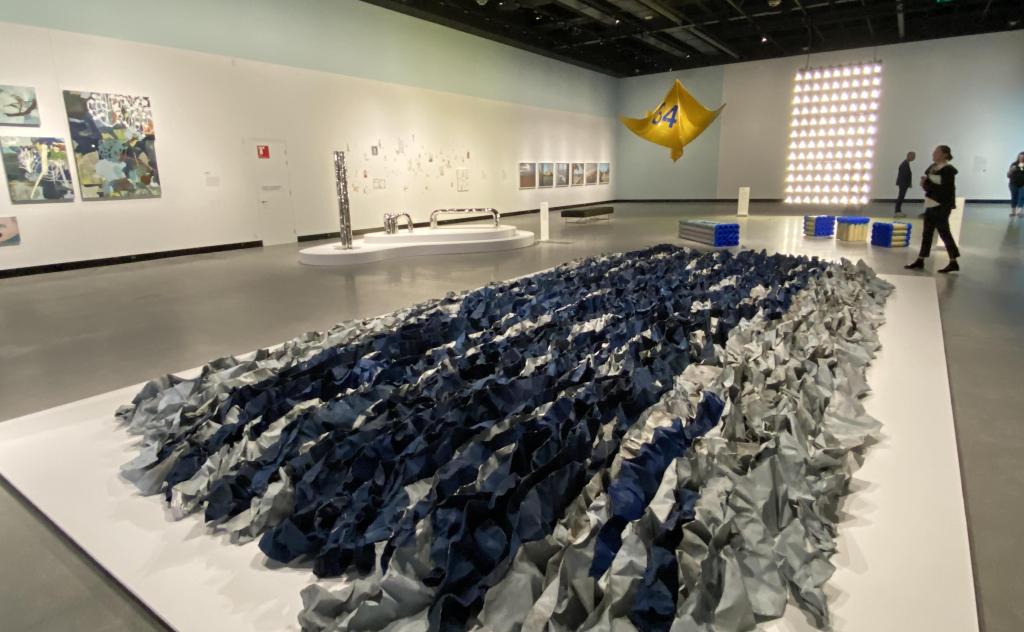 Solid Gold – it’s an appropriate title for the inaugural exhibition to introduce the Gold Coast’s $60.5M Hota Gallery, which opened its doors to the public last weekend (8 May).

It is all new work – a pool of commissions worth $100,000 – and is pitted to showcase the depth of talent among local artists, and place them within a national conversation. Loosely two ideas run across the exhibition: the quirky signature elements of this place, and environmental conversations that reach from coast to hinterland.

The show is arguably designed to show off the scale of the space, and is rather loose in terms of its cohesiveness – but then it is a group show with a big message to deliver – ‘we’re the Gold Coast, and we’re hot’. And if the opening weekend was anything to go by, it was also impressive.

A highlight that captures that energy is Hiromi Tango’s colourful installation New Now – a psychedelic rainbow room carrying the quintessential message of joy. It sits alongside works by Samuel Leighton-Dore and Michael Candy, which bridge the emotional and the physical as an entry point to viewing.

Leighton-Dore sets a field of ceramic clouds on a blue wall in the installation Cloud Drive, fusing the two concepts of a cloud as a metaphor for dreams and imaginings and a place for data storage. Are they fleeting or long lasting? A QR code links to a website of collected stories.

Candy’s grid of LED lights, Steal the sunshine, reading of the sun and transforming natural rhythms into the mechanical data. It is a idea also played out by Jason Haggerty’s Humectant Displacement, which responds in real time to data from the Gold Coast shoreline and is transformed by algorithms into a constantly changing digital environment.

They are among a number of works that more literally play out or riff off of Gold Coast icons, such as Aaron Chapman’s The Towers Project – photographs of Gold Cost’s lifeguard towers, and Ali Bezer’s 8-meter floor installation, I can hear water, that echoes the sound of waves materially across rippled metal surfaces.

Read: ArtsHub previews $60.5M HOTA Gallery ahead of May opening

Where the building really comes alive and celebrates its collecting depth is across three levels of collection shows in what is already being called the ‘Hota Tower’.

Drawn from over 4,440 works collected since 1968 – and including one of the largest collections of Aboriginal and Torres Strait Islander art in regional Australia largely boosted by the benefaction of Patrick Corrigan AM – these galleries tell a social narrative of shifting mores in Australia as well as ushering viewers through an art history journey.

What I like about these galleries is their scale. They are not overwhelming to an non-art tourism audience, and yet this cherry-picked hang demonstrates an incredible depth and range of this collecting institution, and is witness to the capacity and drive of regional galleries.

The best place to start is the top, and work your way down. It makes both chronological sense and also from a narrative perspective.

Visitors are welcomed to Pride & Passion: Highlights from the City Collection with a stunning collection of Mimi Spirits. The hang then largely speaks to collection milestones through the gallery’s suite of art prize – which well pre-date bricks and mortar.  The first iteration, Gold Coast City Gallery opened in 1986, some 18-years into collecting, prizes and community patronage .It is a story of perseverance and passion.

Here a deconstructed surf board by Scott Redford sits alongside Tracy Moffatt Pet Thang series (1991), Gordon Bennett’s Terra Nulius (1989) and Adam Cullen’s My parent’s telephone no. is 99821626 (1996), which was the first of his work collected by a regional gallery in Australia, and under the tenure of Director John Walsh.

These works speak of an ambition that sat outside a parochial lens, and well beyond the challenges of displaying them, until now.

The exhibition then moves into a suite of works that pay a nod to the first Director of Gold Coast City Art Gallery, Fran Cummings, and pick on up the zeitgeist of the day with Helen Reddy’s song of 1971, with works by Davida Allen, Suzanne Archer, Mandy Martin,  Rosalie Gascoigne, Julie Rrap and Jenny Watson.

That gender conversation is (perhaps intentionally) reasserted in a quick stroll between spaces, where the next suite of works echo The Field, presented by the National Gallery of Victoria, in the same year and defined abstraction in Australia. The line-up of male artists were the mouthpiece of the day: Col Jordan, Ron Roberston-Swann, Michael Johnson, Robert J Morris,  David Aspden and John Firth-Smith.

On the lower level is the hang Australia’s Playground: Art on the Gold Coast, which seemingly moves from the urban wonderland of the coast to the hinterland. Of note is William Robinson’s 5-meter long painting The Rainforest, acquired in 1991 exclusively with community support, and is  said to be the colour-cue for the building’s façade.

What this work embodies is a 50+ year commitment by this Gold Coast community to the visual arts, a story of patronage perhaps under-sung nationally.

It is also a teaser for the next exhibition to follow Lyrical Landscapes: The Art of William Robinson (31 July – 3 October) in Gallery 1.

Overall, these collection hangs indiscriminately present Indigenous and non-Indigenous within a singular conversation, one that slides and jostles between environmental concerns, signature Gold Coast bling, and a national lens upon a society that has been challenged and grown in sync with the topics of feminism, diversity, gender, First Nations and environment.

Hota Gallery set out to become a destination venue. There is little doubt it will achieve that goal.

As part of the new vision for Hota Gallery, the collection has also been digitised and is available for online viewing.