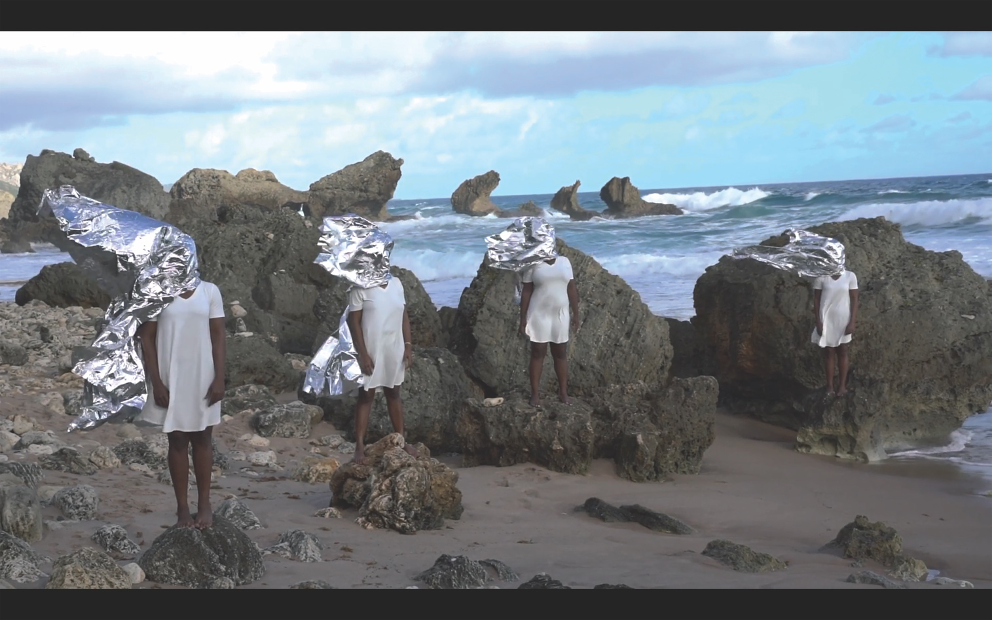 Small pieces of bread tumble and twirl as they are tossed into the flowing water and drift silently away.  A symbolic release.  An expiation of sins: Tashlikh, the ritual ceremony performed during Rosh Hashanah, the Jewish New Year, becomes the name and platform for the Israeli artist, filmmaker and photographer, Yael Bartana’s video work, 2017 (15 – 26 February) as part of the group exhibition Peripheral Vision, presently showing at Anna Schwartz Gallery in Melbourne. The work acts as a medium for both survivors and the perpetrators of genocides and ethnic cleansing such as the Holocaust and Armenian Genocide and the Sudanese and Eritrean atrocities committed during their civil wars.

Bartana’s work is one of an impressive selection of local and international artists that includes Hiwa K, James Nguyen and Victoria Pham, Haris Epaminonda, Sarah Morris, Cyprien Gaillard and Alberta Whittle whose works form a series of large-scale, singular video installations presented over a 14 week period; each installation showing for close to two weeks with a three day turn-over between works until 7 May.

Curated by Tania Doropoulos, Director of Anna Schwartz Gallery and Lewis Gilbert, Creative Director at A Vibe Called Tech, the show aims to create an ‘embodied relationship to viewing video’ which was not possible during lockdown. The works provide a contemporary view of the world from a range of different perspectives.

The ground floor space at Anna Schwartz is minimal, its long, rectangular shape is broken by a bench for those that wish to sit midway. It is dark, tomb-like in its emptiness, except for a large screen situated at the far end of the room. The video piece has just ended and for a moment it is silent, time for a contemplative pause before the video loops back to the beginning.

Images of a life jacket, a backpack, personal trinkets, a hat, a rifle, a baby’s knitted jacket, a skull, fresh food spills from an up turned bag, and a black and white photograph showing smiling faces, then a revolver. The images come and go. There is no narrative. The objects, artfully filmed, speak of both the individual and the collective. A soundtrack softly drones in the background; every now and then there is a gentle crescendo only to fade out again as the images tumble and twirl down the screen disappearing into the velvet blackness of the chiaroscuro background. Black like a night sky with no moon or stars, black like the bottom of an ocean floor where no light can reach, black like fear and despair but also black that gives a clarity and highlights truths, not faded remembrances, but stark and uncomfortable stories that cannot be forgotten. This is a powerful work.

This installation is supported by a hand catalogue that can be viewed in the gallery foyer on entering. Though stairs from the street may pose problems for people with accessibility requirements.

Peripheral Vision will be showing until 7 May 2022