A powerful monologue about food, consumption and life in restaurant kitchens.
Helen Hopcroft 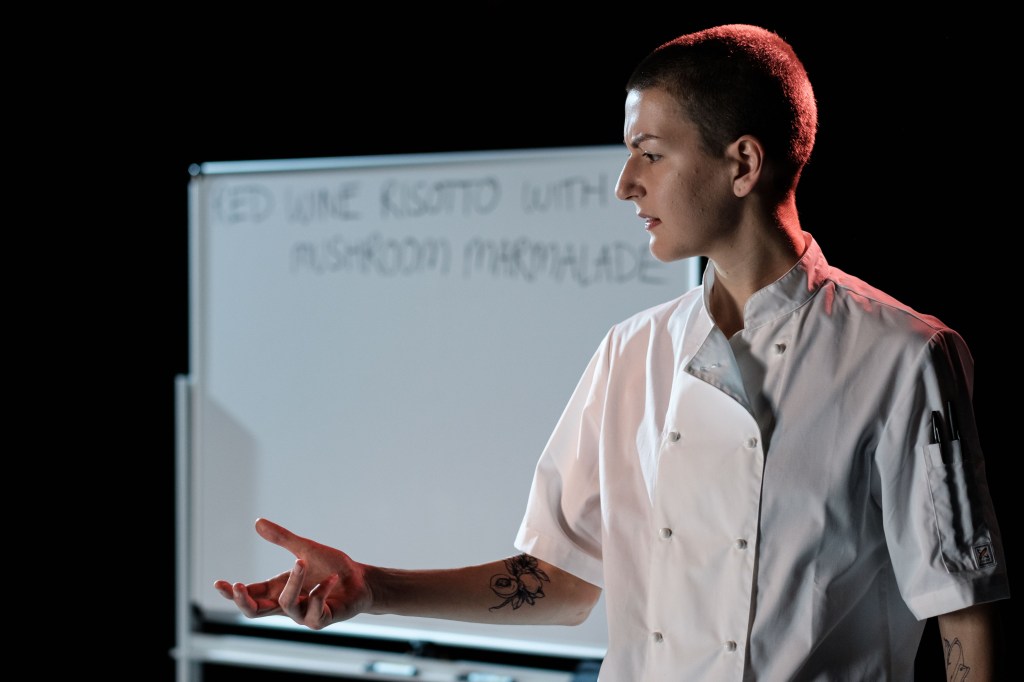 ‘Playwright and poet, Sabrina Mahfouz, uses Chef to explore food as a metaphor for power, agency and self-expression.’ Photo supplied.

A crowded theatre on top of a noisy bar in Kings Cross. We queue on the staircase, waiting to get in. Out the window you can see the giant red Coca Cola sign. In the midst of Pride, the walls have been clad with a layer of metallic paper and plastic: it looks like ectoplasm. We find our seats and the event organiser takes to the stage. She apologises for the heat: air conditioners have broken, they’re being fixed, if anyone feels uncomfortable they can retire to the foyer.

Like any first night, the space is dense with nervous energy. The organiser performs an Acknowledgement of Country, stumbles over the words and ends up paying respects to the ‘elderly’, then the director darts onto stage like an anxious hen and gasps something about a technical glitch. It’s an inauspicious beginning to a raw, flawed but magnificent piece of theatre.

Chef is a powerful one-woman monologue that tells the story of an impoverished young woman’s rise and fall via restaurant kitchens. Her talent for cooking – and philosophy of food preparation – is the guiding light that helps her navigate her father’s domestic violence, find her way out of an exploitative intimate relationship, and eventually take over the management of an up-and-coming restaurant. Fate intervenes in the person of her ageing father, now dying, who begs her to end his life. Early in the play, we discover that the narrator is telling this story from a prison kitchen.

In The Sociology of Food and Eating, Julia Twigg argues that ‘seemingly trivial or mundane aspects of life, such as food and food patterns, touch at times on the most profound of issues’. Chef is simultaneously a meditation on consumption, social class and gender. Mahfouz asks, ‘who has the power to eat who?’

In her kitchen, the narrator – in a majestic performance by Alice Birbara – takes the raw ingredients of an appalling life and transforms them into something of beauty and value. She comments that to restaurant patrons, the labour of the people who deliver their food – the foreman, packer, lorry driver – is invisible.

‘None of us even matter’, she observes. Yet food is also the vehicle she uses to sustain her creativity in prison. While reciting recipes from a book that she is writing, the narrator relates the violent events that brought her to this place. Each of these events is intertwined with food.

Mahfouz’s text is so well written and densely populated with lyrical phrases that it sometimes appears to get in the way of the actor’s ability to express herself. There are moments of wonderful physicality – Alice Birbara brings a lithe, sinewy power to this role – such as when she spreads her arms behind her body, seen in silhouette from both sides of the theatre, like a great bird taking flight.

But at other times, Birbara seems constrained by the script, as if the load of conveying all this beautiful language has taken some of the energy she needs to fully inhabit the role. At times, Chef feels more like an epic poem than a play.

Directed by Victor Kalka, Chef is a highly aesthetic production with intelligent light and sound design used to reinforce the play’s structure. Don’t go to see this production if you’re hungry – the constant references to delicious food will make it a miserable experience.

Chef is an excellent independent production by a dedicated creative team that tackles the darker side of human consumption.