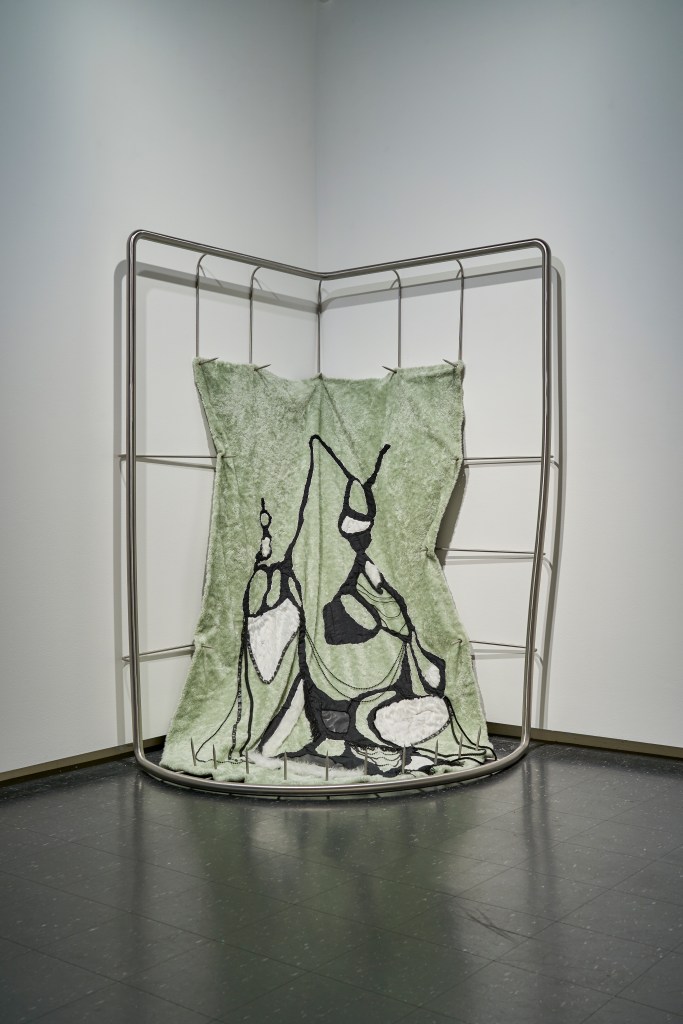 An installation by Kate Bohunnis in her latest exhibition. Image courtesy of the artist, Adelaide Central Gallery and STATION. Photo by Sam Roberts

These are pieces rich in texture and meaning from an artist keen to explore and push the limits of new materials.

It has been a significant year for Bohunnis, who in May was declared the winner of the 2021 Ramsay Art Prize for her sculptural installation Edges of excess. Her ‘inventive approach to materials’, as was noted by Ramsay Prize judges, is again on display in her latest exhibition: Fill me up and make me useful.

Currently on show at the Adelaide Central Gallery, it’s comprised of three main sculptural arrangements. These pieces, along with an essay by Grace Marlow that was commissioned to accompany the exhibition, investigate themes of feminism, gender, and identity.

As Bohunnis explains in a video interview (filmed by Sam Roberts and available to watch at the gallery), she is particularly interested in breaking down, ‘this absurd idea of a woman’s body having these cognitive and physical failings simply because it is a woman’s body — and what is supposed to be fulfilled, what the productive potential of a woman is supposed to be’.

The first piece, a mass of soft, white fabric entwined with strings of beads, hangs from a severe steel loop and sags against the floor on either side. It suggests a deflated, once sumptuous ballgown, or perhaps a wedding dress. I was reminded of images of women in fiction and in real life — Anna Karenina, Bertha Mason, Princess Diana — for whom the constraints of marriage proved unbearable.

Further on in the gallery, a large sheet of fabric — the faded gold and fuzzy texture of a suburban carpet — hangs suspended from a row of what could be steel crochet hooks, sharpened and enlarged to a violent scale. The piece evokes elements of traditional domesticity in its details: ruffles, curtain fringe, more beading. But look more closely and some of the shapes become soft body parts, concealed orifices, human skin in its varied textures and colours.

These suggestions of sexuality continue in the trailing scraps of latex, a material Bohunnis says she has faced a shortage of during the pandemic, as ‘people that were locked in their homes were wanting to…explore kink-wear and play in a different way’.

Finally, in a far corner, a cage-like structure pinions a textile arrangement in which interlinking black and white strands and blotches — like a shadowy x-ray of jumbled organs — are juxtaposed with the stainless-steel frame and its connotations of sterilised medical order. As Grace Marlow notes in her essay, it calls to mind theories about hysteria and wandering uteruses — patriarchal attempts to diagnose women as having inherent, biologically determined weaknesses.

Fill me up and make me useful may contain only three pieces, but they are arrangements worth more than one look. I found myself returning to each one again and again, finding fresh meaning and new layers of detail each time. Of course, this potential for varied interpretation should come as no surprise from an artist who celebrates nuance and diversity, both in art and in the way we understand gender and identity.