Mark Galea's geometric sculptures and paintings are a perfect balance between space and colour.
Tahney Fosdike 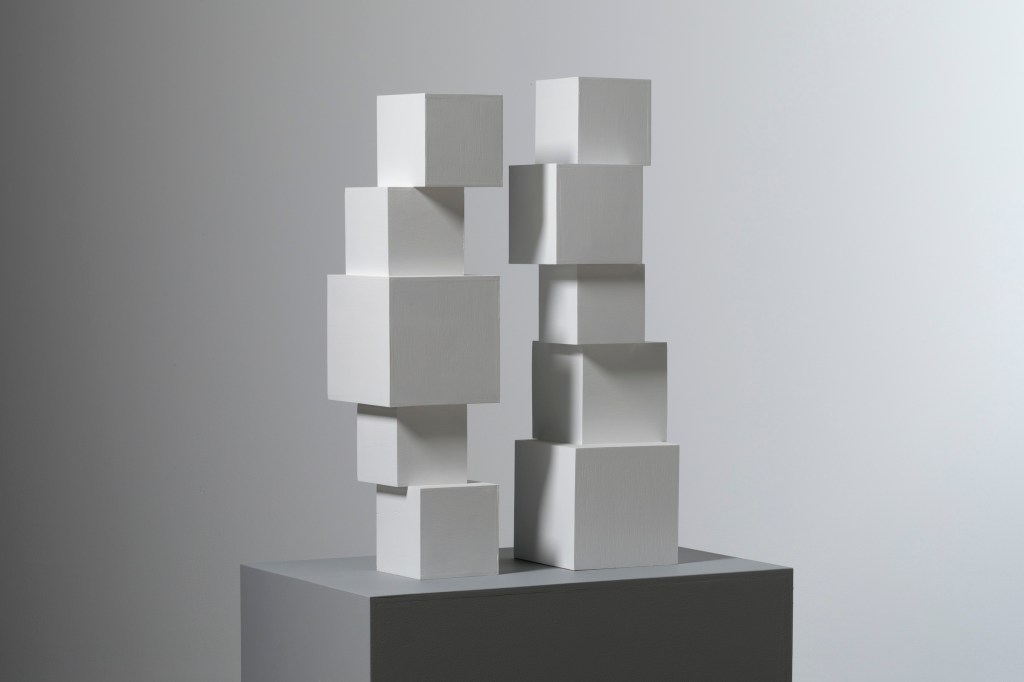 ‘Groundwork exists with both humble and dynamic energy…’ Photo supplied.

Deploying a form long preoccupying the abstract imagination, Mark Galea’s Groundwork balances his dedication to the cube with heed to care and chance.

The four-day solo exhibition at Mission to Seafarers presents selections of two bodies of recent work by the Melbourne based artist.

Low-hanging large canvases line the walls featuring layered rectangles and squares. At first glance, the darkly hued paintings contrive a harsh cosmopolitan physicality. Such an impression dissipates when, on closer inspection, the colours evoke a rural, rather than melancholic textile appearance on the canvas.

This response isn’t far from intent: these ‘dead colours,’ as coined by Galea, call to the landscape. Yet, they also reach further. Olive green, milky peach, muddy purple, dusty blue offset by block white feels domestic to the country – this rustic gentleness is unsurprising given their creation in Galea’s regional Victoria home.

Galea’s paintings circle sculptures in the exhibition’s interior: plywood boxes stacked into 1 to 7 feet jagged towers. Although their colour is less investigational than the canvasses – matte, slightly textured black, white and brown – their composition – orderly, delicate but with breadth and weight – imposes a trancelike Jenga effect.

Pyrite, a mineral that looks at once man-made, scientifically crafted and spiritually alive, inspired their deliberate yet playful matter. Galea’s interest in this ‘naturally occurring sculpture’ infuses into a construction that feels organic yet defined.

The choice of exhibition space mirrors the artworks’ unfamiliar but calming temperament. Although a short walk from Flinders Station, not many know the Dockland’s Mission to Seafarers, one branch of an organisation operating in 200 ports worldwide. Groundwork gives the perfect opportunity to explore its strange charm situated in the Norla Dome – a room more reminiscent of the Vestibule in Diocletian’s Palace (Split, Croatia) than its initial purpose as a gymnasium.

The dome’s curves prime the angular pieces for mesmerising contrast. The canvasses almost camouflage against the exposed brick and concrete, while their rectangular content seems to expand, rather than stay rigid, against the walls’ curvature. The dome’s ‘oculus’ (a circular opening in the ceiling’s centre) also creates allusions to the sculptures, as ever-changing shadows and light contour their yearning reach to the sky.

These instinctual guides draw the eye to interact and transition between the repetitive cubes – an effect only sometimes interfered with by the plinths’ mustard colour not blending with the works they hold. Still, the seam between form and space encourages the viewer to walk and re-engage their gaze over and over – not a feat easily won with abstract work, sometimes shallowly viewed even if well-developed.

The synergistic effect between art and observer continues in a catalogue essay by Kelly Gellatly. Following a prelude poem of Mary Oliver’s This Summer Day, Gellatly frames Galea’s work with a tone of rapport between the pair that provides intellectual accessibility without overshadowing the intuitive exploration of the space.

Groundwork exists with both humble and dynamic energy, a duality owing to Galea’s spatial and colour awareness transfixing his work with a presence open to the viewer’s approach.

Groundwork was on display until 1 April 2022