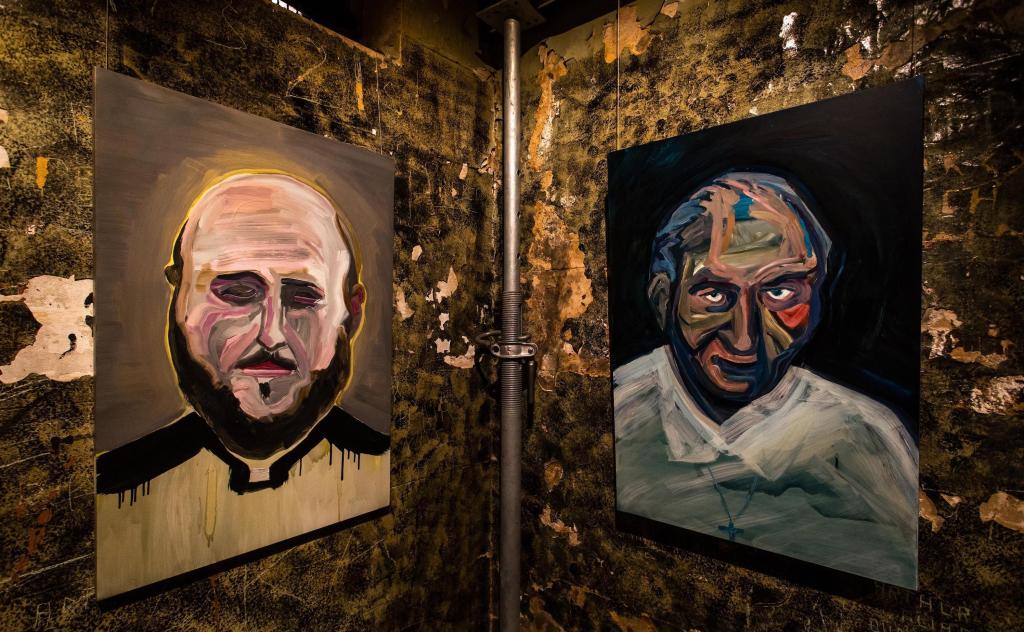 It’d be hard to imagine a better marriage of theme and venue. Curated by Halinka Orszulok, False Sense of Security explores the ‘…subjectivity, privilege and hidden costs of our security’ – sited in Newcastle’s former inner-city police cells, now exhibition space, The Lock-Up.

Doug Heslop’s Heads (2017-18) is a series of portraits of men named as paedophiles in the 2017 Royal Commission into Institutional Responses to Child Sexual Abuse.  All of the men were Catholic priests, youth workers and lay church people, who were living in the Maitland and Cessnock areas.

Heslop found pictures of the men in local newspapers, magazines, and newsletters and created a series of impressionistic portraits, of which 12 have been selected for the show, all hung together in a former cell. The faces are startling and disturbing, evocatively rendered by the artist.

The spaces where Heslop’s and other works are hung remain much as they were – some are converted spaces, others left raw – and still bear the scars of prisoner’s graffiti, including one that reads BOYS DON’T CRY. It just so happens these words can be seen just to the right of one of Heslop’s canvases.

This kind of connection between work and space is a constant. Tracey Moffatt and Gary Hillberg’s Doomed (2007), a montage of scenes of destruction from disaster movies, fills one wall in a converted gallery space. Orszulok’s own work – three canvases of night-time scenes on the fringes of suburbia – face off against the video at the opposite end of the room. It’s an intriguing combination – both works seem to take you out of your moment of observation, invoking a creeping sense of dread, offset by a weird feeling of calm.

A similar sense of estrangement connects works by Giselle Stanborough and Heath Franco. Stanborough’s Cinopticon (Wall) (2020-21) is a mix of text and lines painted on a temporary wall. Part graffiti, part a map of a series of connected thoughts, the work seems to be about everything in the world, seen from a vantage point somewhere inside the artist’s mind. Franco’s videos – Home Town and Home Town Two (2014 and 2016) are instalments in the artist’s on-going interrogation of what’s ‘normal’, amped up into a video performance of grotesques, with heavy make-up, odd hats and costumes, the artist intoning disconnected phrases such as ‘We know what happens if you tell.’

Whereas most of the works on False Sense of Security have a fairly direct thematic connection, the two installations by Fernando do Campo – Call to Non-Verbal Action (Whoslaughingjackass) 1 & 2 (both 2020) and The Towneys Watched Back (2017) – need a bit more interpretation. Both take the remnants of colonialism found in everyday language as the basis of elegant and abstract pieces. The works seem at first glance to be about the uncertainty of interpretation, but there is a more elaborate backstory for those who wish to dig beyond their elegant installations in the Lock-Up’s exercise yard and adjacent rooms.

Shevaun Wright’s Rebecca (2021) is a commissioned work that deals with recent local history. On 19 July 2016, an Aboriginal woman named Rebecca Maher died while in custody at Maitland Police Station’s lock up. A coronial inquest found that the death was accidental due to insufficient medical attention.

‘The connection to place is the show’s abiding strength.’

Wright’s work memorialises this tragic event with of a white safety blanket spot lit on the floor of a former cell, and another blanket, patched together and featuring the embroidered words of various accounts from the inquest, on the wall. Like Heslop’s work, it’s power is unequivocal, as it connects a range of subjectivities to ideas of security, a direct and unambiguous statement that is sadly universal.

A theme in an exhibition is an idea that a curator needs to let play, and Orszulok has followed a number of lines of inquiry. While the show uses The Lock-Up as both a site-specific location, and as a more general exhibition space very well, the show shifts from a refreshingly direct connection to theme to  one that’s at times much more uncertain. While it feels that these two tendencies in the works are not fully resolved, and induces its own kind of anxiety, the connection to place is the show’s abiding strength.

Dr. Andrew  Frost is a writer, critic and documentary maker. He has been writing on art, film and culture for a variety of Australian and international publications since the 1980s and was the founding editor of the long-running blog The Art Life. He is also the writer and presenter of more than a dozen documentaries on Australian contemporary art for ABC1, and has also directed and co-produced a number of documentaries including My Space Program: The Art of Peter Hennessey (2016).