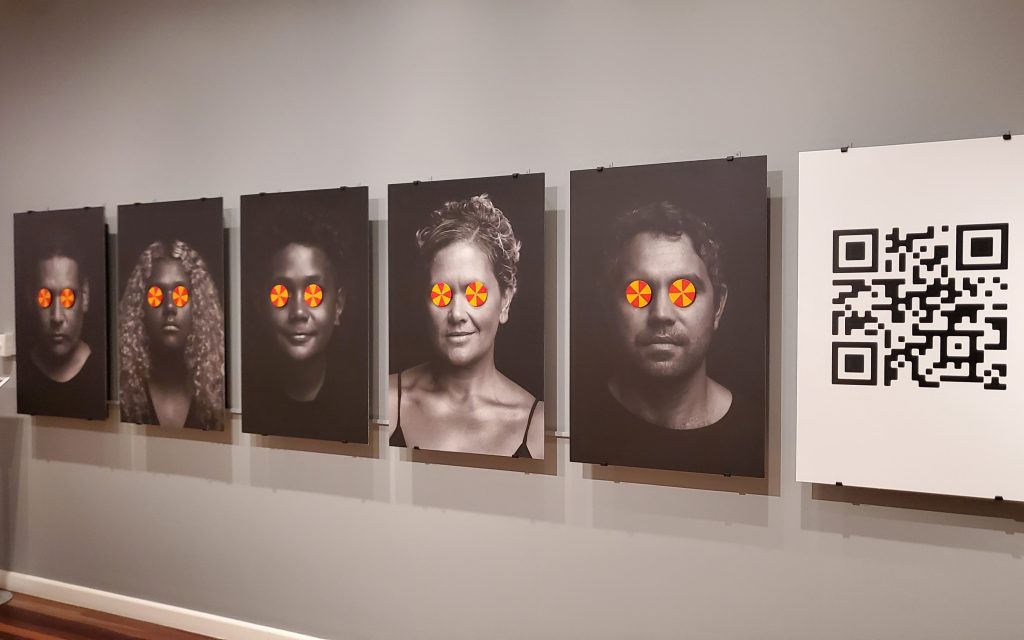 Repatriate, as the name suggests, not only takes ownership of cultural practices pre-contact, but claims recent histories that have influenced the issues, trauma and varying lifestyles of contemporary First Nations people – remote, regional and suburban.

Participating artists across Queensland offer their voices and experiences through works such as Dion Beasley’s Cheeky dog drawings and Kyra Mancktelow’s GUBBA UP (2021-22).

Running in the adjacent space is a solo exhibition of Teho Ropeyarn, TRAVERSING THREE REALMS: The physical, natural and spiritual.

Further to the representation of Injinoo motifs (around Cape York Peninsula where the artist is from) is the connection to Country and the desire to share permitted stories.

This sentiment to represent an ’Aboriginal worldview’ means that the bold prints of Cape York Lilies and Athumu Paypa Adthinhuunamu (my birth certificate) pulse with energy of a vibrant and continuous Culture.

A further highlight is Suggoo Pennise (2021), a collaboration between Grace Lillian Lee and Elder Dr Ken Thaiday Senior, who taught Lee how to weave. It was originally created for the 10th Asia Pacific Triennial of Contemporary Art.

Housed in the darkened space, the emotive and awe-inspiring qualities of the work is astounding, where one is imbued in an atmosphere of First Nations pride.

If the broad scope of motifs (‘Suggo’ meaning octopus and ’pennise’ fish trap) weren’t dazzling enough already, the work is reflected in a mirror below, delivering endless combinations and a well of possibilities.

On opening night the work was joined by One Man’s Trash, an ephemeral performance by Jaymen Leigh Drahm combining visual set, ultra-violet paint and dance.

Filled throughout the hallways and into the gallery spaces, Mornington Island Art: Legacies Living On, Yuk Wuy Min Ngantamp, and Nyungu Bubu: Stories from our Country features traditional practices and stories on legacy. They run in conjunction with CONFLUENCE: Design, Technology and Culture and Francoise Lane’s Tropical Punk Backpacks, showcasing the parallelism and duality between tradition, innovation and technology.

A breath-taking selection of photographs, installations and intricate works of craft and tradition span two levels of Cairns Art Gallery in FACELESS, which brings together Blak/Black artists from North Australia, Africa and the African Diaspora in seamless dialogue.

The 25 artists each stage provocations around identity – some with humour and satire while others deal with rigorous investigations into the bodily and the political.

Queensland artist Shirley Macnamara’s mourning caps sit at the centre of the first gallery, its presence a resonating call to the loss of identity, of Country, taken over by grief and mourning.

The faceless caps made of spinifex and orchre are presented as a constant reminder of loss, but also a call to re-imagine possibilities of filling up that emptiness..

Macnamara’s works create a dynamic resonance with Benin-based artist Leonce Raphael Agbodjelou’s photographs that feature Egungun, masked and costumed figures depicting the spirits of departed ancestors. As well as presenting cultural pride and the continuation of an ancient tradition, the works are an enduring reminder of resilience and relevance.

A theme which runs deep in the exhibition is that ‘faceless doesn’t equate to powerlessness’. In fact, works such as those by Nyaba Leon Ouedraogo (West Africa) depict putting on masks as acts of empowerment and remake, while Naomi Hobson’s (QLD) photographs exemplify a choice to reveal or hide one’s identity – which subsequently shape the narratives her young subjects wish to convey.

Young leader Dylan Mooney also present works as part of the exhibition in the Gallery’s loft space. A Story of My People gives voice to those who were historically removed in the Mackay region, while digital posters questioning ‘how we are viewed’ and ‘are we more than our history’ speaks to current and future generations.

BJ Murphy (QLD) re-situates traditions in a satirical contemporary context, drawing on absurdity to highlight the impacts of assimilation. In Ceremony (2022), the Jinibara artist uses a lawnmower to create his Bora (Ceremony circle) instead of utilising traditional practices, balancing his ‘cultural obligations’ with restrictions imposed by colonial legacy.

On the other hand, Kim Ah Sam’s (QLD) series of handmade masks in not knowing what you know (2022) traces a journey of becoming as she learns of her cultural connections, with each weaved mask taking months of work to complete.

With Sam’s work alongside many others in the exhibition, identity means more than what is perceived on the individual level; rather they present possibilities for collective re-imagining while simultaneously challenging the idea of over-simplified stereotypes.

Tony Albert’s (QLD) Aboriginal Art Hypnotherapy (AAH) functions as both an interactive introduction to the show as well as a humorous ending. A button activates spinning wheels that replaces the eyes of several monochrome portraits. Beside it a plaque warns visitors to look away if they don’t want to fall to the hypnotic effects of the work, which induces you to donate money to the gallery.

In FACELESS, humour and criticality come in equal measure, balancing out an already visually stunning exhibition. It pushes and pulls viewers to draw closure, to engage, and to carry those reflections well beyond the bounds of the gallery space.

The unique and ancient blue displays are imprinted with a breadth of motifs honouring the sacred waters of Minjerribah (North Stradbroke Island), 30km southeast of Brisbane.

A wealth of stories and motifs can be unveiled in each work, calling for contemplation, meditation and an appreciation of being on Country.

Situated in the depth of the rainforest and right next to Cairns Botanic Gardens, the exhibition provides a transportive window into the dynamics of Carmichaels’ practice and their deep connection to immersive storytelling.

ArtsHub travelled to Cairns as a guest of Cairns Indigenous Art Fair (CIAF). 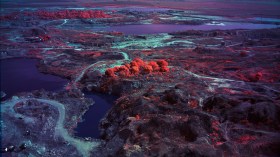 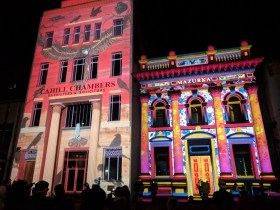