A potent, superbly executed work that pulsates with sadness and rage, resilience and joy.
Kate Rendell 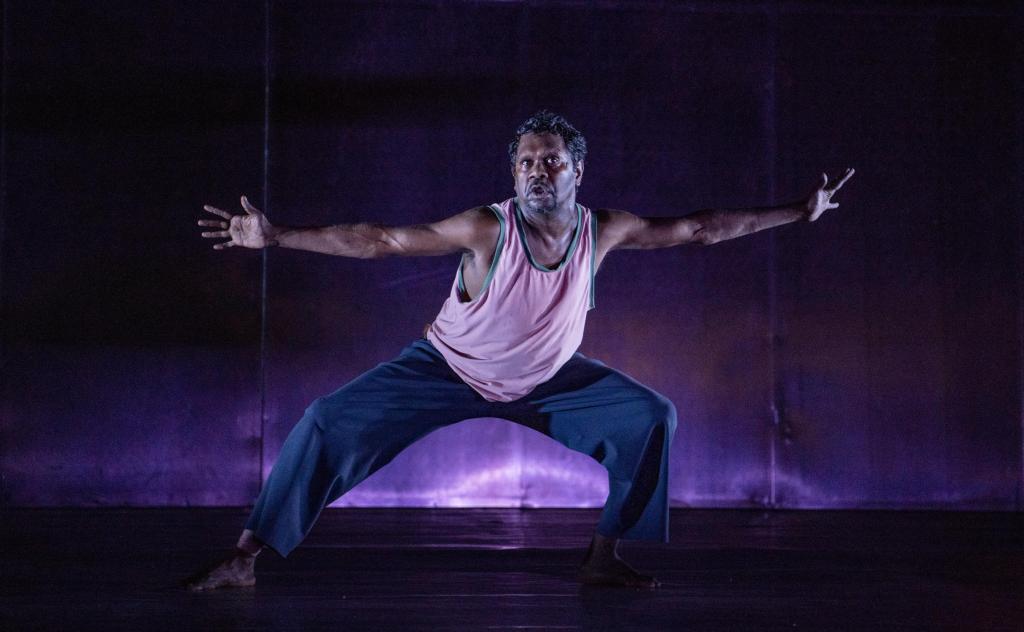 It feels almost reductive to put into words an experience as visceral as Jurrungu Ngan-ga, the new production by the intercultural and interdisciplinary company Marrugeku.

A hybrid work of contemporary dance, spoken word, multi-media and sound design, Jurrungu Ngan-ga is a raw, physical exploration of the fear that feeds discrimination. Confronting the cruelty of our nation-state’s rampant incarceration of Indigenous peoples and those seeking asylum, Jurrungu Ngan-ga is a layered work comprising a series of distinct scenes, each contrasting in pace and mood to the one prior. The effect is like being pummelled by crashing waves. One is left exhausted and in awe.

The performance at the Pigram Garden Theatre in Broome was a community preview. It was a homecoming of sorts, for ‘Jurrungu Ngan-ga’ is a Yawuru kinship concept, meaning to communicate ‘straight’ or speak directly with one another.  Inspired by conversations between choreographer Dalisa Pigram and her grandfather Pat Dodson, Jurrungu Ngan-ga asks: how can we treat people like this? What do we fear within ourselves to allow such cruelty?

Jurrungu Ngan-ga begins with a transfixing, almost liminal solo by Emmanuel James Brown. His crouched form and knotted limbs instantly reveal Dalisa Pigram’s hallmark choreography. Tracking across the stage, Brown’s movements are smooth and measured before shifting subtly into something less composed, his body writhing against an invisible force.

Totally absorbed, the audience is then plunged into a harrowing performance by Chandler Connell as he paces within a cell. Mediated by a live video projection, we observe Connell both on the stage and through a lens of surveillance. Directly referencing CCTV footage from the Don Dale Youth Detention Centre, the scene is a profound example of how to use multi-media to enhance, rather than distract from the physical performance. The content here is confronting and explicit, complete with a restraint chair and spit-hood, yet at no point does it feel excessive or exploitative.

Eleven distinct performances follow these first scenes, each pulling the audience into a different emotional register. There is a remarkable solo by Bhenji Ra, whose robotic enactment of the glitches of white-settler racism introduces humour and incongruity to the mix, while a dance that begins as a solo by Luke Currie-Richardson before morphing into a group performance with Miranda Wheen, Ses Bero and Fera Shaheen, is beautifully tender.

The potency of this work is felt most deeply in scenes with the whole cast. Here, the unique dialogue between the nine performers and their intersecting yet distinct cultural experiences (Indigenous, immigrant, people seeking asylum, transgender and settler) reaches its most meaningful expression. The unity achieved through synchronised choreography and repetition is deeply affecting. Striding out as a defiant collective to a pulsing score, the performers draw on various dance traditions and styles, including Indigenous, Torres Strait Islander, Palestinian, hip-hop, classical, voguing and krumping. Exceptional sound design throughout carries the audience through this ostensibly disjointed approach, while the restrained set design holds space for the intensity of the performances (the use of the chandeliers is masterful).

This is the brilliance of Marrugeku: their capacity to achieve new languages of dance through collaboration. Working with the most dynamic contemporary artists, musicians, sound designers, set designers, poets and intellectuals (including in this case, Behrouz Boochani, Patrick Dodson and Omid Tofighian) the company consistently resists conformity, presenting works of transformative reciprocity.

Jurrungu Ngan-ga concludes in a feverish unravelling and retreat, leaving Feras Shaheen alone for his contorted closing solo. It is a melancholic ending. How could it not be? Don Dale is still in operation. Nine people seeking asylum are still detained in Darwin hotel rooms, after eight years of incarceration on Manus Island. There have been seven Indigenous deaths in custody in the last two months. This is Australia. Jurrungu Ngan-ga speaks it straight. It is a performance worthy of our full attention. It is exquisite and unmissable.

Kate Rendell is a freelance writer and researcher, currently working as Project Officer at Magabala Books in Broome.