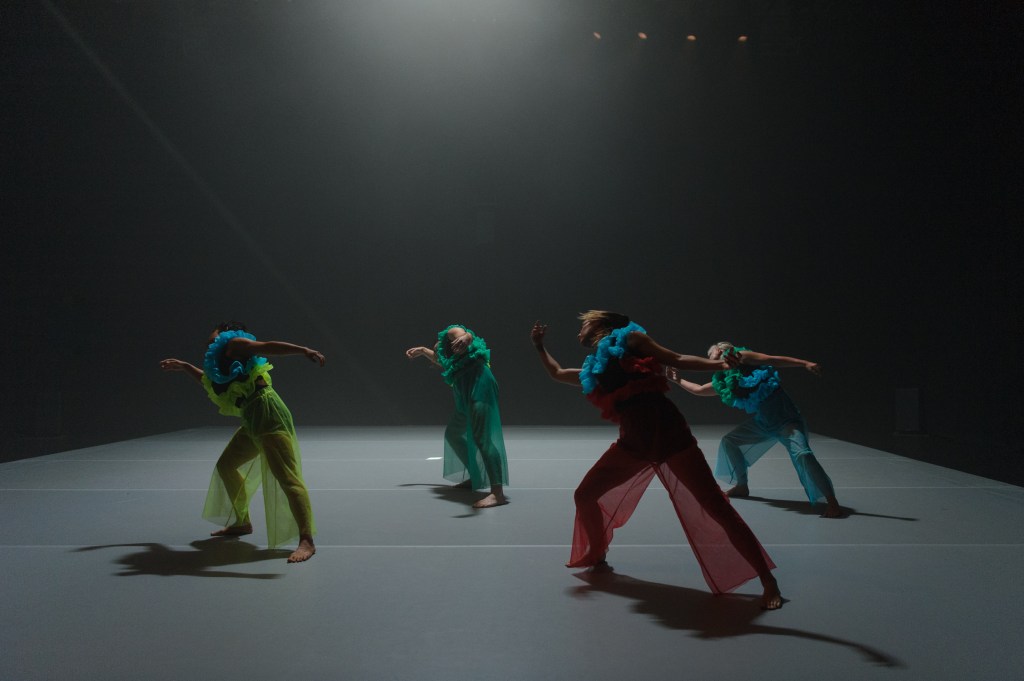 ‘The ease and fluidity of the dancers as they traversed the different movements of the piece was, as always with Guerin, expert.’ Photo by Sarah Walker

Lucy Guerin Inc. has become one of the most esteemed contemporary dance companies in Melbourne since its establishment by the choreographer of the same name 20 years ago. Known for her exploration of release techniques and experimental practice, Guerin’s new work hits audiences with renewed impact on the reopening stages of 2022. Flux Job explores disaster and collective loss through movement, dialogue and audiovisual media. The artistry of this piece lay prominently in the second half, where, Guerin says, the dancers co-created the narrative through monologues that simmered into a startling sequence of rapid kicks, limpid turns and thumping, trance-like weight transfers. Guerin was quoted in The Guardian as saying the choreography is ‘like being possessed’, and the performance certainly seemed to play with the space between voluntary and involuntary; the living and the dead; self-determinism and fate; our inner and outer cosmos.

The ease and fluidity of the dancers as they traversed the different movements of the piece was, as always with Guerin, expert. The four dancers – Tra Mi Dinh, Amber McCartney, Lilian Steiner and Geoffrey Watson – moved through kaleidoscopic primary colours to their own dance phrases. Angular and gooey at the same time, their close dancing, offbeat and to different tempos, had the surrealism of a silent disco. Kudos to Andrew Treloar who designed the costumes: bright and semi-transparent in the first part and black and impenetrable in the second. These garments captured the chaos and the sombreness of the subject matter; the past two years, post-pandemic.

Flux Job was created over the duration of Melbourne’s very long COVID lockdown. After the premiere, Guerin said that the monologues in the final section of the performance were co-created with the dancers over Zoom, and as such they are very successful snapshots of their feelings and memories during a time of strange isolation. The dialogue was compelling and well expressed, something that is not always a given in dance performances; it fit the timbre of the piece perfectly and had great effect.

Geoffrey Watson retold a memory of being at a moonlit party in Europe, and navigating a fiercely different culture of religion and intolerance to diverse sexualities and genders. There were resonances with the other stories, as sinkholes, wolves and other occult images were mentioned; a sense of enigma and despair pervaded the conversation. Behind a long table, lined with makeup mirrors, the dancers painted their hair with powder and lined their faces with creases under the chalk-white light. Credit to Paul Lim for his innovative use of lighting to enhance the drama, and to Adena Jacobs for her excellent dramaturgy.

There was always a glint of hope and potentiality in the production, expressed most clearly in the finale. Here the four dancers, cross-armed and gleaming in the bright light, bourreed, kicked and strutted across the stage in an angular waltz, reminiscent of the Dance of the Cygnets in the ballet Swan Lake. The somnambulant way the dancers performed this tricky pas-de-quatre seemed to be speaking to the remarkable persistence of humanity, especially when we connect with each other at times of crisis.