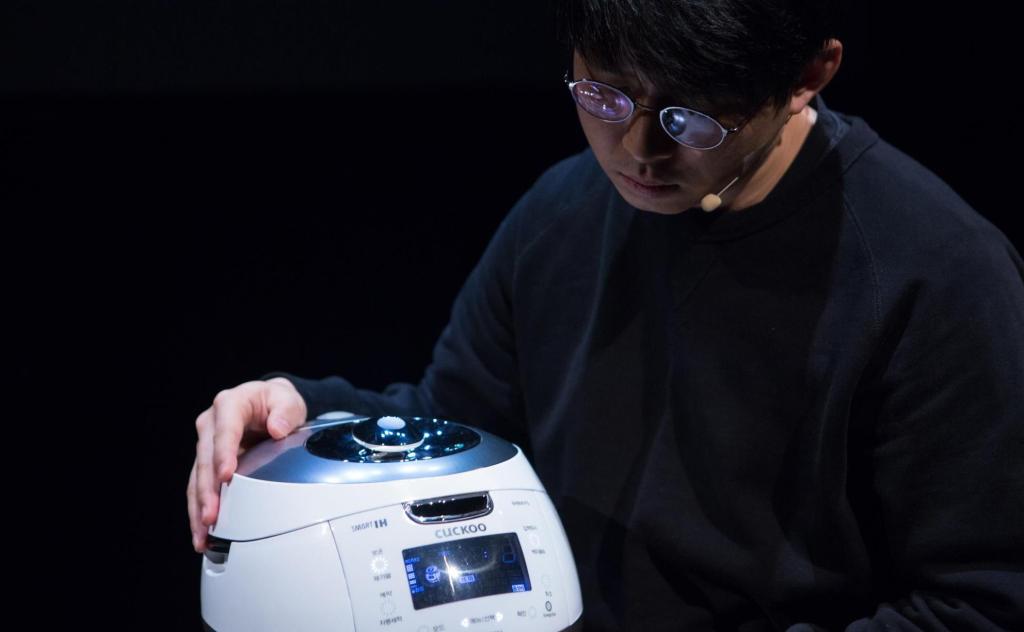 Told in Korean with English subtitles, Cuckoo will travel through Europe after its Adelaide OzAsia Festival season. Photo: Radovan Dranga.

In Cuckoo, Belgium-based writer and performer Jaha Koo tells his story of growing up during South Korea’s major economic crisis. Koo is the only actor, but he performs alongside three quirky Cuckoo-brand rice cookers that help to counterbalance the hard-hitting themes of suicide and misgovernance.

The performance commences with the sounds of protest and – after a pause created by one of the rice cookers – projections of video footage showing police bashing protesters and close ups of injured people. This opening sets up the production as a story of uncensored truth. Koo then shifts into telling personal stories, which are interspersed with commentary from the rice cookers. Koo looks into the heart of what has caused the suffering he has experienced and witnessed.

This storytelling structure demonstrates Koo’s skill in choosing when and how to reveal information to maximize impact. By being shown the horrors first, the reveal of the cause produces a feeling of shock that expands into fury. Koo doesn’t end the show here – instead he emphasises that all of South Korea is hurting in the same way through the story of a young worker. The structure of this performance makes this production an emotional journey that enriches its audience with understanding.

The set and costuming are plain: a black table sits centre stage with the three rice cookers resting on top. The surrounding space is made into a black box with drapes and a projection screen at the back. Koo’s costume includes a black t-shirt and jeans. The simplicity isn’t a failing but rather allows all the focus to be drawn to the performer’s words and the vision on the projector. It also highlights the state that South Korea is in: everything is dark in their lives except the one good thing to come from the economic crisis, the Cuckoo rice cooker.

Koo remains unanimated throughout the performance. He doesn’t smile nor change his tone, creating an atmosphere of melancholy with a matter-of-factness that lets the audience draw their own conclusions. The lack of tonal change also helps emphasise that Koo’s stories are true and there is no changing them; it’s too late.

Music and projected documentary elements keep the performance lively despite Koo’s deadpan performance style, saving this show from becoming a heavy load. The humour of the rice cookers creates space for tension to ease and then grow again. For example, the rice cookers provide a pointed moment when they start to comically fight amongst each other about what they can do and are good at. The argument finishes with the realisation that while the rice cookers may all be able to do something, like South Korean workers during the economic crisis, none of that matters if their world doesn’t need them to do it.

Cuckoo has all the ingredients to be an overwhelming negative story, however with the careful balance of performance style, imagery, music and three unique rice cookers, the production is both entertaining and informative. This show demonstrates what great theatre can do: cut through preconceived ideas to reveal truths that are understood by the audience rather than forced upon them.