Coranderrk is a must see; a painful reminder of ‘what could have been’ in terms of Aboriginal self-determination.
Miro Sandev
[This is archived content and may not display in the originally intended format.] 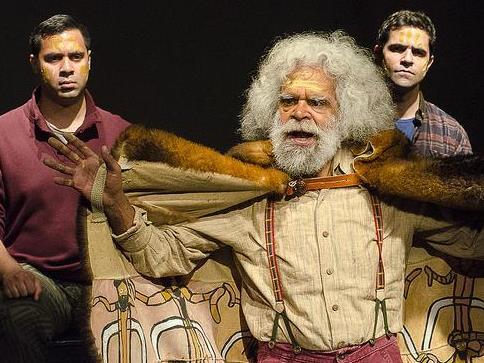 This superb performance is a painful reminder of ‘what could have been’ in terms of Aboriginal self-determination.

Ilbijerri and Belvoir’s collaboration includes an update of the script by Andrea James and Giordano Nanni to include dramatized elements not present in the initial 2011 production, which featured solely verbatim excerpts from the 1881 inquiry into the Coranderrk reserve.

Coranderrk Aboriginal Station was established in 1863 at a vacant spot of bushland in Victoria where members of the dispossessed Kulin people settled down to farm and live peacefully. Soon the Kulin were joined by other displaced indigenous people from across Victoria, growing the population to over a hundred and creating a vibrant and self-supporting community.

With the expansion of European settlement pressing against the boundaries of Coranderrk, the Board for the Protection of the Aborigines was pressured by powerful lobby groups to look at ways of dismantling the station and dispersing the population. The people of Coranderrk responded with a highly effective awareness campaign, petitioning politicians and officials as well as marching on Melbourne to demand self-determination. Eventually the inquiry was set up where white and (for the first time in the nineteenth century) non-white members gave official testimony.

The play draws heavily from these transcripts in a skilful, highly didactic way. The decision to take a minimalist approach in terms of style pays off – the reprehensible racism of many of the whites is laid bare in all its absurdity through the verbatim delivery. With emotionally charged material of this kind there is sometimes a temptation to explicitly condemn the perspectives presented by adding judgemental voices. But here Ilbijerri, through skilful selection and arrangement, have made the language of the oppressor cave back in on itself, full of its contradictions and prejudices, thus condemning itself in a more resonant way than perhaps a dissenting counterpoint would have done.

Another interesting change from the original performance is that now it is an all Aboriginal cast who play all the roles, including those of the white witnesses. This inversion could seem jarring at first, particularly with the hyper-fast recitation speed of some of the inquiry lines. However, in the end, it presents an interesting appropriation of the language of the oppressor in a similar vein to the appropriation by minorities of derogatory terms used against them. Here we have a type of representational empowerment where Aboriginal voices have the freedom to fill any of the roles, both oppressor and oppressed alike.

All of the performances are good, with Jack Charles (playing William Barak) and Kelton Pell (Thomas Bamfield) particularly standing out in a solid cast. The lyrical additions by Andrea James are sufficiently integrated into the verbatim text and break up the tension and instrumentalism of the inquiry scenes, giving the performance a noticeable rhythm. This is a vital Australian story, with the ability to inspire a new generation of utopian thinking – a must see for all.

Miro Sandev is a Sydney-based freelance arts and music reviewer, creative writer and journalist. In addition to reviews he has published poetry and coverage of the media industry.