A strong line-up of artists in a benefit concert to support young people affected by refuge trauma.
Suzannah Conway 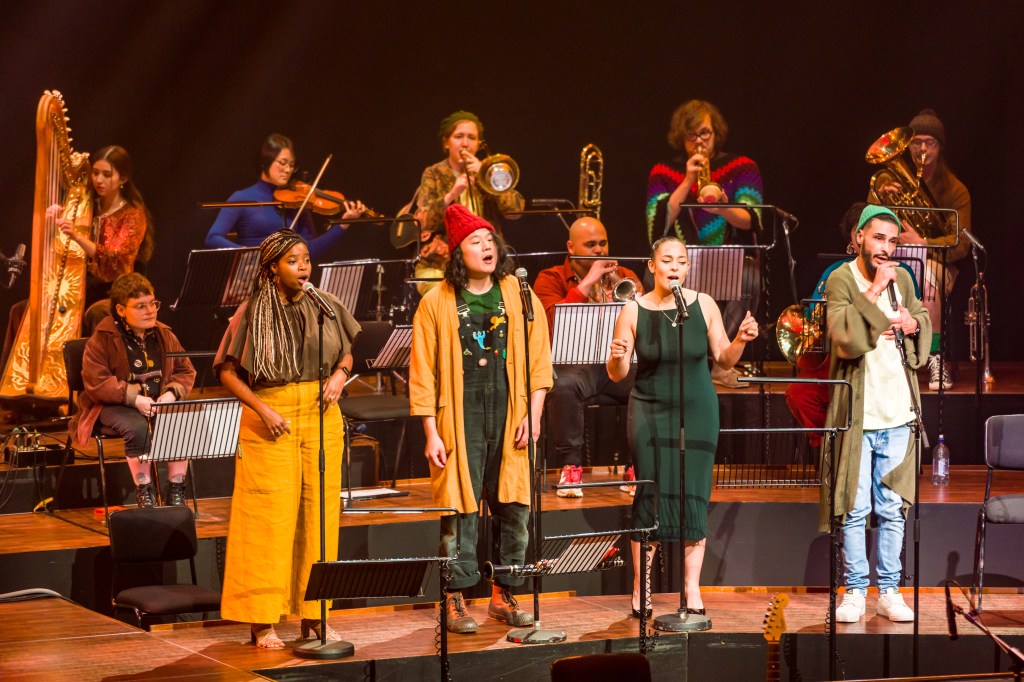 The Queensland Performing Arts Centre’s (QPAC) Songs of Hope and Healing annual concert helps to raise funds and awareness for HEAL (Home of Expressive Arts and Learning), a charity which delivers services in schools in creative art therapy to young people of refugee backgrounds.

The concert was hosted by Mariam Veiszadeh, a human rights advocate and lawyer, who is herself a refugee, having fled with her family from Afghanistan to Australia in 1990. She spoke of the difficulties of adjustment in a new land as a young person and is clearly a passionate supporter of the work of HEAL.

Within the concert format we also heard from a teenage participant in HEAL’s schools’ program, Omal, who came from Eritrea as a young refugee, experiencing both bullying and racism at school in Queensland. HEAL helped her to overcome these problems, giving her confidence to feel comfortable within her own skin and cultural identity.

Although both these reflections were enlightening, additionally HEAL might have produced a short video or film clip of their work with pithy contributions from a range of students and supporters to expand on the breadth of the program offered. While some audience members may have been conversant with their work, a visual overview would have been welcome if the aim of the concert was also to broaden horizons and create awareness.

The concert program itself consisted of songs and contributions from a diverse range of artists and musicians, many from an Indigenous or multicultural background, with an emphasis on hope and healing. The QPAC Chamber Choir, a contemporary community choir under the leadership of Choir Master, Timothy Sherlock, proved to be the backbone of the program.

The 27 members of the choir sang their own songs but also provided backing for artists. They commenced with a spiritually-styled version of ‘Lovely Day’, sung in four parts and with some pleasant harmonies. Later they sang one of the new Abba songs, ‘Don’t Shut Me Down’, enthusiastically delivered and with great joy. Their final song was Innocence, sung by solo tenor, Henry Adam, from the choir, while the other members provided backing. Adam sang this beautifully, with a naturally fine voice. One wanted to hear more from this school student, who already appears to be vocally very talented.

Multicultural group, Jade New World Collective, is a QPAC ensemble in residence and comprises four instrumentalists – an Indigenous didgeridoo player, David Williams, Japanese koto master Takako Haggarty Nishibori, Nepalese tabla virtuoso Dheeraj Shrestha and Australian Spanish guitarist, Anthony Garcia. They performed a stunning piece,’ Ancient Waters’, lovingly crafted, the fusion of instruments working magically together; the delicate tones of the koto combining well with the rhythmic tabla and guitar strumming, overlaid with occasional dark, earthy sounds from the didgeridoo.  A second piece, ‘Fishbowl’, composed by the group while working at QPAC, introduced an electronic keyboard in place of the didgeridoo, resulting in a mesmerising, melodic soundscape that suited the instrumentation.

Contemporary Australian Irish band, Sásta comprise players of the Irish fiddle, electric piano, pipe, accordion/squeeze-box and guitar. Their first piece, ‘Ron’s Time’, started rhythmically slow, creating an authentic Irish sound with fiddle and accordion. It moved gradually to a faster, more traditional jig and reel rhythm in the second half and was very well played. A second slower piece,’ She Said’, featured the guitarist and also vocalist, the pianist playing an ethereal pipe, to create a more soulful and contrasting work.

Indigenous artist, Deline Briscoe, a Yalanji Woman of Song from the Northern Territory, has a hauntingly beautiful voice, playing guitar and singing ‘Sweet Frangipani’ as a moral narrative about the treatment of her family back in the 1920s. It was uncomfortably sad, but refreshingly presented as a way to share collective stories and as a song of healing and was not in the least sentimental. Sung in the Wulngkubarri language, ‘Big Law’ had a similar theme but was more upbeat in tempo with very good accompaniment on drums and percussive instruments from her core band members.

The extraordinary Matt Hsu’s Obscure Orchestra comprises some 20 plus players utilising a diverse variety of instruments from traditional brass, woodwind and percussion, through saws, bottles and other strange-looking and off-beat DIY instruments. The orchestra members themselves are also a culturally mixed group that embrace inclusivity and gender diversity, and include disabled, non-binary and trans artists.’ Runes dans le sable’, an almost classic French song with accordion accompaniment, was well delivered by Lucy, though the cacophony of sound from the orchestra was at times overwhelming.

The second piece,’ Welcome to the Neighbourhood’, was an inclusive song about sharing our differences. There appeared to be chaotic orchestration throughout but with good woodwind and brass playing and it all came together in the end with the last note being played by Hsu with a bow and saw. This is a strange but fascinating orchestral experiment, clearly with a good following and also some pretty good musicians in the mix.

Celebrated soul, blues and rock’n’roll singer, Mahalia Barnes, was the headline act, singing a bracket at the opening and end of the concert. She was accompanied by members of her band, The Soul Mates, with some fabulous playing, in particular from both the guitarist and pianist. She has an astounding vocal instrument and started with a raunchy and powerful rendition of Helen Reddy’s ‘I Am Woman’, followed by a terrific blues song, ‘Ain’t Nobody Else’ where she literally leapt about the stage, encouraging choir and instrumentalists to belt out the music, which was certainly highly infectious.

Her second set started with an equally strong high-octane blues and rock’n’roll sound in ‘Three Times and I’m Gone.’ A slower piece, composed especially for her daughter, ‘Little Light’, offered a gentler contrast with a well written, emotive story. ‘You Are My Sunshine’ was a heart-warming song which included all the artists back on stage and the choir, with everyone singing and playing at full force.

It would have been well to have left this as an upbeat finale to go out on, expressing as it does joyful feelings of love, hope and happiness. Trying to repeat that energy level via a rock’n’roll version of the normally serene ‘Bridge of Troubled Water’ failed to work. As originally written, this would have been a perfect piece to include in the program but with a solo voice, so that the words could be properly heard and digested, and not as a full-blown finale.

Ultimately, this was a good concert with a great variety of artists and musicians engaged to offer songs around hope and healing, which made it also a fun night. More information on what HEAL does might be considered for future fundraising concerts of this kind and perhaps with more attention to detail on the overall musical content, programming and relevance to the theme.