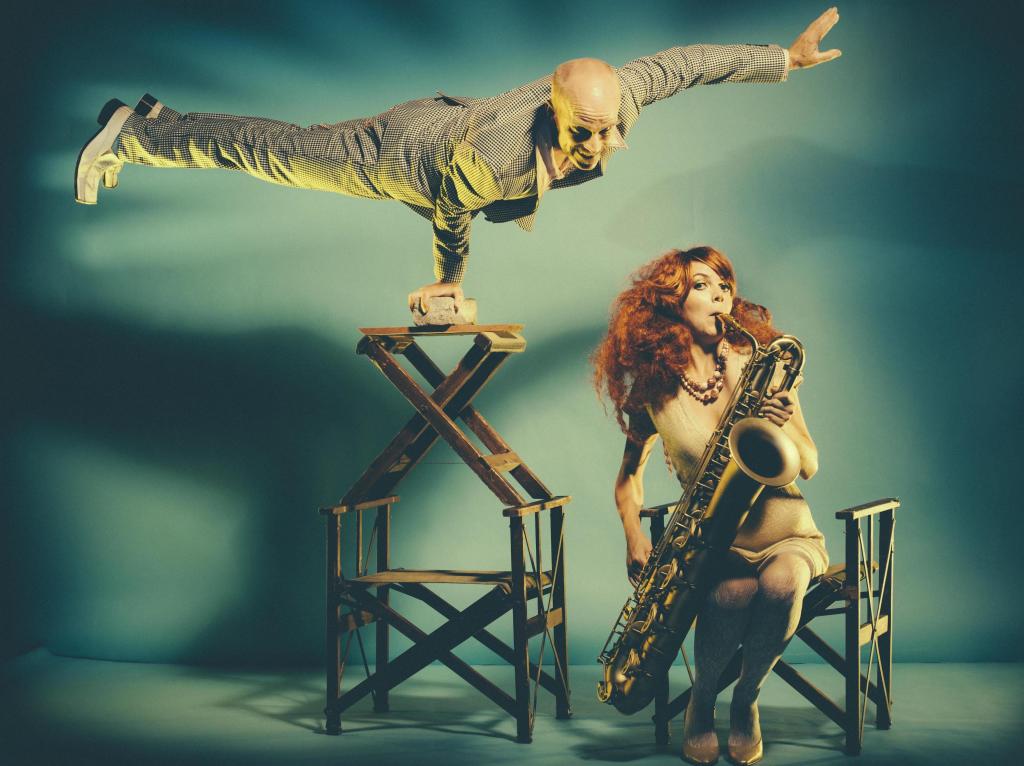 National treasure in circus talent, Circus Oz has brought a new show and concept to their 35th year of captivating Australian audiences. But Wait…There’s More is a lively eclectic mix of stunt-jumping acrobatics, juggling, uni-cycling, flying trapeze and clowning antics as Circus Oz’s vaudevillians do what they do best- entertain.

Entering the big top, the audience is greeted with a rickety old derelict theatre of better days. Performers wear costumes synonymous with traditional circuses popular in the heights of the early 20th century, with sparkling red frocks, acrobats clad in sleek blue leotards, pseudo-clown faces and pin stripped pants held up with suspenders.

However as the audience settles in for an old-fashioned spectacle of circus nostalgia, the contrasting theme of But Wait…There’s More is revealed in a storm of references to consumerism, capitalism, information overload, visual pollution and technology addiction.

Anchored by ringmaster and Circus Oz returning veteran, Matt Wilson, an accomplished acrobat and the circuses narrative presence, Wilson continued commentary is irritatingly repetitive, effectively serving the shows info-soaked agenda. Yet he still remains likeable and Wilson’s fall from the heights of the circus roof at the end of the show is astounding, receiving the biggest cheer of the night.

Original music is catchy and matches the modern, often manic, theme of the production. Music styles interchange between pop, rock and rap to more traditional circus orchestra melodies, heavy on saxophone and piano.

Established cabaret performer and activist, Candy Bowers on lead vocals, exudes natural cool, with impeccable vocal ability and comedic timing. Along with Bowers’ sidekick, Dale Woodbridge, the gifted comedic duo are charismatic and cheeky, appealing to kids and adults alike. Circus Oz’s resident hoopster and strong-woman Lilikoi Kaos also stands figuratively and at times literally above the rest, embodying all that is raunchy and audacious but endlessly charming.

The talent contest concept that appears throughout the night is a welcome point of difference, appealing to the younger demographic. Another impressive feature of Circus Oz shows is that the acrobats and performers also make up the accompanying orchestra. As each act opens, different performers switch roles to support their fellow members in music, further emphasising the unique community culture of Circus Oz.

The narrative of consumerism and the explosion of information is carried through consistently from beginning to end. But at times a bit more subtlety could be exercised, with the message of the night being about as understated as a clown’s costume. While perhaps intentional, the song assumedly titled ‘Stuff, stuff, stuff’ is overworked and mind-numbing. Demonstrating Circus Oz’s approach to performance with a political conscience, more subtle social commentary manifests in signs about asylum seeker rights, while others implore the audience to ‘Enjoy Capitalism’ and advocate: ‘Assimilate: skincare by Australia’.

But Wait…There’s More promises to keep crowds entertained as it props up its big top as it begins its tour across Australia.