Grace and timing and humour and beauty. Humans can be appreciated on many levels.
Thuy On 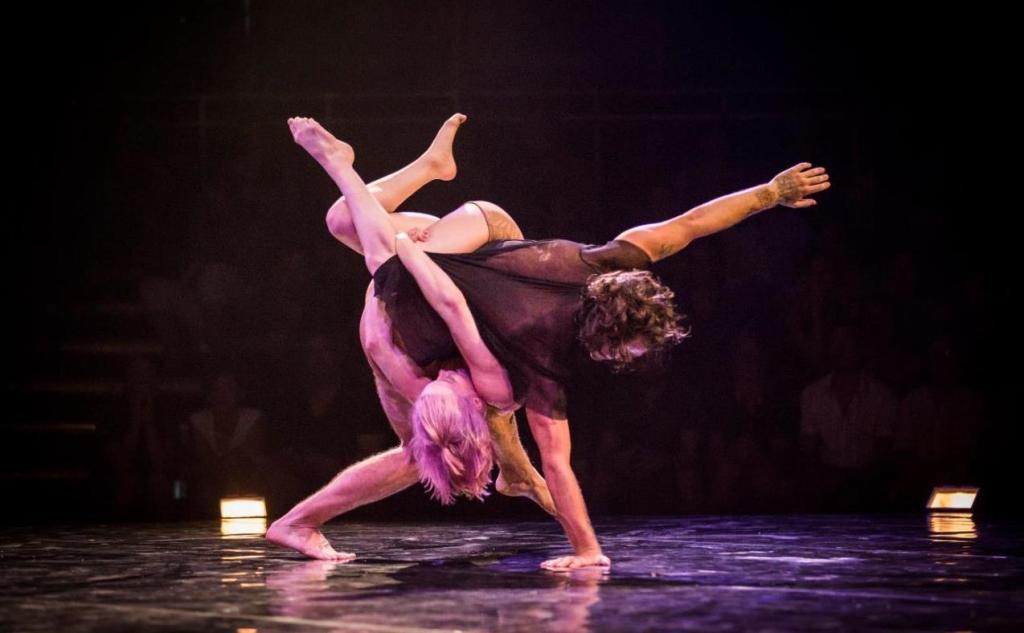 As its title suggests, this production by Circa and directed by Yaron Lifschitz, is above all else, a celebration of the human body. A beguiling and seductive mix of contemporary dance, physical theatre and circus, Humans places ten acrobats (men and women) on stage and stands back to see the various permutations and combinations they can form.

The most notable thing about his show is how pared back it is; there is none of the glitz and glamour of many other circus-style extravaganzas, no sequins and shiny costumes nor complicated sets or equipment. No, the stage is spare. It’s just a large rectangle brightly lit in white. The attention hence, is drawn undistractedly to the people moving and bouncing about in various configurations, dressed only in earthy toned t-shirts and shorts.

It begins with an unravelling, a disrobing as a dancer wriggles and struggles to remove herself from the bondage of clothes. From then on, all the performers crash into, slide along, tumble over, suspend in mid-air. It’s a meeting of flesh and then a disconnection. The line between mock play and mock fight is dissolved. As the night progresses the gymnasts start coming together a bit more cohesively, stacking on top of each other tower-like.There are solo performances as well as pairs and larger group dynamics. Always, you can sense the need for precision and trust.

There is some magnificent rope work – the one concession to props on the stage but the rest of the time the crew use their own bodies as equipment, whether they be pommel horses or stepladders or even skipping ropes.

Against a strings-heavy soundtrack and with stark lighting and silhouettes, Humans is an utterly dynamic one and a half hour show, with tonal shifts between playful (performers try and lick their own elbows to no avail), to inventive (a “marionette” sequence between two closely-bound dancers) to full-pelt frenzied tumbling choreography.

The message of Humans, if there needs to be one, is that we do not exist alone but we are all necessarily reliant on one another and are interconnected.

Grace and timing and humour and beauty. Humans can be appreciated on many levels. There’s the sheer line and contortion of the torso and limbs and what they can do in service of entertainment and sport and the underlying, metaphorical allusions to vulnerability and strength: on equal display.