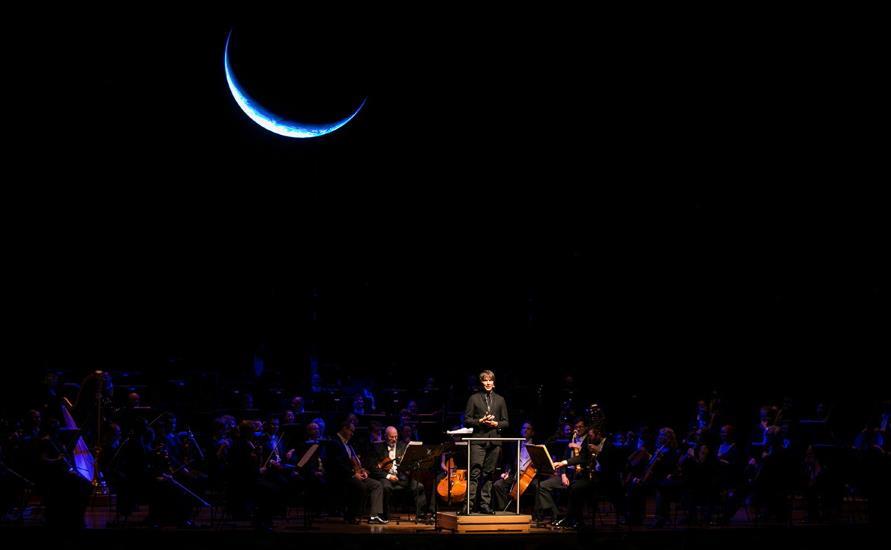 At first blush, classical music and cosmology may not seem like the most obvious pairing, but their relationship has time and again proven to be a symbiotic one, from symphonic works such as Gustav Holst’s The Planets to the frequent of accompaniment of classical music with space documentary footage and film scores heavily borrowing from the classical canon. A Symphonic Universe presented by MSO with guest physicist and science communicator Brian Cox is a program which taps into that appetite for awe and wonderment, presenting sweeping symphonic works interpersed with lectures on cosmology from the guest headliner.

The evening begins with Sibelius’s Allegro molto from Symphony No. 5, a triumphant third movement with hints of Wagner evoking images of mythological figures. The other major symphonic work of the night is Mahler’s Adagio from his unfinished Symphony No. 10. (Perhaps not by coincidence, the influence both works have on certain film composers is readily apparent.) Written as the composer was nearing the threshold between life and death and in a time of emotional turmoil, there is a sense of gravity that undercuts the music, even in the moments of grandeur and majesty. Under the assured finesse of conductor Benjamin Northey, the MSO teases out fresh colours and moods in each of these respective works and performs with such vitality that it’s almost as if we’re hearing it for the first time.

Rounding out the musical offerings is the world premiere of A Brief History of Time by Australian composer Paul Dean, a work for violin and orchestra commissioned especially for this event. Inspired by the life of Stephen Hawking, it’s described by the composer as more of a tone poem than a concerto and the effect is suitably jarring and disjointed. A Brief History of Time presents a novel range of orchestration and bowing techniques, but seems less like a standalone work than soundtrack music or an etude for orchestra. It demands a very high level of skill from both soloist and orchestra. Soloist Jack Liebeck on violin plays his part faultlessly; the technical mastery and close coordination between soloist, conductor and orchestra is enough to keep us in the audience interested in the piece.

Gauging from the makeup of the crowd and the size of the applause when Cox first appears on stage, the (literal) rockstar physicist is a major draw for much of the audience in the venue. When he speaks, it becomes readily apparent that his popularity is well-justified. Affable, eloquent, and engaging, he describes ideas and drops trivia in cosmology and physics in a way that’s accessible to a general audience without any conspicuous dumbing-down. His seamless and almost rhythmic manner of delivering his didactic monologue makes you wonder how much of his work as science communicator is informed by his past stint as a keyboardist in the rock band Dare.

The respective pieces that comprise the A Symphonic Universe are each world-class and the program combining music and physics is nothing to complain about, but I was a little disappointed to see such little integration between the cosmology lectures and the music, and what appears to be minimal effort on the stagecraft aspects of the concert. While works by Sibelius and Mahler certainly don’t require fancy pyrotechnics, given the premise of A Symphonic Universe and given that there was already a screen on stage, the experience might have been improved by videos instead of static images accompanying the music and more evocative lighting. In turn, some live background music – nothing too distracting – to add atmosphere while Cox was speaking wouldn’t have gone astray.