A solid attempt to make sense of what's happening on the local and international political stage.
Susan Francis 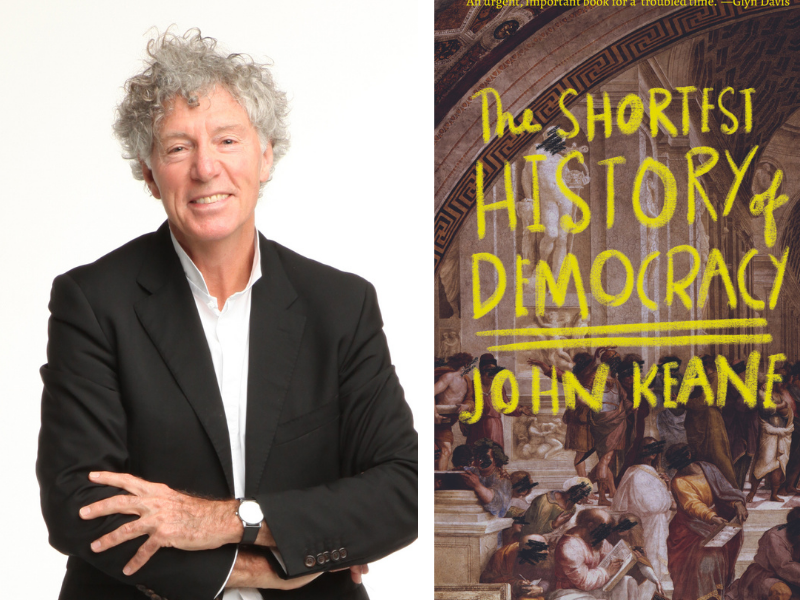 John Keane’s ‘style is accessible and entertaining while the length is as advertised – short.’ Photo supplied.

Last week, a number of people drowned in their own homes in northern NSW as government support failed to materialise. At the same time, a report was released about our inadequate public health system in remote Australian communities, resulting in charges of racism and unnecessary fatalities. In NSW, the number of individuals infected with COVID started to rise once more, a new Omicron sub-variant, BA.2 the culprit.

We heard about assisted-living facilities for the elderly closing due to lack of staff. People rocked up to the bowser to discover they had to pay more than two dollars a litre for fuel. And then Putin marched into Ukraine. Thus, when John Keane states in his book, The Shortest History of Democracy, that ‘The spiky defence of democracy running throughout these pages draws strength from the remembrance of the fallen,’ a frail sense of hope surfaces that perhaps humanity hasn’t yet fallen down a crevasse from which there is no return.

Professor of politics at the University of Sydney, shortlisted for the 2010 Prime Minister’s Literary Award for Non-Fiction for his book, The Life and Death of Democracy, and most recently nominated for the Balzan and Holberg prizes for outstanding global contributions to the human sciences, Keane attempts to make sense of the world’s current political stage.

‘What’s happening to democracy…’ he asks. Why are ‘big league democracies sliding towards a precipice, dragged down by worsening social inequality, citizen disaffection and the rot of unresponsive governing institutions?’ It’s an understatement to claim that his question is well-timed. It’s a question for which many people want an answer.

Structurally, the book is divided into three sections, outlining three historical forms of democracy: Assembly, Electoral and Monitory. With interesting and sometimes unique examples, Keane ties each type of government to great and small acts of humanity and atrocity, arguing that as fluid as our reality might be, democracy remains as the inconstant provision for ‘a more equal world of wellbeing, openness and diversity…’

He writes almost romantically about the subject of where and why democracy began and how it progressed: ‘… during the first year of a global pandemic, the total wealth of billionaires in countries such as India, Sweden, France and the United States more than doubled. Almost every democracy is feeling the pinch of the old rule that capitalism and democracy are ultimately incompatible…’.

His style is accessible and entertaining while the length is as advertised – short. The confidence with which he outlines his subject matter, also offers reassurance to readers who are watching the universe unravel, while a number of world leaders appear to stand by, with hands stuffed into their trousers.

If the first chapter is interesting because it shines a light on unfamiliar political history, and the second highlights a democracy recent enough to be recognisable, the final section remains gratifyingly accurate in its examination of the ‘conjoined twins,’ of multimedia and the ‘watchdog platform’ of monitory democracy, where power becomes ‘publicly accountable’ through ‘anti-corruption watchdogs… medical councils, war crimes tribunals, peer review panels.’ Simultaneously, Keane describes the notion of ‘elective despotism,’ where the criminal actions of leaders such as Trump and Putin mean voters are becoming disaffected and democracy is questioned as it never was before.

The Shortest History of Democracy could be a disheartening and depressing read, but it’s not. Even if politics is not your thing, Keane’s identification and explanation of the political world feels like our current confusion, exhaustion, resentment and horror are finally acknowledged. And surely, that’s a beginning that we desperately need right now?