'The F Team' presents a perspective on Lebanese Australia that is an overdue addition to the #LoveOzYA bookshelf.
Julia Faragher 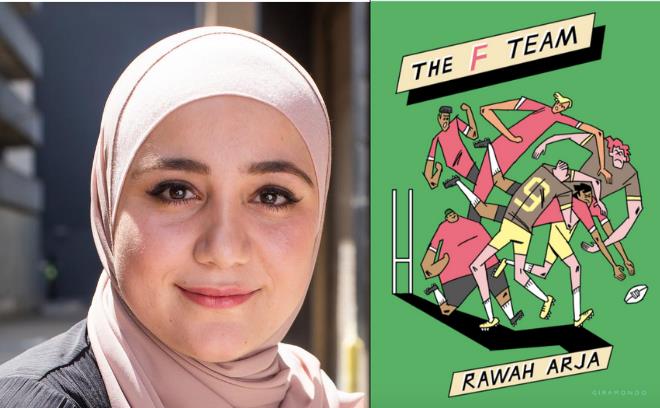 The F Team is an #ownvoices novel from debut author Rawah Arja about a group of four Lebanese boys who participate in an inter-school football tournament to try and save their Western Sydney school from being shut down for good. The story is narrated by Tariq, captain of the ‘Wolf Pack’ as he learns how to navigate family, friends and relationships. It is one of the many Australian perspectives that is an overdue addition to the #LoveOzYA bookshelf.

The main character of Tariq has a compelling voice that demands attention. He is strong-willed, loyal to his friends and seemingly fearless. The novel opens with Tariq’s introduction to his world and the cast of characters in his life. A real highlight is the description of his family, including his father who loves to live the Aussie dream, eccentric Uncle Charlie with a shed full of his pet bees, 27-year-old sister Feda in the final year of her medical residency and eight-year-old Amira for whom everyone seems to have a soft spot. Arja sets up the story in a rich and vibrant world that captures the essence of teenage life in Australia.

However, the novel suffers from being too long in certain parts. Scenes often feel repetitive and drawn out, like the endless rivalry between Tariq’s F Team and football rivals the A Team and Tariq’s battle to regain his captaincy. Several interesting questions are raised over the course of the story, but most are not resolved until the last few chapters.

In a novel so celebratory of an authentic Lebanese-Australian experience, Arja’s decision to name a Vietnamese character ‘Lee Lin’ is jarring. Instead of giving the character one of the 14 surnames held by 90 per cent of the Vietnamese population, he has a Chinese surname. And while the character could have Chinese ancestry and come from a mixed race background (which sprung to my mind immediately, as a mixed race Vietnamese reader with a Manx surname), Lee refutes this possibility in his first appearance, declaring ‘I’m Vietnamese, by the way, not Chinese’ in response to racist comments made by other characters in the scene.

The racism towards Lee is present throughout the entire book, as the four Lebanese boys refer to him only by the nickname ‘Nintendo’, which is a Japanese video game company. This even continues when Lee emotionally describes how his father came to Australia by boat from Vietnam. The boys are never called out for their racist behaviour; after another comment to Lee about how all Chinese people look the same, the teacher present merely laughs. In painting a world of vivid Lebanese-Australian characters, it is disappointing that Arja has not taken a similar level of care with one of her secondary characters.

The four boys do not seem to grow much over the course of the novel. Their sexist and racist comments are found in both the early and final pages of the book and much of the conversation between the boys is injected with toxic masculinity. Sometimes they get called out for it, but often not. Arja’s story of what it is like to grow up Lebanese-Australian is damaged by its showcase of racism towards other marginalised communities in Australia without criticism or consequences.