A chronological journey through the lives and crimes of world-changing women.
Nanci Nott 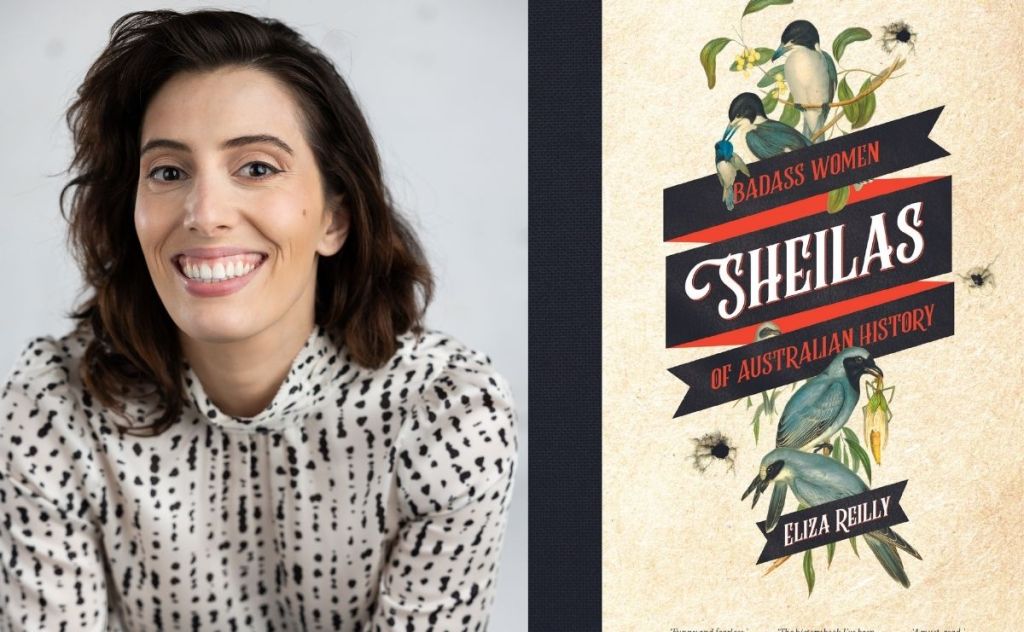 Sheilas: Badass women of Australian History is an acerbic exploration of civil disobedience, competitive swimming, and the revolutionary setting of personal boundaries. From bushrangers to mermaids, this beautifully illustrated girls-only gathering redefines what it means to be a good Australian woman.

Debut author Eliza Reilly introduces us to Mary Ann Bugg, a daring Worimi bushranger from the 1880s, who rescued herself from an orphanage by becoming an infamous outlaw. Next, we are transported to 19th-century Melbourne, where we meet Catherine Hay Thomson, a literary legend who spent decades exposing the terrible treatment of sex workers, advocating for single mothers, and shedding much-needed light on disturbing medical practices. Deborah Lawrie helps us answer questions like, ‘How do periods make planes harder to fly?’ (spoiler, they don’t) while Annette Kellerman, Australia’s first mermaid, reminds readers that women’s beauty is never decreased by the presence of physical strength. Not that the reader needs reminding of this fact, especially after learning about the train-bombing, hatchet-throwing, parliament-chaining antics of suffragette besties, Jennie Baines and Muriel Matters.

Not all the sheilas in this book are avid corset wearers, or rangers of the bush. Faith Bandler, First Nations advocate, was stalked by ASIO on her way to use a payphone in the 1960s. Rosaleen Norton – artist, writer, philosopher, witch – was arrested in 1928 for being way cooler than everyone else. Unashamedly sex positive, Norton’s self expression was often mistaken for blasphemy, and her art for sheer obscenity. Books of her work were banned and destroyed, and her paintings were torn down for being controversial. Witchcraft was illegal back then, so she took a bit of initiative and started her own coven, as badass sheilas are wont to do.

Reilly’s subversive wit draws attention to the multitude of absurdities intrinsic to Australian history and culture, transforming historical hypocrisy into educational comedy. She reveals barbaric truths about men penning women into asylums like livestock, and – using a 1970s not-to-do list – teaches her readers that spousal rape wasn’t criminalised in Australia until the mid-1990s. Misogyny and violence aren’t inherently funny, but laughter is considered a universally appropriate response to shock, horror, and the fragile masculinity of whiny blokes balking at the thought of menstruating pilots. If anything in this paragraph reads as offensive, I recommend you avoid this book; much like 19th-century doctors recommended women avoid sport, due to (and I quote) potential ‘loosening of the uterus.’

Playing with language as well as history, Reilly’s jokes are never at the expense of the women she writes about, who are meticulously researched and affectionately portrayed. Hitherto unmentioned sheilas-of-the-book include (but aren’t limited to) Olympic gold medallists, ground-breaking aviators, angry spies, and fighters for beer-equality. These trailblazing women are vividly resurrected through stunningly funny prose, delightful vintage photographs – and drawings of birds for some reason.

Reilly’s irreverent writing is never generic. If her tongue-in-cheek approach doesn’t make you want to bathe in the tears of misogynists, her creative use of anachronistic simile certainly will. This book is highly recommended for history-loving rebels with a penchant for exposing corruption. And their daughters. Be warned; there will be laughter.