Beilman and Tyson have a rare genius for interpretation.
Gillian Wills
[This is archived content and may not display in the originally intended format.] 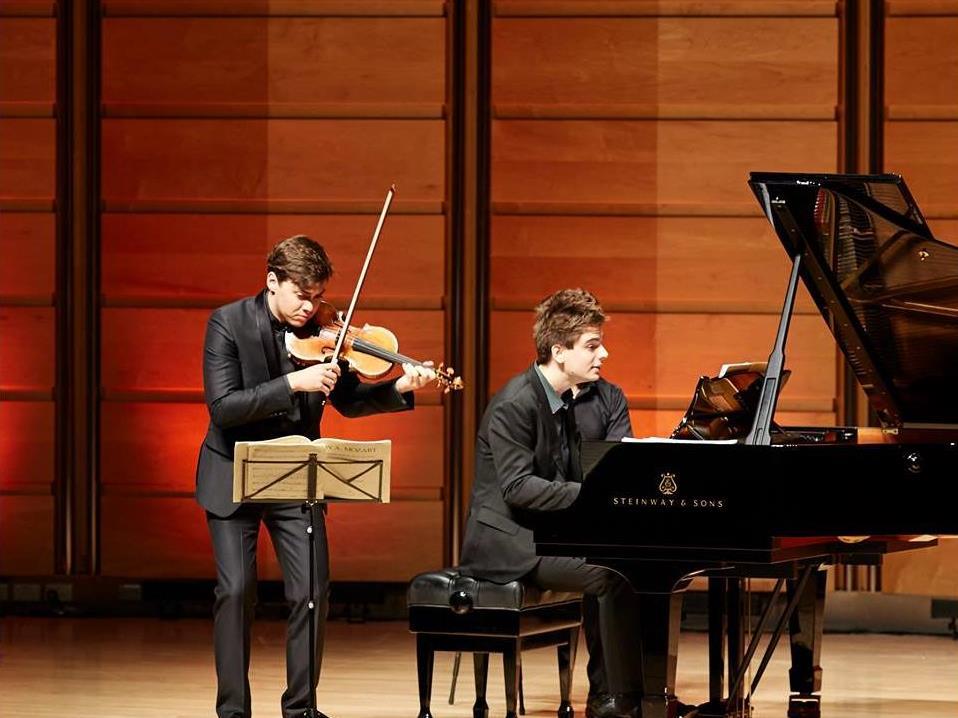 Benjamin Beilman on violin and Andrew Tyson on piano. Photograph by Keith Saunders.

Standing on stage before their recital, Beilman and Tyson looked like any other average, smart-suited, well-meaning Americans in their mid-twenties right? Wrong. They are extraordinary, brilliant musicians. For when Beilman fired the violin and Tyson powered the Grand, the audience were ensnared and beamed back in time to 1787, a year in which Mozart was all over song-writing. Don Giovanni hails from this creative period as does the songlike, Violin Sonata in A Major, Opus 526 with its terrifying, finger-taxing piano part allegedly, say the musicologists, written for Mozart to perform.

And Beilman and Tyson are not only supra-gifted virtuosi with musical pedigrees that can fling open the doors of any major concert hall in the world, they have a rare genius for interpretation, an inspirational genius for communicating vividly bold confessional reveals of programmed repertoire, spiriting each work into life, illuminating meaning with an empathetic insight so acute it’s as if they have lived several lifetimes.

Mozart’s Sonata was never pushed beyond the musical limits of the eighteenth century and the structure and elegant Mozartean mannerisms were beautifully illustrated. And while Musica Viva’s subscription holders are accustomed to buffed and polished resurrections of Mozart’s chamber music, in the hands of Beilman and Tyson, the Mozart was reborn, an intense ear-hugging, sunny wonder of seamlessly spun lyricism, glorious tone and a staggering virtuosity that beggars belief.

These players are every composer’s dream. The stunning world premiere of Jane Stanley’s exacting Cerulean Orbit gave this Australian composer’s compelling, imaginatively cast work powerful ‘wings’ and the work stood proud in the company of Janacek’s and Saint-Saens’ Sonatas.

Violinist Beilman’s instrumental voice can sing, fly, speak, snarl, squeal and whisper in a galaxy of colours. His searing account of the Chorale theme towards the summing up of Janacek’s raw, pointy Sonata supposedly referencing Russia’s advance into Hungary after the First World War was uncanny. Shiveringly and eerily beautiful. Unforgettable.

Tyson has been dubbed ‘a poet of the piano’ and yes, ‘yawnarama,’ the tag is a corny one yet in his case accurate. For he spins magical lyricism, murmurs rapidly rippled tides as a supernaturally hushed backdrop, sails through the ferociously, concerto-like cascading technicality in Saint-Saens’ Sonata in D Minor and out of nowhere spears into spiky tonal savagery. There’s nothing old school or remotely shrinking violet about Tyson’s pianism. He is every bit an equal, a soloing foil to Beilman’s violin. The rapport between them is amazing. Tyson’s ears are on stalks and, when he turns his head towards Beilman be warned, the pair’s unison accents have enough bounce and thrill to make the theatre tremble. When this Duo reaches Australian shores again be sure to check them out for their recital was a towering success.