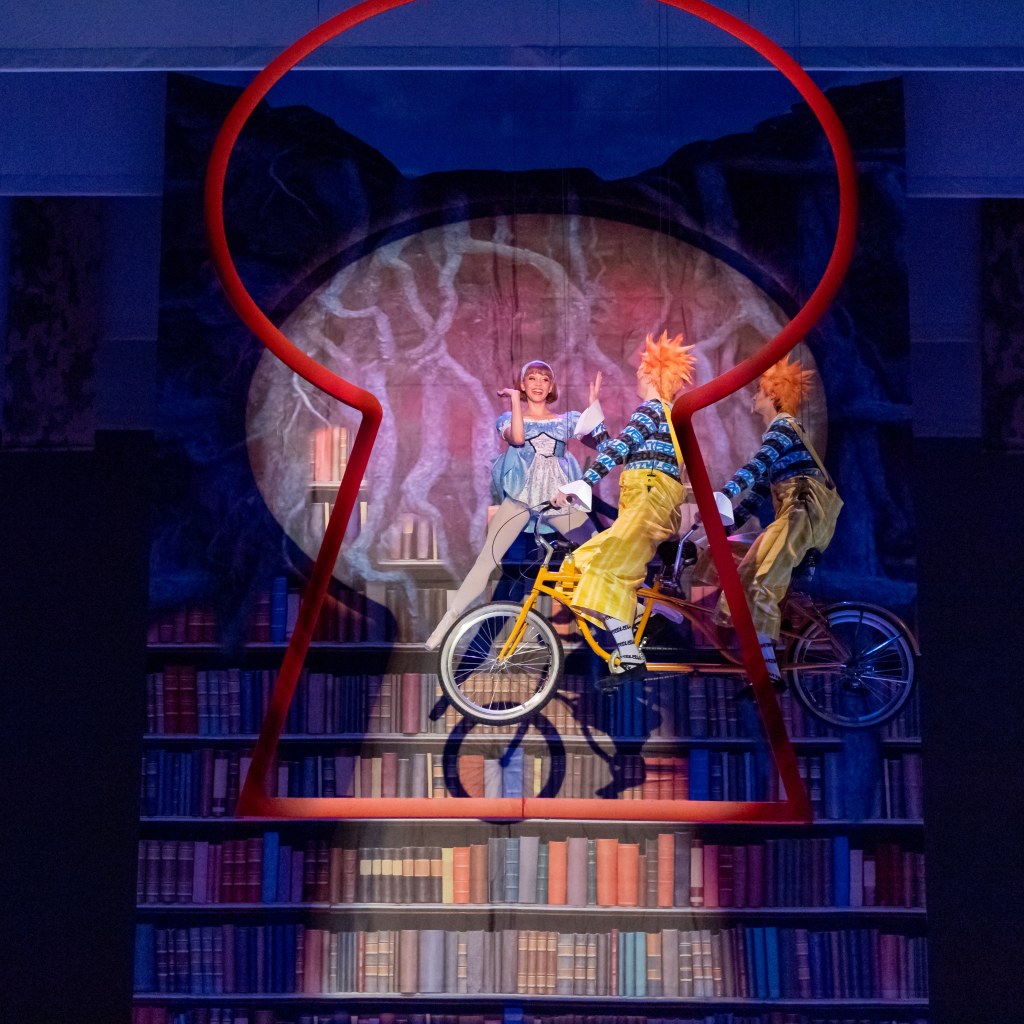 Carina Roberts as Alice with Adam Alzaim and Matej Perunicic as Tweedledum and Tweedledee. Picture by Bradbury photography.

ALICE (in Wonderland) by The West Australian Ballet, is a colourful theatrical spectacle certain to delight and entertain people of all ages.

The production is a reimagining of Lewis Carroll’s novel, Alice’s Adventures in Wonderland (1865) that was written in a genre that could possibly be called literary nonsense. Carroll’s story abounds with sophisticated absurdities, delightful characters, and the disruption of logic for fantastical ideas that somehow make sense. The production elements of ALICE (in Wonderland) successfully combine to recreate the sensation of tumbling ‘down the rabbit hole’ into the fullness of a nonsensical fantasy. The performance is a rollicking adventure with utterly unexpected modulations of sound, colour, design, and movement.

Choreographer Septime Webre has playfully and masterfully crafted movement phrases which tell stories within the story. Artistic Director of West Australian Ballet, Aurélien Scannella, writes in the program notes that ‘Septime’s style blends classical shapes with neo-classical choreography and a hint of contemporary movement.’ The choreography is indeed rich with nuance and is technically challenging for company dancers who embrace their roles with obvious enthusiasm. The inclusion of ‘Child Guest Artists’ adds a delightfully clever element, enriching the narrative and charming audiences.

Carina Roberts (Alice) dances with sustained energy and control. Her steadiness supports the flamboyance of other characters, and we are drawn into Alice’s story through Roberts’ reactions to her many quirky and unexpected encounters. Glenda Garcia Gomez (Queen of Hearts) dominates the stage with power and passion. Asja Petrovski shines as the sinewy Caterpillar – her lithe form snaking and twisting with elegant dynamics. The dancing Flamingos are endlessly entertaining, the choreography reminiscent of Swan Lake.

‘We’re all mad here’, says the Cheshire Cat to Alice in Carroll’s story. In the ballet, Roberts’ pas de deux with Matthew Lehmann (Cheshire Cat) is a beautiful madness, a stunning technical virtuosity.

Matthew Pierce’s musical score shimmers with innate vibrancy and unexpected liveness: a perfect score for Webre’s choreography. The West Australian Symphony Orchestra’s performance of the music is an utter delight and conducted with exceptional skill by Jessica Gethin.

Yet it is the set design by the award-winning James Kronzer and costume design by Liz Vandal (Cirque du Soleil) which will leave you breathless with wonder. Each scene change is an explosion of colour, texture, and image; seamlessly integrated with Eric Van Wyk’s inventive puppet designs.

Lighting designer Clifton Taylor has expertly collaborated with Webre to ensure lighting enhances the choreography, subtly shifting moods with unexpected colours and tones to drive the narrative from one scene to the next.

Flying Director, Dylan Trujillo (Flying by Foy), is also to be commended for the aerial effects. The theatre rigging is impressive, enabling composition of movement in aerial sequences, ranging from Tweedledum and Tweedledee riding a tandem bicycle through the sky, to Alice soaring the heights, and the Caterpillar rising to unfurl turquoise wings that almost span the width of the stage.

ALICE (in Wonderland) is a theatrical spectacle designed to entertain – and it does! If you are feeling a little world-weary, the performance will restore your love of the story ballet and the theatre as a magical place. You may even discover, like Alice, that ‘It’s no use going back to yesterday, because I was a different person then’, such is the power of the theatre arts to usurp the mundane through masterful dance.

ALICE (in wonderland) will be performed until 21 May 2022