A Midsummer Night's Dream. More of a Nightmare.
Tomas Boot
[This is archived content and may not display in the originally intended format.] 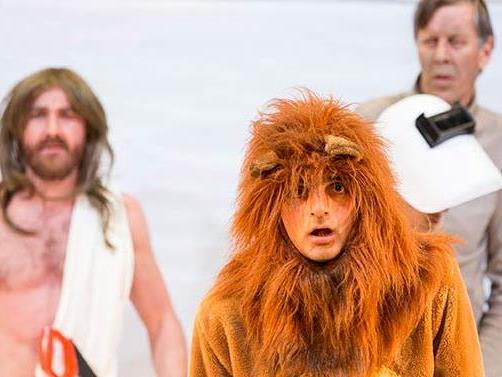 This is the most dour reading of A Midsummer Night’s Dream that this reviewer has seen, which is not to say that it was bad, but it was certainly different. I expected half-farce and manic capering through the forest, and what I got instead was something far more modern, far more sinister, and far more psychologically deep. Funny?  Not so much.

Director Kip Williams has made a name for himself recently with some brilliant interpretations of classic plays – especially his upbeat Romeo and Juliet on a revolve stage of a couple of years ago (for instance one detail that sticks in the mind from that play being the priest having a hydroponic garden).  Here, he has eschewed the clean but somewhat busy lines of modernity for complete minimalism, with a stark duo-coloured black and white set designed by Robert Cousins – Robert Cousins of Pygmalion a few years ago, with the complete black set.

The play begins with Hermia (Rose Riley) being shuttled into a marriage with Demetrius (Brandon McClelland), a man she does not love, by her father Egeus (Bruce Spence) and the overbearing Duke Theseus (Robert Menzies).  She instead loves Lysander (Rob Collins), while Helena (Honey Debelle), would rather Demetrius, if she might be so bold.  Theseus’ wife, Hippolyta (Paula Arundell) is a notable presence on stage throughout all this, but has nothing to say.  The entire scene takes place behind a theatrical scrim, which gives an otherworldly and detached feeling from the action.  It’s when the lovers flee to the forest that the scrim is raised, and Puck (Matthew Backer) can begin his mischief.

The mechanicals, here lead by Peter Quince (played by Susan Price), and ably filled out with many others including Bottom (Josh McConville), also take to the forest to rehearse their new play for the upcoming wedding celebrations.  Oberon and Titania, the fairy royalty locked in a bitter lover’s tussle, will have none of each other’s wishes, and so their fight extends to the poor humans trapped in their midst.  Confusion abounds.

It is the mechanicals where the true mirth of this production is, with their play-within-a-play at the end being a true breath of fresh air.  They roll out their makeshift set of girders and white tarpaulin, and the tragedy of Pyramus and Thisbe plays out in front of everyone, complete with a blood red industrial spray gun for added gore – and also to cover the terrible acting.  (Pyramus and Thisbe, a tale from Ovid’s Metamorphoses, was one of Shakespeare’s main inspirations for Romeo and Juliet).  But Bottom has all the right to be a bad actor, as just the day before his transformation into an ass involved a Godfather-esque donkey head, along with blood, blood, and more blood to drip down his half-naked frame.

Indeed, just about everyone gets close to nudity in this production, with the four human lovers in the extended chase scene all stripping down to their underwear – tighty whities for the men, and white sports-bra and bottoms for the women.  There is something inherently funny, of course, about a man in tighty whities, but here, after the 50 minutes or so of psychological realism and trauma, it didn’t quite make the sides split as it might otherwise have had.  And that is what this production focuses on – the trauma of all that’s happening.  Oberon comes across as a jealous man driven to the extreme of basically giving his wife some sort of date rape drug to coerce her into sleeping with Bottom.  Which, when one thinks about it, was always the implication of the play if you looked at it close enough, but I have never seen it so forcefully realised.  Menzies plays it as less of a prank and more a cruel machination.  The same goes with the four lovers, who seem to be utterly miserable for most of their time in the forest, rather than the merely confused that I have seen in other interpretations.

Chris William’s score underlies most of the play, and it is a musical world of deep bass and gloomful thrums.  Everything is tense and in stasis with his soundscape.  Kip Williams, in his director’s note, states that they specifically tilted ‘the scales in favour of the tragic’ in this production, and he has certainly achieved that – this is a play with a united purpose.  But is it engrossing?  For this critic, it wasn’t, for the most part.  Puck and Titania were the highlights, however, with Puck’s mere reactions as he stalked invisibly around the stage often more interesting to watch, and Titania’s ethereal grace a force to be reckoned with.

Far from a nightmare, but neither a dream I wish to return to with haste, there’s gold in this, but you need to sift to find it.