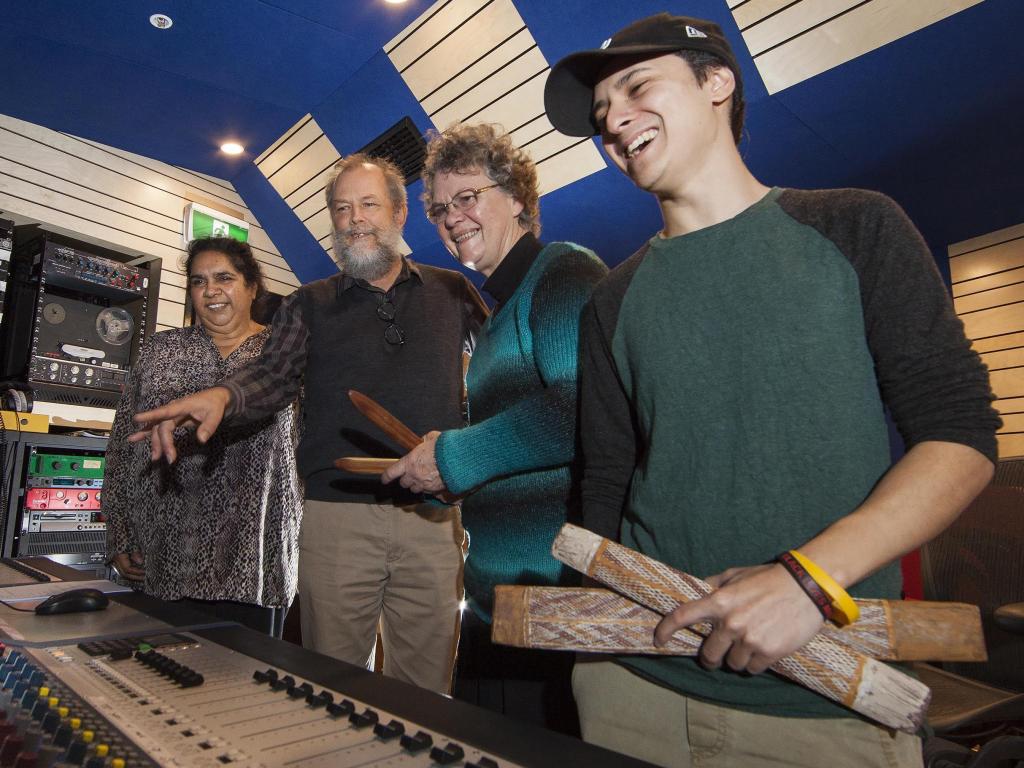 When we started Ngarra-burria First Peoples Composers program in 2016 it was an initiative to support our Aboriginal and Torres Strait Islander composers working in scored music formats and new music styles.

Our goals were to foster the development of participating composers, make industry connections and enable Indigenous composers to be heard more broadly. This meant exploring paradigms of working with the composers such as where cultural agency sits, the articulation of Indigenous culture and contemporary narratives through new music and exchanging knowledge.

I’m a composer and a descendant of the Dharug people, and after heading up the program for three years I’ve documented the journey and made recommendations to our new music sector in a new Platform Paper published by Currency House.

Five Indigenous composer participants – Rhyan Clapham, Brenda Gifford, Tim Gray, Troy Russell and Elizabeth Sheppard – took part in the initiative in 2016-2018, workshoping compositions. Facilitators included composers Kim Cunio and Kevin Hunt and myself. Yorta-Yorta composer Deborah Cheetham has also just joined us as a mentor for the 2019-2020 round of composers.

The Platform Paper goes into my own background, and the fact that at times in new music circles my heritage and identity were dismissed. Even as a fair-skinned Koori, I considered this at odds with some Australian composers using Indigenous music or cultural aspects in their works, as part of the search for an Australian identity or sound.

On cultural agency, various examples arose within our rehearsals, workshops and recordings with Ensemble Offspring that really helped the team focus on what cultural agency actually is and how to articulate it.

One was in a section of Brenda Gifford’s Gambambara piece where a clapstick figure is repeated.  Discussion unfolded along the lines of ‘cut it out at such and such a bar, as it’s too insistent’. Yet Brenda wanted it there and, after to-ing and fro-ing, it stayed in. Brenda shared that in the old times the women could play the clapsticks and contribute in this way, and that this was a section where she had engineered into the score Indigenous women’s enablement.  Bunuba man Fred Copperwaite, co-artistic director of Moogahlin, stated that relevance must in such instances be valued above excellence. Mind you, it was excellent in any case.

Another instance of cultural agency is expressed in the titles of Elizabeth Sheppard’s works. She uses two languages in all of her titles – her Indigenous language and English, representing the two strands of her life. For example, in her Yoora Tattoo piece, the first word means clapsticks, and the second refers to English military percussion. It’s simple and beautiful. It’s hers to use, whereas non-Indigenous composers in my view shouldn’t assume cultural agency by using Indigenous words in titles without respectful engagement.

Significantly, no composer in the program drew upon Indigenous culture apart from their own local language and culture. This signals something for other Australian composers, some of whom have willy-nilly used a word from one Indigenous culture, a melody from another, but not a culture of which they’re a part. Whilst folk music or culture could be a resource for all Australians, Indigenous music is not a part of Australian folk culture. It’s a very different situation.

Rhyan Clapham is concerned about language reclamation. In an instrumental piece Pitara Yaan Muru-wariki he artfully uses four words from his Murrawarri language of the Brewarrina region. He uses the rhythms of the words and the contours of the words to shape both his rhythms and melodies in the music. Through this he passes language reclamation into the hands of the ensemble, and then to all of us as listeners. It is simple, deep and respectfully inclusive of all Australians.

Pertaining to the four words, he assigns one to each different instrument in the quartet. One word means ‘person who does not listen’, and this part is engineered to play across the other parts at various points in the piece, plausibly suggestive of wider Australia and the Indigenous voice.

Rhyan and Troy Russell have an innately complex sense of rhythm, as evidenced by some of their pieces. Over the years I had come to realise that there is a loose sense of rhythm and phrasing by some Indigenous musicians. For instance, one may play through a piece and the lead singer/guitarist may drop a beat and bring a phrase in early, or add a beat. When playing through a second time, this truncating of a phrase or adding a beat or even a bar may happen at a different point. I relate it to the lived adaptability and fluidity that many Indigenous people know. I hear it in some Indigenous music, and I wonder whether Rhyan and Troy‘s rhythmic sense partly stems from this.

The program has staged four concerts and you can listen to some performances and composer interviews as part of ABC Classic FM’s New Waves podcast.

We anticipate that the Indigenous presence in the new music scene will grow and that the sector – and audiences – will embrace the diversity of Indigenous peoples.

This essay is based on Platform Paper 59, Ngarra-Burria: New music and the search for an Australian sound, launched this week by Currency House.

Dr Chris Sainsbury is the author of Platform Paper 59, Ngarra-Burria: New music and the search for an Australian sound. He is an accomplished composer, music educator and musician.  Sainsbury is a member of the Dharug nation (the Indigenous people of Sydney) and has been working in Australian music for over 35 years.