As artists confront the 2015 Budget cuts to the Australia Council, looking at the history of arts funding controversies can help us navigate forward.
Deborah Mills
[This is archived content and may not display in the originally intended format.] 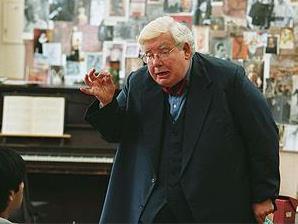 Richard Griffiths, in The History Boys.

Last week in Sydney over 150 people came together to identify shared objectives around national cultural policy frameworks, whole of sector advocacy and growing the investment in the arts.

The assembly was weighted in favour of people under 40, which was encouraging, and was organised by #Freethearts: a dispersed network of individuals and organisations woven together by the indomitable Feral Arts.

Before things got started I was in conversation with a young man who was surprised to learn that this was not the first time that funding for artists and the Australia Council had been under attack. I recalled the behind-the-scenes wrangling in the mid 1980s between Arts Minister Barry Cohen and the then Chairman Professor Donald Horne over the Minster’s request that the Australia Council cut its administrative expenditure in order to provide ‘companies of excellence’ with indexation.

During the 1990 election campaign the Shadow Minister for the Arts Senator Chris Publick, promised to abolish the Council and set up advisory boards within the Department because having an independent arts council was a ‘betrayal of the Westminster principle’ (The Arts Council of Great Britain, established in the cradle of the Westminster system, still exemplifies the arms length principles of arts funding).

The Council accused Publick of ‘an act of cultural vandalism…….at a time when the nations of Eastern Europe are abandoning state control of the arts.’[i]

Unfortunately this flouting of the separation of powers is apparent in a number of areas of public policy today. The Minister’s establishment of the National Program for Excellence in the Arts could be interpreted as his desire to foster his own view of excellence.

His behaviour is at odds with the usual squeamishness with which Australian governments of all persuasions approach the issue of the involvement of the state as a significant force for cultural development.

Two brave attempts have been made to develop an Australian arts and/or cultural policy. The first attempt, Creative Nation led by Prime Minister Paul Keating, was launched in 1994 and dismissed by the incoming Coalition Government. The second attempt, Creative Australia, led by Simon Crean, Minister for the Arts, was launched in 2013 and dumped by the Coalition Government later that same year.

We are left with an invisible policy which is only visible in the actions or inactions of governments and their agencies such as the Australia Council.

The Howard Government also overcame its squeamishness to fully exploit this policy vacuum and expand the range of ministerially controlled funds while attempting to suppress artistic content if it smacked of dissent.

In his 2005 Philip Parsons Memorial Lecture, Australian author and journalist David Marr described how Through the Wire written by Ros Horin, then artistic director of Sydney’s Griffin Theatre, was denied funding to tour from the Arts Minister’s Playing Australia Fund:

‘What appears to have happened at the meeting of Playing Australia last year was this: despite the show having a very high score on application, the Minister’s representative persuaded the committee not to recommend it for funding on the basis that it was not yet a fully fledged production. Other shows were rejected at the same meeting on the same unexpected grounds… In the industry there’s little doubt that Canberra was simply not going to back a politically unpalatable show’.[ii]

Such intervention was not restricted to the performing arts. The Howard Government’s attempts to control the exhibitions and programming of the National Museum are described by David Throsby as ‘more interventionist than any Labor government has been’[iii]. When the now defunct New Media Board of the Australia Council funded five video artists to make a video game called Escape from Woomera in 2003 this drew strident criticism from the Liberal Minister for Immigration, Philip Ruddock and his Arts Minister colleague Kemp. When the New Media and Community Cultural Development Boards were abolished by Kemp in 2005 on advice from the Australia Council speculation was rife that the recommendation had been made on prompting from the Minister’s office.

During the 1980s and 1990s there was a consistently vigorous and well organised opposition to threats to Australia Council funding under the aegis of organisations such as Actors’ Equity, the Arts Industry Alliance and later Arts Action Australia’s redoubtable Mary Travers. No such organised opposition was evident when two arts policies were dumped or the arts received significant cuts in the 2014/5 budget.

This is changing. It was thrilling to be at the #Freethearts Forum and feel the mood shift from anger to calculated opposition, to hear people announce that their commitment to activism was now informed by a wider set of strategic options and to see new alliances forming between different parts of the sector as a new generation discovered the power of collective action.

Obviously a national policy needs to reside in government and should be articulated by its politicians and agencies. However given our unfortunate history in this regard perhaps the capacity for policy now lies apart from government; with that array of individuals and organisations with a stake in cultural policy.  Perhaps then, we can conceive of a cultural policy framework which is envisaged and articulated by these communities of interest who may then educate governments on the necessity for such a policy.

Deborah Mills was the former Director of the Community Cultural Development Board of the Australia Council and is a freelance cultural worker. She has also held position of Director Policy and Strategy at the Arts and Health Foundation.