Crowdfunding acquisitions: the next fundraising trend

Our museums use social media to stimulate audiences, so why not use technology’s reach to grow their collections?
Gina Fairley
[This is archived content and may not display in the originally intended format.] 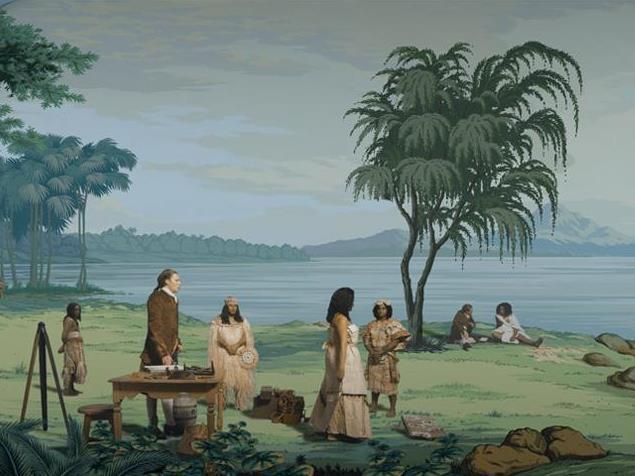 Detail of Lisa Reihana’s four-channel video in Pursuit of Venus [infected] 2015 is the recipient of QAGOMAs 2015 Foundation Appeal.

Institutions have always “crowdfunded” acquisitions in that a well-heeled known set of supporters willing to open their wallets when asked by the director have created a public source of revenue for buying new works.

But today crowdfunding is allowing public galleries and museums to massively broaden that support, tapping a new source of revenue for particularly appealing projects.

Let’s be clear on definitions here. “Crowdfunding” has a very specific contemporary definition: a campaign run online for a finite period of time to raise a targeted amount with incremental “rewards” for giving. They are high demand, semi-personal and, despite largely being successful, can be an enormous drain on a small organisation.

Crowdfunding is booming among small independent artists, particularly filmmakers and musicians. At Remix Sydney this week Jayant Murty, Director Strategy Media and Integrated Marketing for Intel Asia Pacific, cited dance projects on Kickstarter as a glowing example of the new trends in sponsorship relationships, with the funding success rate sitting at 97% for dance projects. That is a statistic that would make anyone listen.

In the last two years major institutions internationally have turned to crowdfunding acquisitions and programming to bolster government and private giving, with ever increasing shortfalls.

The Louvre has been the most ambitious with its crowdfunding campaign started in October 2014 to raise €1 million to assist the purchase of a jeweled piece of 18th-century furniture, Teschen Table (priced at €12.5 million). There were the second major French organization that turned to crowdfunding that month alone; the Musee d’Orsay launched a campaign asking €30,000 to help finance the €600,000 restoration of Gustave Courbet’s painting L’Atelier du peintre.

The Louvre is known as the institution to have the most crowdfunding experience. ‘Since 2010, it has received more than €4 million from almost 20,000 donors for acquisitions of a medieval painting and ivory statuettes,’ reported Samantha Hurst on artnet.

The U.S. has also embraced the trend. Museums such as the Smithsonian in Washington, D.C. have turned to crowdfunding for this first time, using a San Francisco-based site Razoo.com (a town that beats to a tech tune) to raise $US125,000 for their exhibition Yoga the Art of Transformation.

‘While federal taxpayer funding covers some of our costs (mostly operating costs, such as keeping the galleries clean and the lights on), private and public support — whether from donors, sponsors, or grants — cover the majority of expenses related to exhibitions and programming,’ was the museum’s funding pitch to potential donors on its crowdfunding site.

And early this year we witnessed 4A Centre for Contemporary Asian Art’s extremely successful campaign to fund the Yangjiang Group’s Actions for Tomorrow project, which was endorsed by the Swiss market giant Art Basel.

As yet, Australian cultural institutions have been slow to embrace the capacity of their online audience to fund their activities.

Art museums have been nurturing an online audience and sites for boutique giving have been growing. Shouldn’t our cultural organisations be turning to wider support networks rather than just its pool of known suspects, one better reflective of its charter and growing audience?

The impetus for this piece was a recent email received from the QAGOMA Foundation Fund. While the verbiage around the appeal states that anything from $2 can be donated, and that you can even donate online, at this point it has not taken the “crowdfunding” route as we know it. There is no invitation for further involvement other a tax break on the donation – oh, and come and check it out as it’s currently on show.

ArtsHub asked Gallery’s Director Chris Saines why they didn’t go the next step – this work seemed the perfect moment / match for crowdfunding: ‘QAGOMA would definitely consider crowdfunding where broad-based fundraising was the best fit for a particular acquisition or project.’

‘For our annual Foundation Appeal, at least for now, I continue to think that a traditional fundraising model is the most focused way to connect with our established donor base, as well as introducing new audiences to the concept of arts-focused philanthropy,’ he added.

‘Along with all the tradition elements of fundraising campaigns, direct mail, EDMs, etc. the Gallery uses social media to support its annual Foundation Appeal. The Appeal video is shared across all of our social media platforms (Twitter, Facebook, Instagram, FourSquare, Youtube, Blog post) as a way of engaging and reaching out to a wider audience, often through cross-sharing. Lisa Reihana’s work, this year, is about as fit for purpose as you could imagine for this kind of campaign,’ said Saines.

Curiously, looking at QAGOMAs twitter feed on the day of the appeal announcement, it was cushions for sale at the gallery shop and a flood of David Lynch activities – the only mention of the Riahana acquisition appeal was a retweet of another media source’s tweet.

Is it enough today?

Research surrounding new forms of giving – and that includes crowdfunding – has shown that people want to be more involved.

Saines told ArtsHub: ‘Educating new, younger audiences on the benefits of philanthropy was the driver of the recently established QAGOMA Future Collective, which brings together 18 – 40 year olds who share a passion for art and culture. The entry level is much less than full Foundation membership and that alone helps to build the inter-generational pathways to ‘giving’ that organisations like ours are all striving for.’

Most of our state galleries now have young patron levels – it’s hardly a new concept; I remember joining the MCAs in the early 1990s. The more current conversation is how technology is being used to better capture potential donors and how the culture of giving has different demands today than that of yesteryear’s “champagne set”.

Saines said that the very nature of the Foundation Appeal is that it is a public appeal to build the State Collection. ‘We welcome all levels of philanthropic support… whatever their capacity. It’s a great way of building collective ownership in a work and it helps to foster the habit of a giving within your community of interest.’

While there has been much banter about the merits of crowdfunding, and its pitfalls – most contemporary among them the kind of fatigue we are experiencing from this new “wonder” fundraising model – we have learnt a lot from this recent funding model.

The crowdfunding success of the French institutions followed fierce government funding cuts to the arts. Perhaps our institutions across the board need to take a closer look at these international successes and approaches – and failures – as a more layered approach to expanding our donor reach, especially in the light of Australia’s funding crisis. Oh, and for the skeptics – The Louvre was successful in raising its million through crowdfunding.

The 2015 Foundation Annual Appeal was launched at the Queensland Art Gallery on Saturday 9 May. Over 80 guests came together to hear the artist in conversation with QAGOMA Director Chris Saines and Maud Page, Deputy Director, Collection and Exhibitions, as it premiered at the Gallery. in Pursuit of Venus [infected] will be on display at the Queensland Art Gallery until early 2016.