112 artists vie for this year's Archibald, Wynne and Sulman prizes. Who will win Australia's most prestige gongs? We offer our thoughts.
Gina Fairley 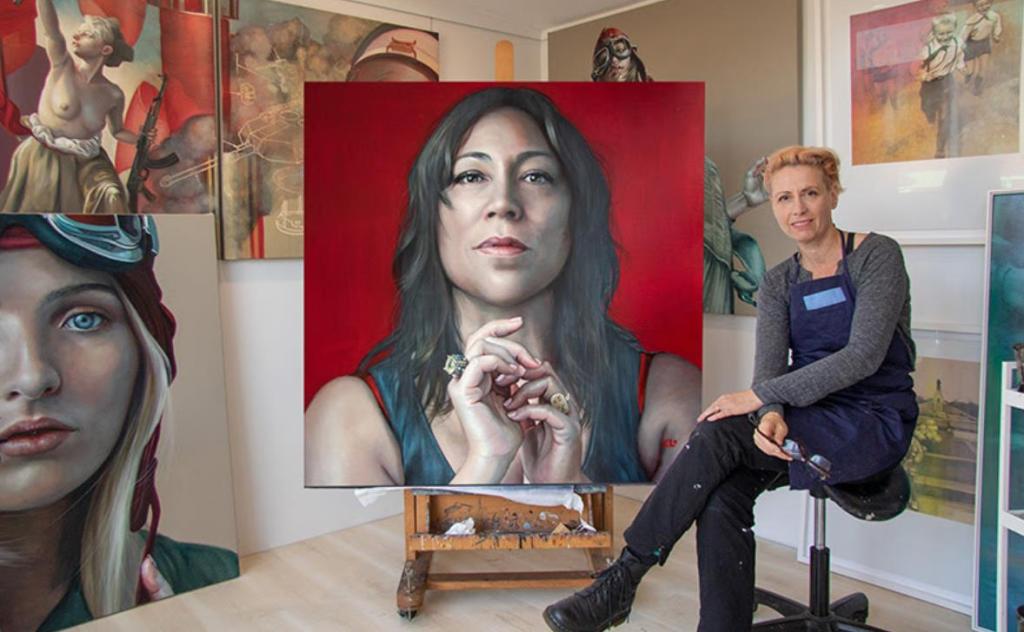 While the Archibald Prize was established in 1921 – and celebrates its 100th anniversary this year – it was only in 1946 that the Trustees of the Art Gallery of NSW (AGNSW) insisted upon pre-selecting works. Prior to then all entrants were hung.

But in the growing verve for portraiture, more than half of the entries were eliminated in 1946, and the finalists’ exhibition was born. Today artists in the run for the Archibald, Wynne and Sulman Prize were revealed for another edition.

Overall entries were slightly down on 2020, which was a record year across the three prizes, and largely a reaction to pandemic lockdowns.

This year, 938 entries were received for the 2021 Archibald Prize, with 52 making it into the finalist cut, or 6%. The record stands with 1068 entries set last year.

The Sulman Prize received 546 entries, with 21 finalists. It will be judged this year by artist Khadim Ali.  And the Wynne marched in with 660 entries, and 39 finalists, 20 of which are Aboriginal artists, making this the most in the prize’s history.

Digging further into the statistics for this year, across the 112 finalists 58% were women artists and 54% male. It is the first time also that the balance has kicked in favour of women over that 100-year journey.

A statistic that is also interesting each year is the number of first time finalists. We often label these exhibitions as predictable – a pool of the usual suspects – but with 43% first timers for the Sulman, 41% for the Wynne and 31% for the ‘Archi’, it would dispel popular belief.

Today, that honour went to Kathrin Longhurst with her portrait of singer Kate Ceberano.

Ceberano said of the work: ‘I feel the painting expressed my concern for the future, but I still feel strong. Like a proud “Mohican”. Especially today when so much of my work is being taken away by a culprit unseen and yet so calamitous!’

She continued: ‘The artist and musician are essential to the world around us. We sing or paint our way through trauma and depressions and enable others to feel acknowledged for their existence by giving them a context without words. During the sitting we discussed this a lot and I felt uncharacteristically sober … I had just come out of 14-day hotel quarantine and I felt fragile and burdened with more change than I could handle at that time, so much to process.’

I hate to say it, but there are some pretty scary, clunky pictures in this year’s Archi finalists, that lack the finesse and resolve one might expect of a prize of this calibre at $100,000.

Increasingly, the Sulman and the Wynne are prizes to watch as a more interesting lens to the concerns, trends and social mores explored by artists working today.

OUR PREDICTION FOR 2021 ARCHIBALD PRIZE

What: A portriff of Adam (Shane Simpson AM)

Why: In recent years, the Archibald Prize has been a platform for shifting its own past, with a number of ‘first’ awarded.  Should Thom Roberts take this year’s Archi it would be another, as one of Studio A’s artists and proudly working as an artist with intellectual disability.

But a box tick is not enough for a win of this stature.

There are other factors weighing in on this portrait. Shane Simpson AM is almost as synonymous within art circles as the Archibald itself, special counsel at Simpsons Solicitors – a law practice specialising in arts and entertainment cultural property and copyright, and long serving board member for many organisations.

Roberts taps into an energy that captures Simpson, in the most distilled way, ticking the gongs of the prize conditions but also demonstrating that within the vast realm of portraiture being grand or photoreal isn’t exclusive to ‘a likeness’.

Studio A is one such organisation that Simpson has supported, and where Roberts met Simpson – both there from the organisations start. He describes: ‘I wanted to do a portriff of Adam on a great big canvas. He’s like my big brother.’

Roberts calls Simpson ‘Adam’ rather than Shane and considers him ‘the boss of this place’. Signature also to Roberts’ portrait is his style of depicting people with four eyes – another example what he says, ‘I do it Thom’s way’.

It would not be the first time that AGNSW has led with inclusive programming, with a long running access program and last year as part of Archie Plus, it commissions Studio A to create an epic hand-painted mural by seven neurodiverse artists (of which Mathew Calandra, a 2021 Sulman finalist, was one).

In 2013 Roberts was awarded an Amplify emerging artists grant. He was part of the 2014  Underbelly Arts Festival on Cockatoo Island, in 2017 created new work for Big Anxiety festival, and most recently was included in The National: New Australian Art 2019 at Carriageworks.

A real contender to take the win this year is Benjamin Aitken, with his whopping portrait of Melbourne artist Gareth Sansom. He has been the subject of three previous Archibald Prize portraits, and is a imposing figure in the art world, head of painting at the Victorian College of the Arts for eight years then dean from 1986 until 1991.

James Powditch again makes the list with his portrait of Kerry O’Brien, another solid painting that sits high in the crowded field of entries. A veteran finalists, he consistently puts up paintings worthy of the win.

Peter Berner’s self portrait Stop pouting, you’ve had your turn is solid, as is Jonathan Dalton’s portrait Ramesh and the artist Ramesh, of ceramicist Ramesh Nithiyendran. And Peter Wegner’s Portrait of Guy Warren at 100 is a great inclusion, but a little too quaint as a win this anniversary year.

OUR PREDICTION FOR 2021 WYNNE PRIZE

What: Adventure and folly (ii)

Why: For me the Wynne was a harder pick this year. For the past five years we have witnessed the prize being awarded to First Nations artists. It somewhat signals a need to mix it up, given that the landscape genre is not exclusive to an Indigenous lens.

In some ways Nyapanyapa Yunupiŋu’s enormous Garak –night skyearth pigments on bark, is a stunning painting, and follows her major survey at Museum and Gallery Northern Territory (MAGNT), so logic says her painting is a sure win. However, we are going to predict a shift this year – what almost might be the antithesis of Yunupiŋu’s painting, with William Mackinnon’s enormous painting Adventure and folly (ii).

He says of the work: Adventure and folly (ii) references time spent in the powerful Kimberley region, but it is an invented landscape. For me, landscape painting is more about what is going on inside me.’

It has a stacked vernacular of Asian scroll painting but is executed in automotive enamel, oil and acrylic in a real mash up – nice.

The painting taps a feeling we are all faced with, as Australia’s ever-hotter summers and increasingly frequent, devastating fires force us to consider our impact on the environment. Mackinnon knows this first hand – his home was destroyed in the Ash Wednesday bushfires, but he takes a philosophical approach: ‘fire creates regeneration and opportunities for growth and change.’

We want to give a nod to the two sculptures included this year PhilJames’ Spun Idol and Tracey Deep’s Tree spirit with its charred wood form tapping collective memories of the bushfires. IT is an elegant piece.

The optical movement is Warlimpirrnga Tjapaltjarri’s painting Untitled is transfixing and immersive, while Julianne Ross Allcorn’s Thesaurium insula (treasured island), pushes and pulls between a traditional botanic art vernacular while tap[ping into the zeitgeist of climate concerns and Anthropocene conversations around our connection to our environment and the role we play in its survival.

OUR PREDICTION FOR 2021 SULMAN PRIZE

What: Construction zone, a wall-based object made from polyurethane on steel sheet.

Why: I first saw one of Selwood’s Perspective cutouts about a decade ago, during a studio visit organised by Watters Gallery and I was transfixed by their spatial play, oscillating between 3D and 2D illusion. (He now shows with King Street on William gallery).

He first started making these works back in the 1980s, so one argument might be that we aren’t seeing anything new with this Sulman entry, however, there is a refinement in this series that takes the viewer on a journey through an object.

They seeming defy mass and gravity. But these works are not just about space; they are also a very resolved consideration of surface and light.

Selwood says of his series, ‘when, drawing for a sculptural idea, I decided to cut away the background, leaving only the object depicted in order to better consider it as a three-dimensional form. Realising the potential of the enhanced illusion this produced, I made several more cut-out drawings in paper before deciding to make one in steel, my preferred material for sculpture.’

We have to remember the Sulman is awarded to either a mural, genre or subject painting, which may feature figurative, still-life, interior or figure-in-landscape themes. For the context of the Sulman a mural is defined as ‘a picture fixed directly to a wall or ceiling as part of an architectural and/or decorative scheme’ – bingo!

Paul Selwood was born in 1946, in Sydney. He first studied sculpture at the National Art School (NAS) graduating in 1965. Arts education would be a constant parallel (now UNSW Art and Design), Newcastle University and NAS.  He has presented over 38 solo exhibitions.

Among the finalists this year, we pay a nod also to John Bokor with his delightful still life, Rosé and lemons; Chris O’Doherty aka Reg Mombassa calling it frankly with his Gum trunk with koala (sure to be popular); another Studio A artist Mathew Calandra with his watercolour and ink triptych Stations of the Cross, Ted May’s The kiss as a solid contender and Lucy Culliton’s Carina’s bogong moth jumper (of which she wears in her self-portrait among Archibald finalists).

Finalists in all Prizes will be exhibited at the Art Gallery of NSW from 5 June to 26 September 2021. Ticketed.