Australia loses two legends within weeks of each other – senior Aboriginal artists, Michael Jagamara and Kunmanara Lewis – both leaving an incredible legacy that shifted the landscape of Aboriginal art forever.
Gina Fairley 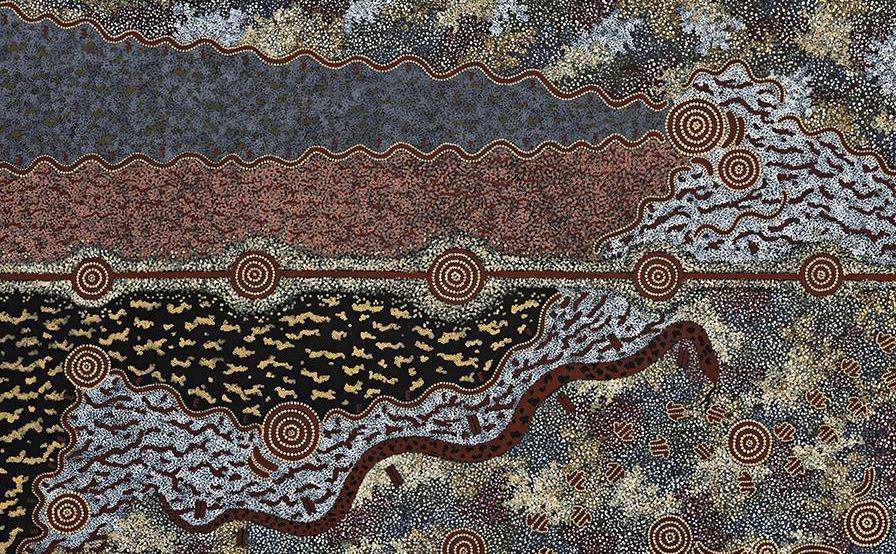 Michael Jagamara Nelson’s painting Five Stories of 1984 is one of the iconic images of modern Aboriginal art. Image Fireworks Gallery and courtesy the Jagamara family.

Born a year apart, both senior artists made a phenomenal contribution to the landscape of Australian art, and have been incredible ambassadors for the Aboriginal Art Sector, and its development.

Jagamara (also spelt Tjakamarra) was a Warlpiri man, born at Vaughan Springs, about 100 km west of Yuendumu (NT). His father was an important Warlpiri Medicine Man.

Cooeeart writes: ‘Nelson was frightened by his first sight of white men as a young boy and remembers hiding from them in the bush.’

Jagamara moved to Yuendumu as a boy to receive a European education at the mission school. But after initiation at thirteen, he left to work as a cattleman and joined the army. He returned to Country, and eventually Papunya in 1976 where he married and worked in the government store.

While Jagamara wasn’t the first artist to start painting at Papunya (largely giving birth to the Western Desert style in 1972), he might be argued as one of its most well-known. In 1983 he was asked to join Papunya Artists as a full-time member.

His career trajectory and celebrity was steep.

It was then that Australian artist Imants Tillers appropriated the painting to create the work The Nine Shots (1985), in a postmodern gesture and with Jagamara’s knowledge. The work was shown in the 6th Biennale of Sydney curated by Nick Waterlow in 1986. The Biennale was concerned, wrote Waterlow, with ‘the artist as transgressor, the artist as code cracker’.

They became friends, and went on to collaborate on 24 paintings together since 2001– posting them between Papunya and Cooma in regional NSW where Tillers lives.

Later in 2016, Sotheby’s London sold the iconic painting Five Stories for £401,000 (AUD$687,877 at the time), doubling its top estimate and setting a record for an Aboriginal work of art by a living artist.

And in 1987, Jagamara was commissioned to create a 8.2 metre mural for the northern foyer of the Sydney Opera House.

The year following (1988), his major mosaic work (196 square metre) for the forecourt of the new Parliament House, in Canberra, titled Possum and Wallaby Dreaming, was unveiled – where he met the Queen.

That same year, he  was included in the major exhibition Dreamings: Art of Aboriginal Australia, which opened in New York and for which his artwork adorned the catalogue cover with his painting Five Stories (1984). It kickstarted his international fame.

Jagamara travelled to America for the exhibition opening, coming home to have his first solo exhibition at Gallery Gabrielle Pizzi in Melbourne, and indeed, painted a BMW M3 Racing Car.

With regard to his painting style, his early work is known for its meticulous rendering, but became more simplified in mid-1990s, and eventually was described as ‘expressionistic’ and more ‘calligraphic’ and free flowing in the 2000s.

Cooeeart observed: ‘… by the mid 1990’s, following the heavy demand for his works during the previous decade, the pressure appeared to have taken its toll on him and his works became more stilted and formulaic.’

He had a long-term significant relationship with his Brisbane dealer Michael Eather, which started in 1996, at time when he also started collaborating with Brisbane’s Campfire Group, and his practice again flourished.

As a result he participated with Paddy Carroll Tjungurrayi in the 2nd Asia Pacific Triennial at the Queensland Art Gallery (1996).

‘Since 2000, the meticulous dot has been replaced with vigorous gestures executed energetically and haptically onto the painted surface of his canvases,’ described Cooeeart.

This shift was acknowledge with his win of the prestigious Tattersall’s Landscape Prize in 2006 for his expressionist painting Big Rain.

But it wasn’t all making. He was elected president of the Papunya Community Council during the 1990s and again between 2002 and 2004. His biography, ‘Michael Jagamara Nelson’ by Vivien Johnson was published in 1997, and in 1993 Jagamara received Order of Australia Medal for services to Aboriginal art and a year later he was granted a Fellowship from the Visual Arts Board of the Australia Council.

In 2009 became the founding artist leader at the new Papunya Tjupi art centre. And in 2012, the Aboriginal Areas Protection Authority of the NT engaged him as a consultant in a five-man curatorium to determine which of the early Papunya boards held by the Museum & Art Gallery of the NT should be available for public display.

Mrs Lewis was a senior artist from Pukatja (Ernabella) on the Anangu Pitjantjatjara Yankunytjatjara (APY) Lands of South Australia, and is of the Pitjantjatjara language group.

Born in the bush between the mission settlement of Areyonga and Tempe Downs cattle station in the Northern Territory, the family moved to Ernabella (SA), where she worked after school at the Ernabella Mission craft room.

‘It was here she developed her skills in batik, and went on to be one of the supervisors for the Kalka women’s centre. It was around the same time, in 1997, that Mrs Lewis was introduced to coiled basketry,’ explained Ernabella Arts.

But Mrs Lewis is known for her creative innovation, and ability to move between move between mediums. She is also an acclaimed punu (wood carving) artist, with a long history of working for Maruku Arts at Uluru-Kata Tjuta National Park, and was also a pioneering weaver and sculptor of native grasses, working with the Tjanpi Desert Weavers, since the corporation’s inception in 1995.

Tjanpi Desert Weavers said on social media this week: ‘It is with a great deal of sadness we advise you all that one of our most senior artists has passed away. Kunmanara Lewis was an artist with a very broad creative artistic practice.’

‘You have left an enduring legacy, Mrs Lewis. We will miss your artistic craft, your insights and wisdom and your profound depth of knowledge, continued Tjanpi Desert Weavers.

Kunmanara’s artwork drew inspiration from the many animals in country, in addition to cameos from community life and early mission days in Pukatja.

These mediums often come together in her small baskets which she will decorate with small figurative carvings, emu feathers, ininti seeds, and embroidered designs.

It was not until 2000, however, that Mrs Lewis made her first life-sized grass figure for the Tjanpi Manguri Weaving exhibition, which saw them win the NATSIAAs with their tjanpi (grass) Toyota sculpture.

Her significant work, Australian Coat of Arms: We were there and we are here, was acquired by Australian Parliament House (February 2019). The artwork was a finalist in the 2018 Telstra National Aboriginal and Torres Strait Islander Art Awards.

Mrs Lewis explained to Parliament House curators: ‘This work represents Tjukurpa (the foundation of Anangu life and society) and Nguraritja (sovereignty and traditional ownership), strength of culture, and the abundance of landscape which has nurtured and sustained us since ancient times. It also reflects on Anangu youth experiencing jail brutality, and demands that we, the original people of this land, be treated with respect.’

This work is a response to the Commonwealth Coat of Arms, historically an emblem signifying the national unity of Australia and serves as a sign of identity and authority.

Lewis returned to Ernabella when her husband died, and had been concentrating on her painting at the art centre since 2009. This has seen her Highly Commended in the painting section of the 2010 NATSIAAS and in 2011 she had her first solo exhibition, at Melbourne’s Alcaston Gallery.