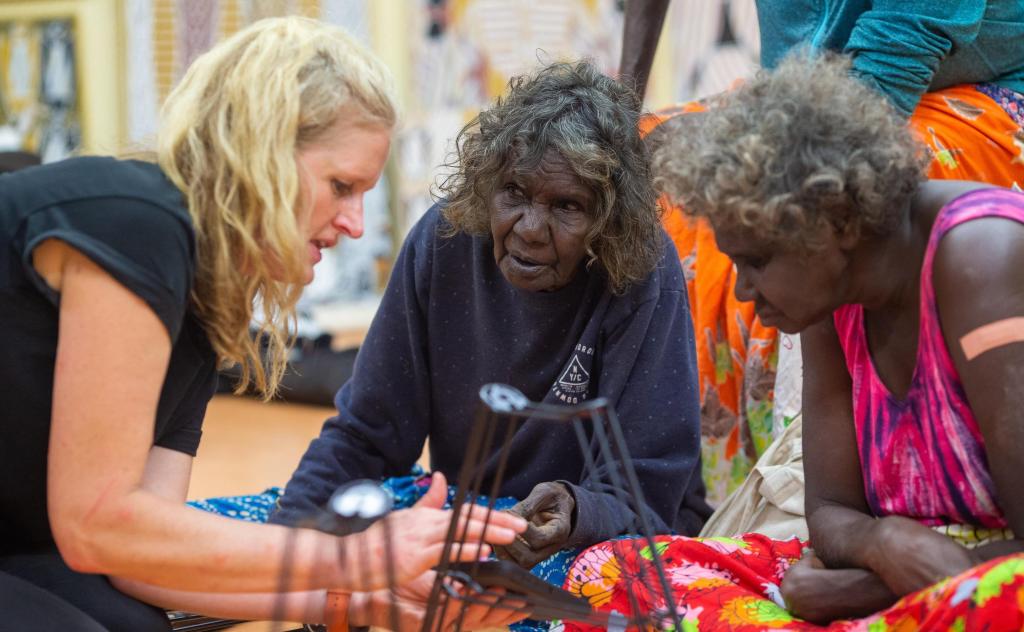 The adage that time reaps results is especially true of a new project that has been a decade in the making.

The exhibition Ngalya/Together tells that story, and will be presented by The South Australian School of Design to coincide with South Australia’s Tarnanthi Festival of Contemporary Indigenous and Torres Strait Islander Art, opening next week.

Ngalya is the word for ‘both’ in the Dharug language from the Sydney region. It has been interpreted by participating artists, who come from a diverse geographic reach: Bula’Bula Arts, Durrmu Arts, Milingimbi Art and Culture, Moa Arts, Ngarrindjeri Weavers, and Tjanpi Desert Weavers.

While language and Country may separate these artists, they are joined by their creative innovation. Each community has drawn upon culturally important objects and traditional design features to work with Koskela’s team of designers to develop new installations and lighting projects.

The project came about through the passion of Sasha Titchkosk, who co-founded leading design brand Koskela with husband Russel Koskela.

Titchkosky said: ‘Koskela believes that great design can be used to effect social change, and has a firm belief that Australia’s unique Indigenous culture is one that needs to be celebrated and acknowledged.’

Today it is a whole team effort at Koskela. Harriet Fesq worked alongside Titchkosky as a curator of the Ngalya/Together. She previously worked at Durrmu Arts in NT as Art Centre Manager for nearly 10 years before joining Koskela.

Titchkosky continued on that sense of track record ingrained in the brand: ‘We are proud of the many collaborations we have worked on in the past 10 years and excited to present our anniversary Collection – Ngalya – highlighting the incredible innovation and contemporary transformations taking place in Indigenous fibre arts and cultures across Australia.’

2019 marks a decade since Koskela first began working with, and learning from, the weavers of Elcho Island Arts on Yuta Badayala (In a New Light).

Koskela explained that Ngalya aims to provide Indigenous weavers with an additional income for their work while maintaining their traditional practices and to introduce new and compelling ‘art products’ into contemporary interiors.

Titchkosky continued: ‘All the products in Ngalya are woven on Country, on the site of each artist’s ancestral land and place of residence, and are hand woven using locally harvested plant fibres and natural, hand-made dyes.’

The lightweight frames, upon which the artists weave, are designed by Koskela.

In 2018 Koskela won a Lotus Award for culture, a business award for company culture and sustainability and was recently longlisted for Dezeen Award. It is also Australia’s first Furniture business to receive B Corp certification, which are only award to businesses that meet the highest standards of verified social and environmental performance, public transparency, and legal accountability to balance profit and purpose.

It is a very different story than the carpet bagging antiques that have plagued a commercial market for Aboriginal artists living remotely. Working closely with the art centres and artists, Koskela is a registered member of the Indigenous Art Code and returns roughly 10% of their profits to communities.