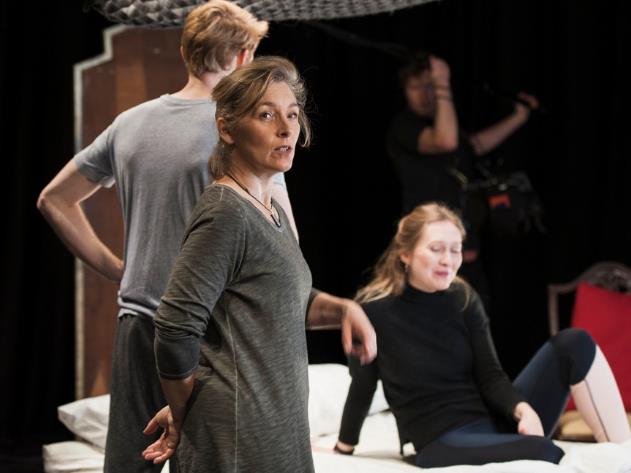 The UK’s leading “intimacy coordinator”, Ita O’Brien, is on a mission to make sex scenes safer for actors.

‘The situation has become a crisis because of this idea that the director or producer is all-powerful, and the actor just has to be a pawn for fear of being considered difficult,’ said O’Brien.

‘Nobody should be expected to be groped or harassed or abused in their workplace, yet situations where the sex scenes weren’t choreographed properly have left actors open to those situations.’

O’Brien trained as a dancer, working in musical theatre in London’s West End, and as an actor, working theatre, including the National, and on TV, before becoming a professional choreographer and movement director. For the past four years, she has been developing best practice and clear guidelines that she hopes will become industry standard, when it comes to nudity, simulated sex and intimacy on screen and stage.

Her mission was sparked in 2009, when she was devising her play April’s Fool. ‘I started looking at what I was asking of the actors, and what methods or techniques I could put in place to create a safe rehearsal process.’

She was shocked to discover there were no industry standards for sex scenes or nudity. In response, she started developing the Intimacy on Set Guidelines to ensure ‘everyone is on the same page’.

‘When a director or producer reads a script and there’s a fight, they get in a fight director, or if there’s dancing they will get a choreographer. When it comes to sex or intimacy, it should be treated in a similar way,’ O’Brien explained.

‘Since Weinstein, the industry is listening to a different way of approaching the work. Producers want to make sure that they’re running a theatre, TV, or film production that works with best practice, and to a code of conduct, and having guidelines for intimacy in place is a big part of that.’

O’Brien’s guidelines recommend banning sex scenes or nudity from the audition process and having a closed set for rehearsals of intimate scenes. Most importantly, the actor and director should have an open and honest dialogue on ‘sculpting’ the sex scenes before rehearsals.

‘So often directors are embarrassed about the sexual content, so they don’t deal with it. The amount of stories I’ve heard where actor tells me “oh, the director just kept missing it out during rehearsals and then finally told us to just improvise it”. And, of course, that is a situation where the actor is left vulnerable.’

O’Brien’s guidelines say the sculpting of a simulated sex scene should involve these standard practices: always have a third party present (keeping the work professional, not private), identify the blocking of the scene, agree on areas of physical touch, sculpt the physical actions using plain words, separately identify the emotional content of the scene, and integrate the physical actions and emotional content.

That last one is key to O’Brien’s method. ‘We approach the physical and the emotional journey of the scene separately,’ she said. ‘Actors agree where they want to be touched and we choreograph and repeat the physical journey so that it’s in their body memory. Then we look at the emotional content for the power play, passion and lust. It’s a release. Actors feel comfortable serving the character journey if they know they’re safe, that everything happening with their scene partner is agreed and consented to.’

When it comes to theatre, where an actor will be required to repeat a sex scene over and over, O’Brien advises having an ‘intimacy call’ before each performance.

This involves checking in with the actors to ask how they think the intimacy and simulated sex scene went during the previous performance, agreeing on areas of physical touch before each performance and allowing for adaptations, then sculpting the physical actions using plain words and for it to be gone through at least twice.

‘During a long run it’s so easy for someone to get sloppy, a hand to slip here or there, to start touching a part of the thigh that wasn’t agreed,’ says O’Brien. ‘An intimacy call will give time and space for the actor to be present, to really make sure that the physicality is exactly as it has been agreed. If you have a fight, you have a fight call before every show. If you have intimate contact, you should have an intimacy call before every show.’

After the Weinstein revelations, O’Brien can’t keep up with the demand for her services on set. However, she’s still regularly met with opposition from the industry.

Often O’Brien has to explain that her work doesn’t interfere with the creative process.

‘I had a colleague who was working on a TV series say “but I wouldn’t want you to come in and take over at that point when I’m getting into the most intimate content”. I said, “well, of course I wouldn’t come in and take over at that point. If I did work with you, it would have been just like if you had a fight director, who would assess the risk and choreograph the fight and then ultimately it’s handed over to the director. It is exactly the same with an intimacy coordinator,” she says.

‘Part of the issue is people saying it’s constraining… but in reality, it’s actually the reverse. Being really clear and present with choreographing and sculpting the scene actually means that the actor has way more freedom and the director has more freedom, because they know that everybody’s happy and then they know that they can really serve the work.’

O’Brien would like to see the Intimacy On Set guidelines adopted as an industry standard worldwide and wants more members of the industry trained as intimacy coordinators.

‘Post Weinstein, actors are being heard. There’s a much greater understanding that emotional [and] psychological injury is a real thing, and there are some very simple things we can be doing to prevent it.’

Ita O’Brien is presenting a series of seminars and workshops around Australia in association with The Equity Foundation. Registrations have now closed but an In Conversation event will be presented in each city. Details here.

This article originally appeared in the Winter 2018 issue of The Equity Magazine and is republished with permission.

Lizzie Franks is the editor of The Equity Magazine and the national communications manager of MEAA Equity.