Jonathan Jones’ Artstate keynote talk offered fresh pathways forward in our complex colonial conversation.
Gina Fairley
[This is archived content and may not display in the originally intended format.] 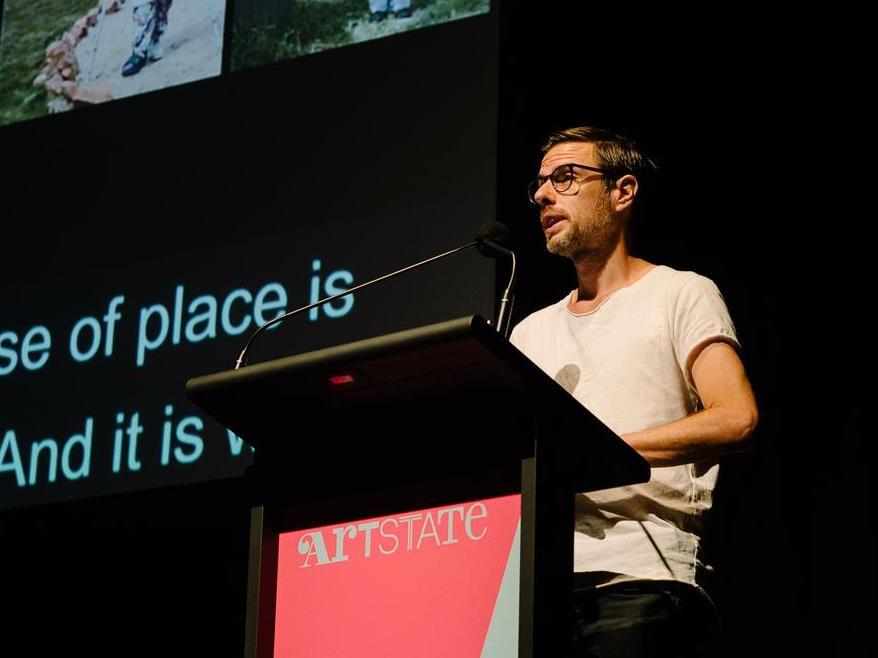 In April 2015, as part of the celebrations for the bicentenary of Bathurst – Australia’s first inland town – Aboriginal elders won the battle for Mount Panorama (better known to most Australians as the home of car racing) to also be known by its Wiradjuri name – Wahluu – after 40 years of campaigning.

Wiradjuri and Kamilaroi artist, Jonathan Jones said that despite that win, ‘the battle is not over’.

During his keynote lecture for Artstate Bathurst – titled Nginha ngurambang marunbunmilgirridyu: I love this county – Jones relayed that local council are currently seeking to construct a go cart track on Wahluu, destroying a number of important cultural sites.

‘It is really difficult to hear local council give acknowledgment to Country. Do they truly mean it? Do they truly understand their ngurambang?’ asked Jones.

Jones went on to discuss a stone cottage built on the slopes of Wahluu – the stones used for the house’s construction were taken from a Bora ring, which for generations had been used for male initiation ceremonies.

In recent years, the cottage has been “protected” by cyclone fencing, not for its cultural value, but to stop ‘car enthusiasts throwing stones at the cars during the annual racing event,’ Jones said.

‘In a strange way our ceremonial stones are locked into that building – they have stayed on Country – but we can’t dismantle the cottage as it is riddled with asbestos. It is a colonial conundrum.

‘How do we move forward with these issues? How are elders meant to make sense of this? I don’t envy the work of our elders. This is just one example of the complex problems they have inherited and have to deal with, and we have to support them through these complex narratives,’ he explained.

Jones delivered an inspiring paper that reminded delegates of the truth in the words, ‘a sense of place’, and of how language, and simply talking to our local Aboriginal elders, can help build better pathways forward.

‘The southeast can inspire everyone; we are a shining example of how colonisation does not win. We can show the world – in a world where refugees dominate the population – that things live inside you; that those stories and culture cannot be knocked out of you – which is an extremely powerful act of affirmation,’ said Jones.

These stories are complex by nature. ‘They are not simple or straight lined as our history books like us to believe. Our history is often too hot to handle; it is often easier to hide in your/our history and try and forget, but this would do all of us a great injustice. We need to relearn our histories and create new futures,’ he continued.

Jones said that there is no longer tolerance for complacency, which only extends the colonial process.

He believes that the experience of colonisation can bind us together in new and significant ways.

Jones started his paper by inviting all to embrace the language, and the concept of ngurambang.

‘”Ngurambang” is used in the same way Aboriginal people use “Country”, not landscape. And if we break the word down, “nguram” is a Wiradjuri word for camp or village and “bang” is a Wiradjuri suffix to amplify a word. So when we put “ngurambang” together it’s the intensification of a camp – a good camp – and is often translated as “home country”.

‘How many of us really know our ngurambang, who know and appreciate our own very special camp?’ Jones prompted.

He spoke of numerous sites of world heritage significance that are commonly overlooked by Australians. ‘These sites are crying out for us to pay attention to them,’ said Jones, adding that Australian archaeology students are too quick to get on the plane to visit overseas sites without considering the significance of regional NSW.

Jones continued: ‘We have the world’s oldest ceremonial burial out at Lake Mungo. Around the same age [40,000 years old], are the Brewarrina fish traps, which are the world’s oldest man made structures – again, only a few hours away and sitting on our doorstep but we are not putting our hands up as having visited.’

He spoke of the site of the world’s first bread-makers – more than doubling the Egyptian record of making bread – and the recently World Heritage-listed eel traps of Budj Bim [or Mount Eccles, an extinct volcano near Macarthur in Victoria] – all in the south-east of Australia and within reach of several capital cities.

‘This culture cringe we have terrifies me, that we have the world’s most significant sites on our little patch here – in our ngurambang – and yet, for the most part, we refuse to even acknowledge them,’ said Jones.

He made the point that he was not trying to place any blame, rather that he wants us to better understand that colonisation has affected us all.

‘It hasn’t just affected Aboriginal people, but it is affecting non Aboriginal people as well – we are blinded to this history, to our heritage. That is how pervasive colonisation is,’ said Jones, adding that our current unilateral view of history was derailing our society and denying our intelligence.

One of the most enlightening case studies Jones presented to conference delegates was that of Parkes, a town about five hours south-west of Sydney.

While some Indigenous academics claimed in the 1980s that there were no Wiradjuri speakers left, for others the period marked the start of a revival of language.

Jones spoke of Uncle Stan Grant travelling to Wiradjuri towns teaching anyone who wanted to learn, and of Parkes’ dedicated leaders Geoff Anderson and Lionel Lovett who took language into the schools in 2006.

‘By 2016 Parkes was teaching Wiradjuri to every school child in every school … 1,000 school kids a year from a community of 10,000 – that is a tenth of their population learning the language of their ngurambang – the Country where they stood,’ said Jones.

While this program suffered due to funding changes within the education system, it remains a stellar example of the massive change this can bring, not only in reduced bullying and increased learning but in social cohesion across the board, said Jones.

‘It is a fantastic story of cultural revival in the face of colonisation,’ he added.

2019 is the year of Indigenous Language. Perhaps we might again see such visionary steps taken?

Culture as a healer

To further demonstrate our capacity to change our situation, Jones used the example of Martial Law, which was declared in 1824 in Bathurst, and was followed by a wave of smallpox decimating community. It is an example of how a community turned to its culture to heal its future.

‘One of the most significant stories that comes from this critical moment, was that elders and community came together at this moment of despair and wrote new songs and performed new dances to try to combat this – they used their creativity to combat this unknown force ripping through the community.’

Jones continued: ‘Extraordinary acts of creativity can also be seen as ways of defying colonisation and oppression.’

While Jones describes his talk as a ‘journey in local history, a bit of an artist talk, and a bit of a crash course in language,’ he said that at the heart of his talk he wanted to touch on ‘Australia’s inability to reconcile with its Aboriginal history and have a true sense of place.’

‘I believe this problem of reconciling with our true sense of place is the country’s biggest failing, and it is what continues to hold us back as a nation,’ he added.

In essence Jones’ message was about respecting culture and Country in our backyards.

He said: ‘The responsibility rests on us – as culture workers, curators artists and educators – to maintain that dialogue and step up.’

‘We should relish the complexity, the depth, the length of history.

‘We should feel a tiny bit smug that we know things people from other countries don’t, things they find strange and exotic and compelling.

‘Let’s bury the stone and steel hatchets and fall in love with our country.

‘Remember there is huge difference between loving your country and simply loving your lifestyle. True love doesn’t rely on beaches, bbqs and sunshine.’

Artstate Bathurst was held over 1-4 November 2018.

Joanathan Jones’ multi-channel video installation, guwiinyguliya yirgabiyi ngay yuwin. gu gulbalangidyal ngunhi (they made a solitude and called it peace) (2015), developed in collaboration with Wiradjuri elders, was on show at Bathurst Regional Art Gallery to coincide with Artstate Bathurst.