Must see performing arts of 2021: Part Two – dance and circus

Our Performing Arts Editor Richard Watts selects more of the shows he’s most excited to see in 2021.
Richard Watts 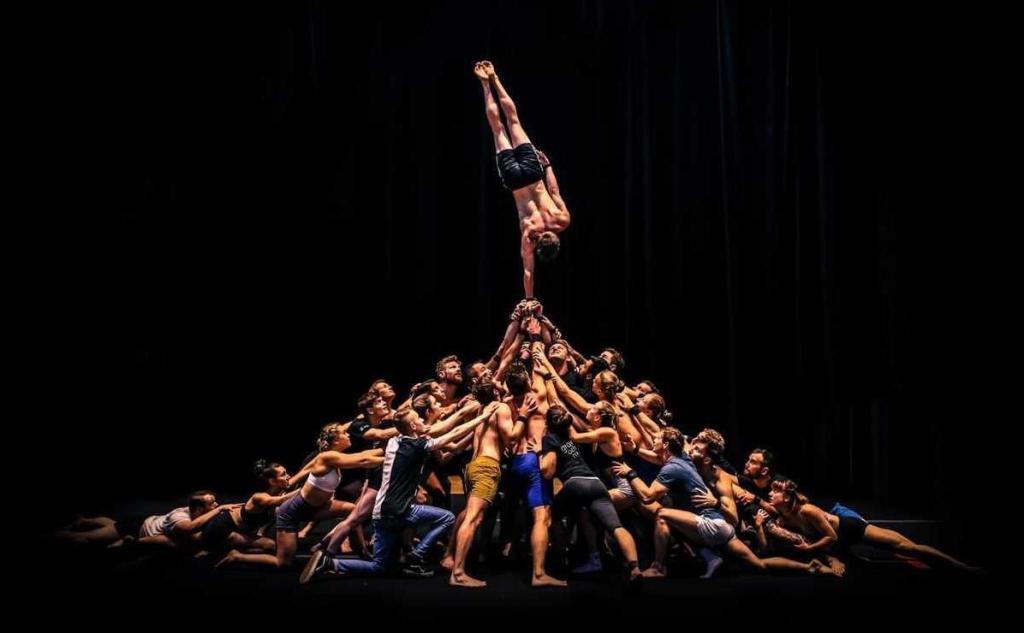 Gravity and Other Myths’ The Pulse premieres at Adelaide Festival in 2021. Photo credit: Carnival Cinema.

Predicting those works which are likely to be the most refined and aesthetically rewarding of 2021 is quite a challenge, given that everything looks good on paper – especially once a talented marketing team has massaged the copy!

An added difficulty is that many companies and individual artists in the dance and circus sectors have yet to announce their programs for 2021. Tasdance, for instance, which celebrates its 40th anniversary this year, is yet to reveal its full program, though one can be sure that some compelling works are doubtless waiting in the wings; the same holds true of Dancenorth, Circus Oz and many other companies across Australia.

Similarly, works in development such as Liesel Zink’s Us and all of this and Emma Fishwick’s Yonder have not locked in performance dates for the year thus far, while the Mullum Circus Festival (to be held over 24-26 September) is still being programmed.

That said, after scouring programs, websites and media releases for days on end, here are some of the many upcoming works that have caught my eye in 2021. Now, if only we could get to them all!

A new dance work devised and directed by Co3 Artistic Director, Raewyn Hill, Archives of Humanity explores humanity and the tension between grace and truth. Presented as part of Perth Festival, the work is described as ‘a living and emotive meditation on human existence. A reflection on where we suddenly and unexpectedly find ourselves today.’ Audiences unable to attend the season at Studio Underground can purchase tickets to a live-streamed broadcast on 9 February and watch the production from the comfort and COVID-safety of their own homes.

Canberra’s annual celebration of older and still practicing dance artists was cancelled in 2020 due to COVID. The festival returns from 3-7 March 2021. Program details have yet to be announced.

A cross-pollination of contemporary circus and street dance, Collision is a collaboration between two Brisbane powerhouses: the critically acclaimed Casus Circus, and Mad Dance House (movers and shakers in the urban and street dance scene internationally). The work was funded through the Brisbane Festival’s Working Title program in 2020 and will have a preview season in the Adelaide Fringe in late February.

Read: Must see performing arts of 2021: Part One – theatre and musical theatre

Young women like Greta Thunberg and Malala Yousafzai are helping to change the world.  How much higher will the heroes of the future be able to climb once there’s no glass ceiling? Premiering at The Cube Wodonga (22-25 September) prior to a national tour in 2022, Girls with Altitude combines the artworks of illustrator Judy Horacek and an original score by Ania Reynolds with the world-class circus skills of an all-girl cast of acrobats from the Flying Fruit Fly Circus. Directed by Anni Davey, Girls with Altitude explores notions of aspiration, achievement and how we imagine success for young people in a rapidly evolving world.

Set in a ten-pin bowling alley, Restless Dance Theatre’s latest work riffs off an experience that’s all too common for people living with disability: the well-intended but smothering ‘help’ that denies people growth and agency. Described as ‘a witty and intelligent new work,’ Guttered reconnects the creative team of 2017’s ‘insightful, touching and compelling’ Intimate Space under the direction of the company’s Artistic Director Michelle Ryan, the recipient of the 2020 Australia Council Dance Award.

Developed in 2020 as a COVID-safe way to maintain engagement with independent dance artists in Darwin, Tracks Dance Company’s Homebodies is a collection of solo works created and filmed within the artists’ homes. With artists literally making a dance in a day in their home, the resulting 12 short films – together with an original soundscape by James Mangohig – will be edited together to reflect the diversity of people, ideas, and movement practices in the Territory. Imbued with a palpable sense of place, Homebodies will be presented in Darwin as an immersive warehouse installation for two nights in July.

Cancelled just days from its world premiere in March 2020, Impermanence is a new, full length work by Sydney Dance Company’s Artistic Director, Rafael Bonachela with a score by The National’s Bryce Dessner. ‘The COVID shutdown inspired me to extend Impermanence to make it a full length work – a response to the uncertainty we all face,’ said Bonachela.

‘Impermanence sees the dancers joined onstage by our dear friends, the exceptional Australian String Quartet, playing Bryce Dessner’s exquisite score live. How poignant that a work originally influenced by the fragility of existence is the first to be staged after the devastation of the pandemic.’

To be staged over 25-27 November, The Maelstrom will be choreographer Garry Stewart’s final work as the Artistic Director of Australian Dance Theatre (ADT), a position he has held since 1999. The culmination of his 22-year tenure, and reflecting the first piece Stewart performed with the company as a dancer (1986’s A Descent Into The Maelstrom) this new work promises to be deeply personal as well as a fascinating showcase of Stewart’s distinctive choreographic style.

Sydney’s annual contemporary dance festival, a celebration of independent dance artists and the diversity of their work and practices, returns for its third year. The program features 31 performances, eight workshops and 20 residencies and incorporates everything from the development of new dance works and workshops to live-streamed online events.

‘The 2021 festival is proud to support the Sydney dance community which has been struggling due to COVID,’ said festival manager Lauren Vassallo. ‘March Dance 2021 is excited to allow audiences to experience live performances again. Many of the artists will no doubt reflect on how the pandemic has affected them.’

Dancer and choreographer Gabriela Green Olea and musician Oscar Poncell are both children of parents who fled Chile’s Pinochet Dictatorship in 1973. Their collaboration, Memoria del Cuerpo Vivo, doesn’t visually represent the revolution Gabriela and Oscar’s parents fought for, but rather tries to wholeheartedly experience it as creative exchange. Memory, family and the way the body hold intergeneration trauma will be explored in a work about our collective resilience and collective exchange.

A dynamic triple bill, New York Dialects will feature a brand new work by choreographer Pam Tanowitz (described as ‘an unusually gifted and original dance-maker’ by the New York Times) alongside two classic works by George Balanchine, ballet’s great game-changer. ‘I have been a fan of Pam’s work for years,’ notes The Australian Ballet’s new Artistic Director, David Hallberg. ‘She is one of our generation’s most intelligent creators: focused, insightful and original, just as Balanchine was. This world premiere, my first commission for The Australian Ballet, is another great addition to the company’s rich commissioned repertoire.’

A collaboration between acclaimed Melbourne choreographer Lucy Guerin and percussive artist Matthias Schack-Arnott, Pendulum will premiere in 2021 (dates TBC). Audience and performers roam amongst a field of moving pendulums, each consisting of a suspended bell. Performers activate the bells; hurling, catching, stopping, spinning, dodging and resisting the swing in their dance with gravity. The power and vulnerability of the human body is revealed through these attempts to control the relentless rise and fall of the pendulum’s weight in this eternally moving frame.

With touring opportunities impossible because of COVID, and JobKeeper payments ensuring the company’s continuation, Gravity and Other Myths’ three core ensembles gathered in Adelaide in 2020 to create an ambitious new work of considerable and unusual scale. Featuring 30 acrobats alongside a 30-strong choir, The Pulse reunites the Helpmann award-winning creative team of the ‘imaginative, expressionistic, thrilling and aesthetically refined’ Out of Chaos… and promises to be exhilarating. Its Adelaide Festival season will now be the work’s world premiere, following the cancellation of its run at Sydney Festival last month.

After the COVID-tastrophe of 2020, which marked Queensland Ballet’s 60th anniversary and saw several works cancelled, the much-anticipated 60th Anniversary Gala will finally be presented in this, the company’s 61st year. The Gala pays tribute to each of the company’s five Artistic Directors to date, from founder Charles Lisner OBE through to Li Cunxin AO, who guides Queensland Ballet today. Excerpts from five productions, including François Klaus’s Cloudland and François Klaus’ The Little Mermaid will be performed, showcasing the company’s journey through dance to date.

Internationally acclaimed circus company Circa pairs with internationally acclaimed animation studio Aardman in a brand new production fusing wit and warmth with exquisite circus skills. This family-friendly show is sure to be popular with all ages, while its blend of animation, film and live acrobatics promises to further Circa’s reputation for artistic innovation. The world premiere season of Shaun the Sheep runs from 2 March at QPAC with additional dates to be announced.

A sequence from Bangarra’s Spirit: a retrospective 2021. Image via Sydney Festival.

Following a successful season at Sydney Festival, Bangarra’s powerful showcase of three decades of dance-making tours regional NSW this month, starting in Griffith on 13 February. Featuring the full Bangarra ensemble of 18 dancers, Spirit draws from a selection of the company’s most celebrated works and invites audiences to connect with stories and songlines drawn from all over Australia.

After its cancellation in 2020, the West Australian Ballet’s STATE – a triple bill of contemporary works – debuts in the Heath Ledger Theatre in June. The program features a new creation from Helpmann Award nominee and highly regarded Javanese-Australian choreographer Melanie Lane, created in collaboration with electronic musician CLARK, as well as GAINSBOURG, created by company dancer and choreographer Adam Alzaim and balancing intricate movement with physical humour. Rounding out the bill is Air and Other Invisible Forces by legendary Australian choreographer Graeme Murphy, a dramatic and powerful work driven by intangibles and journeys into the unknown.

Yung Lung is a new work created by Chunky Move Artistic Director, Antony Hamilton in collaboration with Callum Morton, P.A.M and Chiara Kickdrum. The work centres on a monolithic audio-visual-jukebox-party-podium, the setting for a communion between a youthful gang of dancers and the monolith, in which they worship its hard, abrasive technology. The work mines the collective social anxiety around the ascendance of screen based digital culture and its pervasive presence in contemporary life, as well as reflecting on the distractive lure and cheap glossiness of material desire. Yung Lung will premiere in June 2021.