From independent productions to the touring commercial juggernauts, here are some musical dates for your diary in the months to come.
Richard Watts 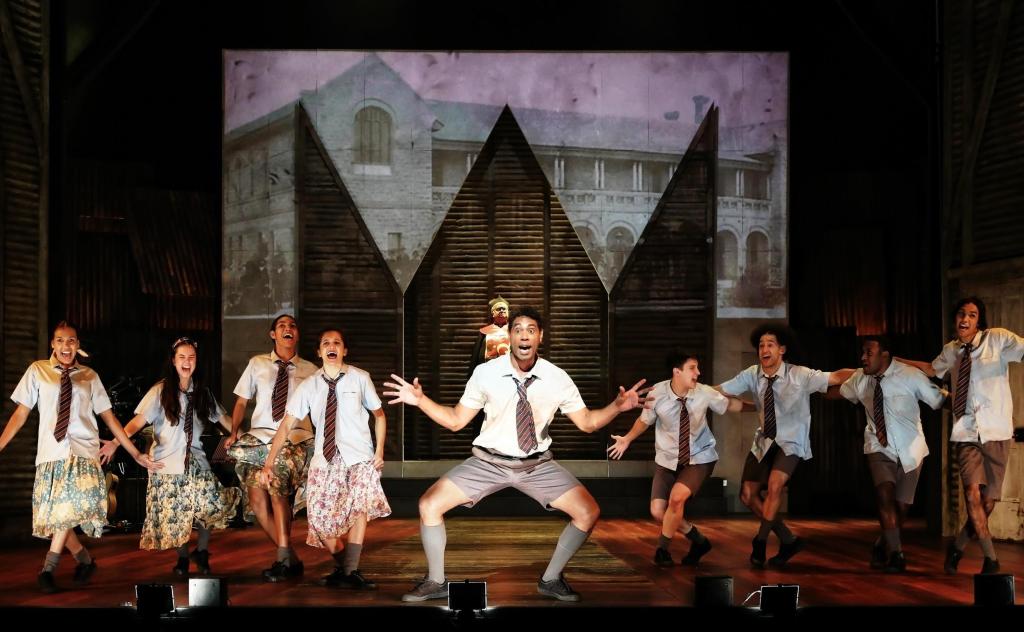 Marcus Corowa as Willie and the ensemble in the Opera Conference production of Bran Nue Dae. Photo credit: Prudence Upton.

From independent offerings to major commercial productions, here’s an overview of the professionally-staged musicals playing across Australia in 2020. Previous calendars covering the year in opera and fine music, and dance and circus, have already been published.

Bran Nue Dae: Now playing in Sydney until 1 February
Jimmy Chi’s coming-of-age musical comedy Bran Nue Dae is an exuberant ride through 1960s Western Australia. The first ever Aboriginal musical celebrates family, forgiveness and reconciliation with a feel-good mash-up of rock-and-roll, gospel, country and blues music. It returns to the stage 30 years after its sparkling 1990 debut. Touring to Perth, Geelong, Melbourne, Brisbane, Canberra and Adelaide after its Sydney Festival season.

The Book of Mormon: Now playing in Brisbane until 15 February
The satirical musical comedy from the creators of South Park. After its Brisbane season concludes, The Book of Mormon transfers to The Civic, Auckland.

Charlie and the Chocolate Factory: Now playing in Melbourne until 2 February
Based on the book by Roald Dahl and featuring songs from the 1971 film, Charlie and the Chocolate Factory transfers to Brisbane’s QPAC from 18 March after the conclusion of its Melbourne season. Our reviewer was a tad underwhelmed by the production, saying: ‘Some bits are half-baked while others are over-egged so the end product is lopsided – some sections delectable, others distasteful.’

Chicago: Now playing in Melbourne until 23 February
A musical theatre institution, Chicago is a tale of fame, fortune and all that jazz created by John Kander, Fred Ebb and legendary choreographer Bob Fosse.

Come From Away: Now playing in Melbourne until 8 March
A hopeful and heart-warming story of community spirit in the face of adversity, Come From Away is ‘one of the most uplifting pieces of theatre you will ever see,’ according to our reviewer.

School of Rock: Now playing in Sydney until 1 March
The story of a failed rock star who turns his A-list students into a mind-blowing rock band when he tries to earn an extra bit of cash by posing as a supply teacher at a prestigious prep school. School of Rock is transferring to Adelaide in March followings its current Sydney season.

Shrek the Musical: Now playing in Sydney until 9 February
Based on the DreamWorks film, Shrek the Musical travels to Melbourne in February and then on to Brisbane in May. Our reviewer notes: ‘At times the production does feel a little ingratiating, as if eager to please everyone with its smorgasbord of jokes, yet it remains a genuinely funny production.’

Six the Musical: Now playing in Sydney until 5 March
‘Divorced, beheaded, died; divorced, beheaded, survived.’ Who needs a mnemonic to remember the fates of Henry VIII’s wives when you have Six, ‘a raucous version of Renaissance Girl Power’? After its Sydney Opera House season, Six transfers to Melbourne in April and Adelaide in June for the Adelaide Cabaret Festival.

The Life of Us: Sydney until 9 February
A modern-day musical that looks at how we love and what it means to be connected, The Life of Us follows a couple trying to sustain their long-distance relationship with technology.

9 To 5 The Musical: Sydney from April
Based on the film of the same name, 9 To 5 The Musical tells the story of three workmates pushed to boiling point by their sexist, egotistical boss. The production transfers to Melbourne’s Her Majesty’s Theatre following its Sydney Lyric season.

Australian Musical Theatre Festival: 21-24 May
Held in Launceston, Tasmania, the Australian Musical Theatre Festival is an unparalleled opportunity for musical theatre lovers, makers and industry professionals to get together, share and celebrate the genre. This year’s festival features special guest Lucy Maunder (Matilda, Beautiful: The Carole King Musical, Charlie and the Chocolate Factory) and a program featuring workshops, masterclasses, a musical debate, the late-night Festival Club and more.

Head Over Heels: Sydney from 3 July – 2 August
A jukebox musical built around the songs of 1980’s band The Go-Go’s, Head Over Heels is a story of usurped kingship, unlikely lovers and gender-fluid disguises that preaches unconditional love regardless of gender or sexual identity,

Fun Home: Melbourne from 15 July – 15 August
Based on Alison Bechdel’s landmark graphic novel, Fun Home is a wholly original musical about seeing your parents through grown-up eyes. The winner of five Tony Awards, this MTC/STC co-production transfers to Sydney’s Roslyn Packer Theatre from 29 August after its premiere Melbourne season.

Come From Away: Sydney from 1 August
Following a successful Melbourne season, where it earned the title of most successful musical ever staged in the Comedy Theatre’s 91-year history, Come From Away transfers to Sydney’s State Theatre from 1 August, with opening night scheduled for Saturday 8 August. Exploring the power of hope and community in the face of adversity, Come From Away tells the true story of the 7,000 passengers grounded after US airspace was closed after 9/11, and the small Newfoundland town whose residents welcomed them with open arms.

The Secret Garden: Sydney from 2 August
Based on the novel by Frances Hodgson Burnett, The Secret Garden returns to Australia for the first time in 25 years. After its season at the Sydney Lyric Theatre, the production transfers to her Majesty’s Theatre, Melbourne from November.

The Sovereign Wife: Sydney from 7 August – 5 September
Based on the satirical 2013 play from Sisters Grimm (‘a three hour extravaganza which deconstructs every historical, racist, sexist, hetero-normative, homophobic, cultural cliché about Australia ever depicted on screen or stage,’ according to our reviewer) The Sovereign Wife is a new Australian musical featuring music and lyrics by Casey Bennetto (Keating!) and book by Sisters Grimm (Declan Greene and Ash Flanders). Expect all the subtlety of Baz Luhrmann’s Australia smashed together with the soaring beauty of Gina Rhinehart’s poetry.

The Who’s Tommy: Melbourne from 14-21 August
The iconic 1969 rock opera album Tommy returns to the stage in a new production from Victorian Opera.

Fiddler on the Roof: Sydney from 3 September – 31 October
Performed in Yiddish with English subtitles, this new Australian production of Fiddler on the Roof transfers to Melbourne’s Comedy Theatre from 15 November – 20 December.

Into The Woods: Melbourne from 16-26 September
Melbourne’s Sondheim repertory company, Watch This, are staging Stephen Sondheim and James Lapine’s most famous and frequently revived work, Into the Woods at the Meat Market in September.

Bonnie & Clyde: Sydney from 18 September – 18 October
The Tony-nominated Bonnie & Clyde tells the story of Bonnie Parker and Clyde Barrow, who went from small-town nobodies to American folk heroes during the Great Depression.

Sweeney Todd: Adelaide from 3-10 October
A bloody tale of revenge and pies, Sweeney Todd: The Demon Barber of Fleet Street is one of Stephen Sondheim’s best known works. A new production from State Opera South Australia.

Preludes: 13 Nov – 5 Dec
A musical fantasia set in the mind of Russian composer Sergei Rachmaninoff,Preludes is a head-tripping journey into an artist’s psyche.

Oklahoma! 28 November – 20 December
Directed by Richard Carroll (Calamity Jane, Once), this fresh take on the classic musical Oklahoma! will be staged in the round on the stage of the Heath Ledger Theatre at the State Theatre Centre WA.

What did we miss? Email editor@artshub.com.au with updates.