Why creative people are more prone to depression (from the archives)

From burnout to bullying, we are not good at managing our mental health as a sector.
Deborah Stone 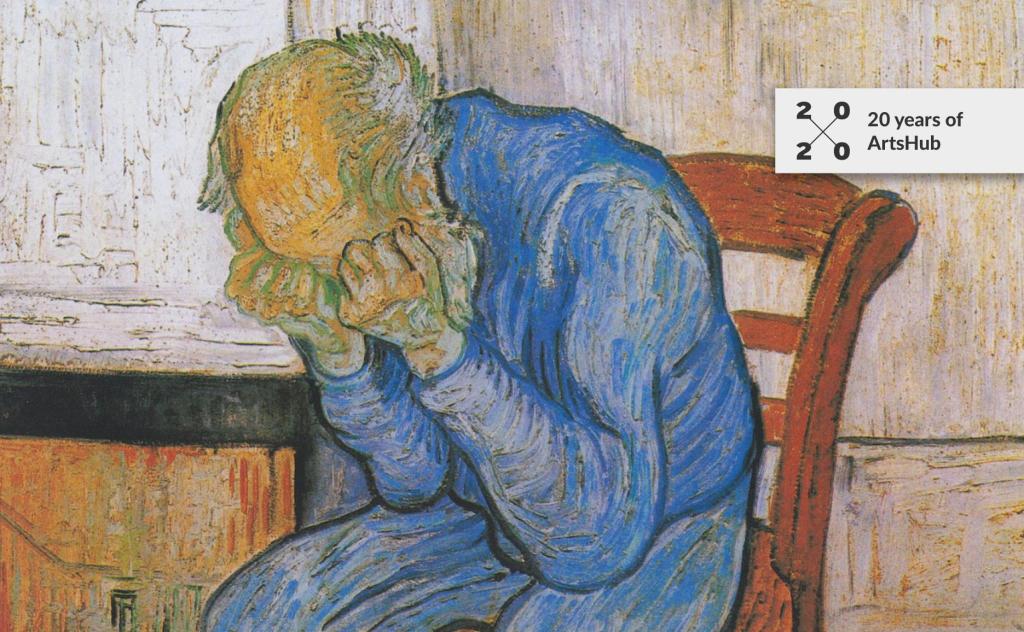 Vincent Van Gogh, Sorrowing Old Man (‘At Eternity’s Gate’) (detail) was completed in early May 1890, when he was convalescing from a severe relapse in his mental health, and just prior to his suspected suicide.

The painter Vincent van Gogh famously cut off his own ear in a period of anguished depression. The writer Virginia Woolf walked into a river with her pockets full of stones declaring she could not live with ‘going mad again’. The composer Robert Schumann died in an insane asylum following multiple suicide attempts. The magnificent works these and many other troubled artists bequeathed to us were obtained at a terrible price.

Since Plato, it has been argued that ‘madness’ is twinned with creative genius, that the agonies we now understand as depression and the turbulence we now recognise as mania are part of a Faustian bargain with inspiration.

One per cent of the general population is bipolar but seven studies over the past 30 years have found rates of bipolar between 5% and 40% in populations of artists and writers reaching as high as 70% when cyclothymia, a milder syndrome of cycles of elation and gloom, is included.

In the case of unipolar or major depression, the population rate is about 5% but the rate among artists and writers in the various studies between 15% and 50%.

Both these conditions are strongly associated with suicide and, most disturbingly, artists are 18 times more likely to suicide than the general population.

I think 100 per cent of creative people are going to experience existential depression, which is a result of their desire to find meaning in life through their work.

Why is depression so prevalent among artists? How does a genetic flaw turn into a creative bonus? And how does an artist access the benefits of that creativity without suffering the potentially fatal harm of a major mood disorder or even the lesser but still painful bouts of minor depression?

Professor Kay Redfield Jamison, who wrote the landmark Scientific American article, is an international authority on the subject, both as a psychiatrist and as a person with bipolar.

She observes that manic-depressives in their high or manic state think faster and associate more freely. When manic, people need less sleep, have unusual energy, remarkable focus and an inflated self-belief, all of which may allow the production of original work.

Depression may simply be the flip side of the creative manic state, the price artists pay for their bouts of productive work.  But Jamison suggests the bipolar personality may also help artists in a more general sense.

‘The manic-depressive temperament is, in a biological sense, an alert, sensitive system that reacts strongly and swiftly. It responds to the world with a wide range of emotional, perceptual, intellectual, behavioural and energy changes,’ she writes.

Terence Ketter, professor of psychiatry and behavioural science at Stanford University, has studied creativity in both bipolar and depression sufferers. He identifies personality factors and cognitive styles common to bipolar and creatives: changeable feelings, high intuition, curiosity and open-mindedness which.  Similarly, sensitivity and rumination are common to both artists and depressives.

‘The arts are more dangerous [than other occupations] because they require sensitivity to a large extent,’ he told a symposium on depression and creativity. ‘If you go too far you can pay a price – you can be too sensitive to live in this world.’

Artists also experience minor depression at a rate greater than the general population. In fact Eric Maisel, author of The Van Gogh Blues: The Creative Person’s Path Through Depression believes depression in artists is inevitable.

‘I think 100 per cent of creative people are going to experience existential depression, which is a result of their desire to find meaning in life through their work. The dirty little secret is that if you spend three years writing a novel you may end up with a successful novel and at that split second you may feel like you’ve done something meaningful but for those thousand days virtually 700 or 800 of those days you are just slogging along… most of the time you are not experiencing life as successful or meaningful,’ he said in a television interview.

She says the destructive effect of depression on the brain, the progressive nature of bipolar and the very real risk of suicide argues against refusing treatment.  ‘Clearly no one is creative when severely depressive, psychotic or in four-point restraints…Artists and writers tend to focus on the risks of treatment and not on the risks of no treatment.’

Read: How creatives can stop drinking themselves to death – Richard Watts (2017)

A number of artists have been outspoken about their own experience of depression in an effort to help others.  Rock musician Mark Gable, front man for The Choirboys, is an ambassador for the anti-depression charity Beyond Blue.

He has experienced two severe bouts of depression, the second so bad he was suicidal. The first bout prompted a period of excessive creativity. ‘I did an enormous amount of song writing, it was the only thing that could placate me. As soon as I stopped I would feel worse again. But with the second bout I avoided all creativity.’

Overall he thinks the depression has had a negative effect on his work but he acknowledges an upside in the single-mindedness the condition creates. ‘Whenever I’m writing a song I go into a mild depression, I find myself become bohemian –unwashed, not caring about my social environment, become reclusive.’

Now helping his son to establish a career as a musician, Gable is sharply aware of the double-edged sword of a creative life. ‘As much as I would love them to be successful I would also love my son to be happy and I don’t think those things go hand in hand.’

Read: How to survive – physically and mentally – on an artist’s income – Madeleine Dore (2016)

Gable chose not to take medication during his first bout of depression but in the second the pain was so great he felt he had no choice. ‘When I’m on medication I probably do have less desire to create but I don’t know if that’s because of the medication. In any case I don’t feel I need to become more creative again I feel happier and that’s more important.

Former politician turned playwright Neil Cole believes his ‘bipolar mind’ is essential to his creativity. ‘The genetic fault that leads to bipolar is something that’s with you all the time and there are certain aspects that are there in your normal state – even when you are not high or depressed: associative thinking, a flight of ideas, interest in words, a reflective way of thinking.’

For crisis and suicide prevention support, contact Lifeline‘s 24 hour crisis line on 13 11 14.  For more information and help with depression contact your doctor or Beyond Blue.