With International Day of People with Disability this week, we take a look back through our archive at how well the arts have managed this conversation, and what still needs to change.
Gina Fairley 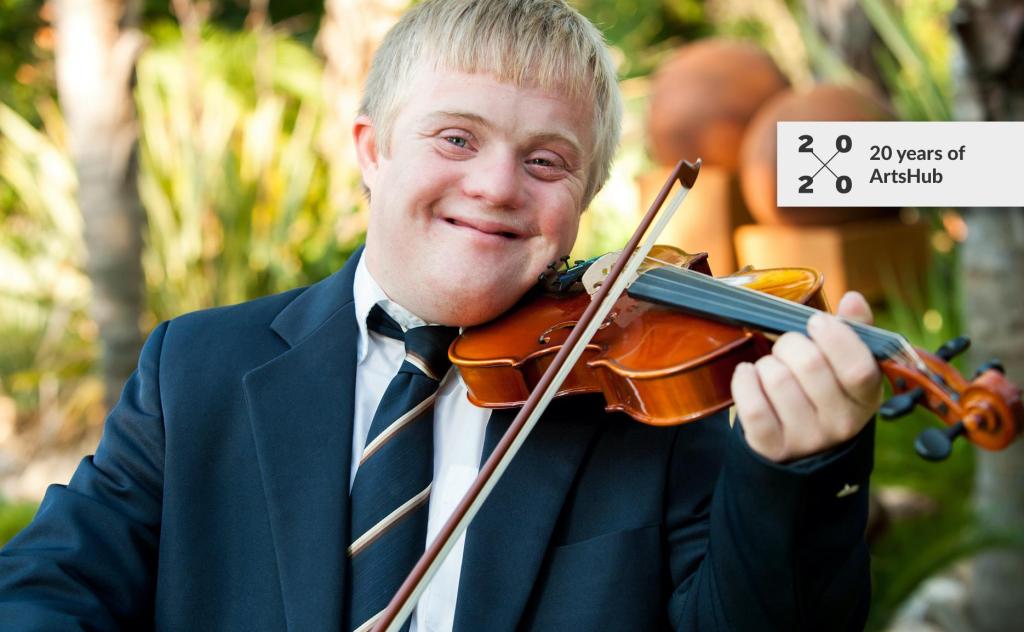 First published in 2019, and in response to a SAMAG panel discussion by sector leaders, the consensus of the day was that the greatest hurdle remains with recognising the shift needed from disability access and awareness, to disability-led and employment.

As the next in our 20×20 series, which looks back at the cultural milestones and trending topics that have shaped the arts, we shine a light on the conversations and policy making around disability arts and access to coincide with this International Day for People with Disability (3 December).

ArtsHub is celebrating its 20th anniversary in 2020.

Under the charge of the rallying slogan ‘the last avant garde’, disability arts has pushed through the silent ceiling in recent years, with great strides in sector with Disability Inclusion Planning (DIP), research and initiatives such as the Create NSW Createability Internship.

But more still needs to be done according to the numbers.

The strongest threads emerging from that discussion were the role that employment plays in normalising disability, and the reminder that being visible is a significant tool in shifting the debate forward.

In this follow-up story, we look at the win of disability-led engagement, to coincide with the release of a report that has been disability-led and chaired by Kath Duncan, Disability and the Performing Arts in Australia: Beyond the Social Model

Launched 4 June, it is Australia’s latest report on disability access, and has been funded by the Australia Research Council, with Arts Access Victoria and the Universities of Melbourne and Sydney.

Duncan said: ‘In positioning Australian arts and disability performance as ‘the last avant-garde’ this project is at the forefront of a new wave of disability-led and disability-pride arts practice that places innovative aesthetics at the heart of debates about the role of people with disabilities in the cultural life of the nation.’

Acceptance is being seen; and being seen is affirmation

When people see themselves presented on stage or screen, it is affirmation. And yet, the imbalance remains.

Bailey noted that Screen Australia’s 2016 report, Seeing Ourselves, revealed that just 4% of characters portrayed in all TV drama productions between 2011-2015 identified with disability, but not all were played by a person with disability.

Jack Dowdell, a filmmaker and screenwriter said that inclusivity, as a practicing creative, was all about employment.

He continued: ‘For me it is able-bodied people getting used to seeing people with disability … They know you gotta be nice to people with disability, but they don’t know specifics of how to react, and the best learning tool I think people have is the media – watching movies and TV shows – it’s the way you get most eyes on something.’

‘Our battle is to be seen as normal; for disability to be seen as part of the human condition,’ reminded Kate Hood, an artist, actor, writer, theatre maker and founder of Raspberry Ripple Productions.

‘I think we need to become a movement – a disability-led movement needs to exist in Australia,’ she added.

Hood cited the example of Weave founding member Caroline Bowditch, who talks about being a trip hazard.

‘Her solution was to position herself in a downstairs office of a major arts organisation in the UK because they had to walk past her every day – a person in a wheelchair who was dancer and a choreographer – and it just became a normal part of everybody’s existence,’ explained Hood.

There was a consensus among the panel that by seeing themselves on stage, on screen and staffed in organisations, that leads to pathways for other artists with disability – a kind of permission that ‘you can do that too’.

Danielle Gullotta, Access Programs Producer at the Art Gallery of NSW (AGNSW), said the gallery gave entrants to the Archibald, Wynne and Sulman Prizes the opportunity to identify with having a disability this year.

‘Why ask them? It is again about statistics, and if we can report on those statistics it might encourage others.’

They are small wins but important ones. All panelists agreed the numbers do help, but the numbers aren’t going to exclusively change the problem.

Gullotta believes that for an arts organisation to have a Disability Inclusion Plan in play is as much about a transformation in the corporate culture from the inside out, as it is scheduling tailored programs.

‘That targeted initiative is a very powerful tool,’ said Gullotta. She added that bringing intern Naomi Malone into the gallery as part of Create NSW’s Createability program brought about some culture change, that started from HR and moved outwards in a ripple effect.

‘She is a PhD student; she has two degrees – she totally knows her skills – and our staff were totally involved in learning the slight adjustments,’ said Gullotta.

Gullotta makes the point these are paid internships, ‘which meant that they were being rewarded for honest work they did … these kinds of targeted adjustments in mainstream organisations are essential.’

Read: Autism and the arts: making a space for different minds – Katie Sutherland (2017)

For 20 years AGNSW has delivered an Auslan program, but five years ago the numbers were dropping. ‘We invited presenters from the deaf community – artist, writers, actors – to present those tours. We found instantly we were attracting more people from that community, but also students learning Auslan,’ said Gullotta.

The gallery has also worked with artists from the disability community through mentorships since 2016 inviting them to lead activities as part of main program.

‘It hasn’t happened over night – but that idea of being “bottom up top down” – to get everyone from the executive staff right down to our volunteer guides trained in disability access awareness, is essential,’ Gullotta added.

While both Gullotta and Hood agreed that nothing is perfect, they recognised the current strides forward are positive.

‘We are in a space at the moment where there is a lot of blank space. People have a real reluctance to engage, to accept that maybe they don’t have the expertise to deal with persons with disability,’ said Hood.

‘We need to be seen as people who can provide that expertise in the arts. That is a really important shift of focus that hasn’t happened yet,’ she concluded.

The research that has been collated to date on disability arts and access can be found at the Australia Council for the Arts comprehensive Research Summary (published 2018).

SAMAG is a not-for-profit organisation that holds monthly seminars on trending topics in the arts.