20×20: Get em young and reap the long-term outcomes

Research has shown that over 60% of recent arts visitors first attended cultural organisations as children. We revisit this topic as part of ArtsHub's 20th anniversary celebrations.
Gina Fairley 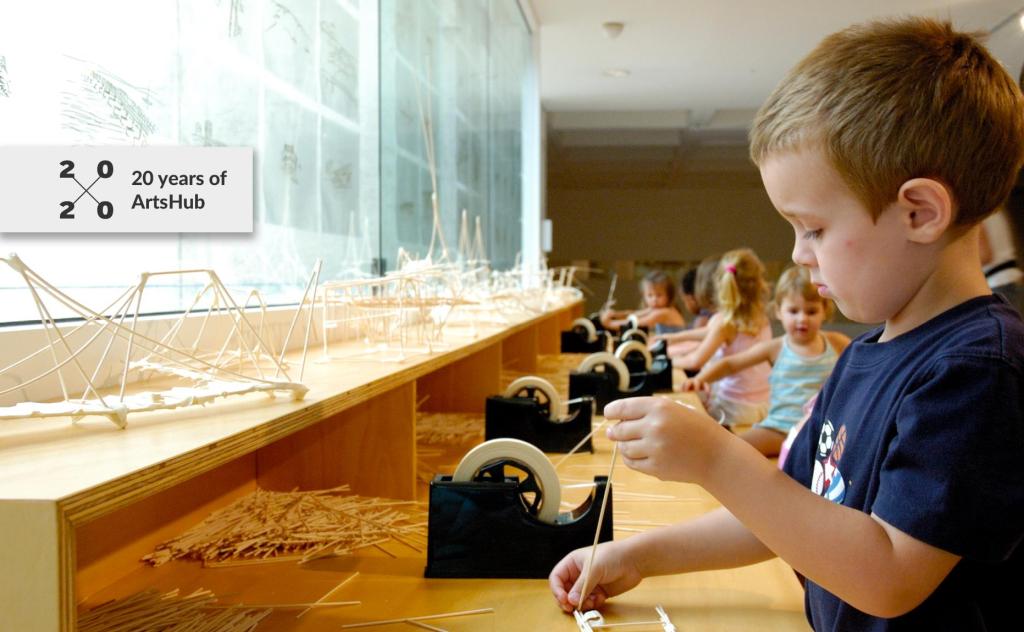 First published in 2017, this article looks at ways different organisations are engaging the next generation of arts participants. ArtsHub is celebrating its 20th anniversary in 2020, so we’ve delved into the archive to consider some of the trending topics of the past two decades and ask where we sit now in comparison.

It would seem a no brainer – if you were encouraged to appreciate cultural events when you were a child then that habit would naturally continue as an adult. While most of us have believed this to be fact, now there is statistical data that proves it true. The silver lining in that research, however, is what cultural institutions can do with that knowledge to ensure their future sustainability.

Victoria’s Minister for Creative Industries, Martin Foley MP, welcomed Museums Victoria’s 3000th ‘Museum Generation Baby’ back in August 2017 – a term we would not even have recognised a decade or two ago.

The occasion was a celebration of the power of early exposure to creative experiences in the wake of the opening of the Pauline Gandel Children’s Gallery at Museums Victoria last December (2016). The gallery has enjoyed visits from 431,370 children and carers over the eight short months since it opened.

The Children’s Gallery’s popularity is testament to a highly successful membership program – Museum Generation – that is building the next generation of museum-goers. Foley noted that all babies born, adopted or fostered this year are provided with six months’ free family membership of Museums Victoria as part of the initiative.

‘This initiative is designed to increase participation among young families… [to] spark their curiosity with the creative, interactive, learning experiences on offer,’ said Foley.

It is a concept that Queensland Art Gallery in Brisbane has been getting right since 2006 when it expanded to its adjacent Gallery of Modern Art and customised Children’s Art Centre (CAC). A trailblazer in Australia for its commitment to children’s programming, around 20% of gallery attendance is clocking in as family visits.

Similarly, the MCA in Sydney radically redressed its Children’s Programming with the construction of its new wing in 2012 and development of its National Centre for Creative Learning (NCCL), which occupies 40% of the new building.

The National Gallery of Victoria (NGV) has had success with its Children’s Festival and pop up children’s gallery, which debuted with an interactive space designed by Romance is Born (October 2015). The National Gallery of Australia have also integrated their Family Activity Room into programming with increasing demand from visitors for such services.

These are significant figures, and echo recent data reviewed by Colleen Dilenschneider. She has trawled through the National Awareness, Attitudes and Usage Study (NAAU) in the USA, and reports that on average, those who visited a cultural organisation as a child are 1.73 times more likely to have also visited a similar organisation within the last two years than someone who did not or doesn’t recall visiting as a child.

Furthermore, over 60% of recent visitors to cultural organisations attended these organisations as children. Turns out, visiting as a child may be a strong indicator of future visitation, and we should be thinking more strategically how such audiences are captured and converted.

It is not just a change in programming; it is a change in museum culture that we are talking about here.

In an earlier interview with ArtsHub, Donna McColm, Head of Public Programs, Children’s Art Centre and Membership at QAGOMA, said: ‘One thing we always come back to is, we don’t see children and family audiences as separate … We really see that the children’s aesthetic experience is no different, so we are not ghettoising these audience but rather opening them up.’

She added: ‘We are finding anecdotally and through surveys that often a family will visit because a child has come in a school group to the CAC and they go home and say they want to go back. Adults are introduced to us through the child, which is the opposite of what it used to be, your parents dragging you along to the gallery.’

Read: How to make a creative space for young people – Brooke Boland (2016)

The Pauline Gandel Children’s Gallery with its colourful designs and interactive attractions, has also been recognised by the experts as being at the top of the field. Last month it received the Museums Australia (Victoria) Award for Large Museums. The Gallery also won the 2017 Museums & Galleries National Award for a permanent gallery and was shortlisted for the Australian Interior Design Public Design Award.

While not all galleries and museums have a dedicated children’s centre, it is almost de rigueur that activities for children of all ages are offered within their smorgasbord of public programs. Simply, they can’t afford not to.

What can we learn from the numbers?

Dilenschneider‘s take on the NAAU study came up with the outstanding figure that over 60% of recent visitors to cultural organisations attended these like cultural venues as children. Not recognising the power of that impact is an opportunity lost. Dilenschneider says there are three critical points to keep in mind about why this information is important, and worth much more thought than a “well duh” reaction.

The data strongly suggest the importance of engaging children under the age of 13. The data also suggests a solvency-related opportunity to engage children under the age of 13. That is, these youngsters may help carry our organisations into the future by maturing into regular visitors, members, and donors. This long-term support moves beyond mere foot traffic, and that is the golden chip of knowledge behind nurturing young audiences as future givers.

2. This is not about childhood visitation. It is about creating memories that begin in childhood

It’s not simply welcoming youngsters in the door that matters, but actively engaging them and creating a memorable experience. Remember: creating relevance isn’t all about content interest. Dilenschneider says that at our best, cultural organisations are facilitators of shared experiences.

In order to gain the benefit of adult visitation stemming from childhood engagement, children need to be engaged so that those experience are relevant to their future, and yours.

3. Engaging children is not a magic bullet for visitation

This data and bravado of kids programming comes with a warning. Being perceived as a place primarily for children and young families can also be a barrier to adult engagement. Nearly 25% of potential visitors to cultural organisations are millennials between the ages of 25-34. Do you want to loose them?

There’s no point in cultivating future adult visitors if you’re not perceived as an entity that adults want to visit. In other words, don’t blindly prioritise children over all other audiences. It is not an “or”, it is an “and”. Other age-related audiences are equally critical for long-term solvency, and we have been seeing this increasing with dementia and aged programs and special needs programming.

More Reading on this topic: