A poetic and hilarious two-hander that challenges reductive ideas of femininity and religion.
Ainsley Kerr
[This is archived content and may not display in the originally intended format.] 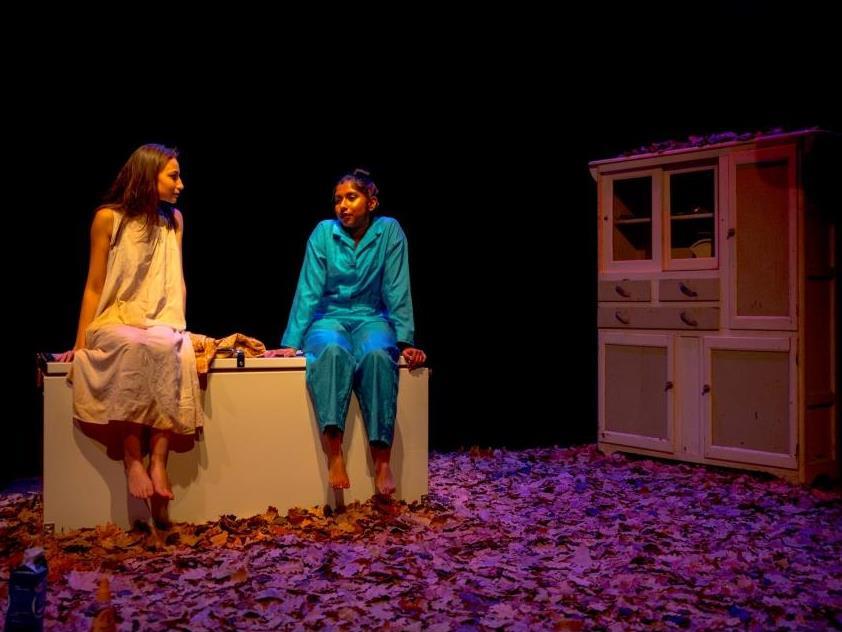 Emina Ashman and Nisha Joseph in Make Me a Houri. Photo: Benjamin Laut.

Two woman sit together in limbo, awaiting their final destination after death. In the hopes of being reunited with her earthly lover, one woman seeks to purify her body and be transformed into a Houri, one of the 72 virgins offered to martyrs of Islam in the afterlife. The acts of purification range from attempts to deny her own biology – never urinating, defecating or menstruating – to acts not so far removed from contemporary beauty treatments, such as skin whitening, hair removal, and herbal douches.

The model of the Houri serves as a launching pad for the women to discuss anecdotes of their own spiritual, religious and sensual pasts, creating a nuanced picture of female sexuality which is sometimes as odds with itself – neither fully repressed or fully realised under the lens of religious and patriarchal moral policing. One of the women hilariously declares that she once  dressed as a ‘Halal Snack Pack’ for Halloween, shamefully acknowledging the desire to be objectified and transgressing religious taboos but not necessarily at ease with the results.

Technically the show does a lot with very little, managing to feel lush and layered while remaining very minimal. The ingenious use of domestic set pieces – a fridge on its side, a sideboard lit from within, a few cooking utensils used for beauty treatments – makes the space seem familiar and yet not, banal but also otherworldly. The lighting design heightens this juxtaposition with domestic fixtures and bold colours: the domestic is made alien. This show would have been better suited to the old La Mama Theatre surrounded by bricks and stairs rather than full black drapes, which in such a small space are distracting and ugly. The blocking is delicate and natural, allowing a refreshing amount of stillness but not feeling static – in fact the very small space at times feels expansive.

However, it is in the words themselves that Make Me a Houri really soars. Emina Ashman’s script is remarkable: poetic, astute, insightful, subtle, humorous, teasing out of language itself the contradictions and false dichotomies of inherited cultures. Nisha Joseph’s performance is hilarious and both women make space for playfulness with some pretty heavy themes. It’s this playfulness which is perhaps the actual conclusion of the performance: there aren’t any simple paths to paradise for young women of colour but making male virginal whore fanstasies the object of derision is surely a good start. It is so refreshing to see female desire discussed like this – complicated, conflicted, nuanced and sensual. A real delight.