One of music’s great blessings to humanity is its capacity to still the unquiet mind.
David Barmby
[This is archived content and may not display in the originally intended format.] 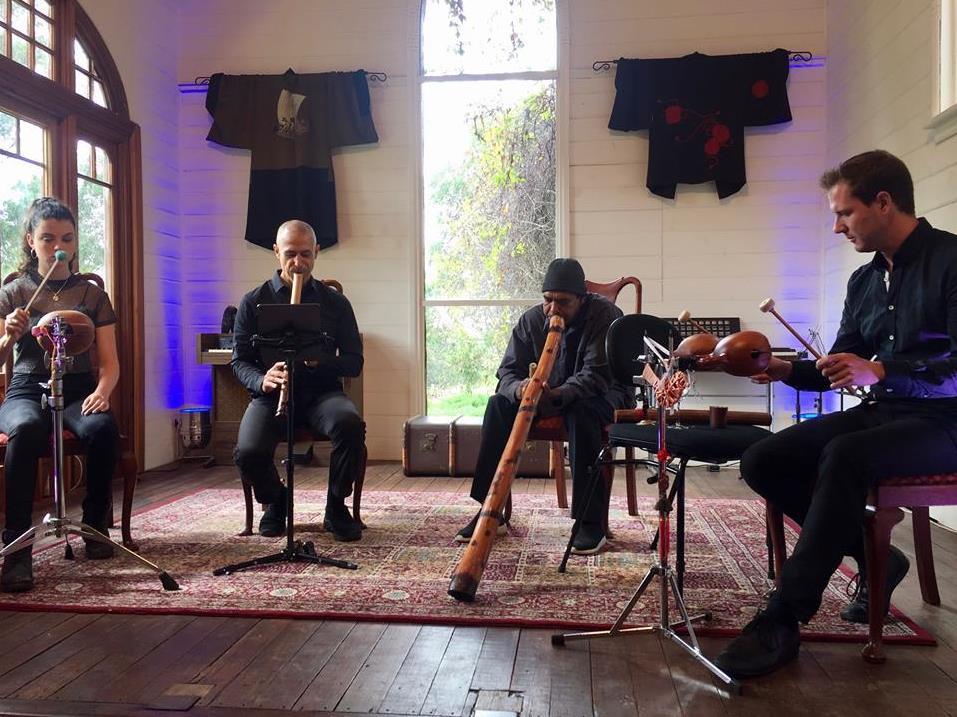 Day two of this year’s Four Winds Festival began with a morning recital in Tanja (population 157), 30 kilometres south along the beautiful sapphire coast from Bermagui in a decommissioned white wooden church currently being privately developed as an arts centre.

Morning sunshine and a chorus of bellbirds surrounding us, the concert commenced with gentle music by Ross Edwards, his Tyalgum Mantras composed in 1999 and featuring Riley Lee (shakuhachi), Warren Foster (didgeridoo), Mark Robinson and Ruby Newell (percussion). This still and spacious score comprises repeated material for each instrument played in free time, the shakuhachi indicating to the others the work’s approaching conclusion. There was Feldman-like specificity in the sparse score explained by the composer in his annotation, ‘I think one of music’s great blessings to humanity is its capacity to still the unquiet mind, suspend the linear passage of time and promote the intuitive “night” mode of consciousness which invites present-centred contemplation’. It was a rejuvenating way to start the day listening to this fragile, renewing music in a peaceful rural setting. For unknown reasons, glasses were used in place of the score’s specified crotales.

Then followed a satisfyingly mature reading of Brahms’s first String Quartet in C minor, Op 51. Along with his first Symphony Brahms seemed reluctant to compose his initial string quartet for fear of failure resulting in a composition that is sometime reticent to express itself and at others seemingly overwritten in complexity. The work received a finessed and dramatic performance by the Australian String Quartet where words almost stumbled over each other in its first Allegro movement in an urgency for them to be expressed. In his intimate timber space, it felt as if we were within a single booming musical instrument affording an enthusiastic response from the audience at the stern and sombre C minor conclusion of the final Allegro.

At the day’s conclusion was a recital by Viennese pianist Stefan Vladar. Here the audience was offered traditional fare with Haydn’s Andante con Variazioni in F minor, Beethoven’s Appassionata Sonata, also in F minor and one of Schubert’s final works in the form of his profound Sonata in B flat major, D 960. It was a full to overbrimming house in the Windsong Pavilion, with its timber-lined interior affording its excellent acoustic as Vlador commenced Haydn’s carefully shaping variations, revealing an innate sense of expressivity along with an attractive voicing. Filigree details and transparent textures were appealingly manifest throughout.

In startling contrast, Vlador’s conception for the Beethoven Sonata was one of muscular theatricality and blustering fury. A bumpy ride through the opening Allegro assai resulted in turbulent eruptions and sharp dynamic contrasts. The Andante con moto was subtly expressed with more tempered weight. In the final Allegro ma non troppo, however, the soloist appeared to gleefully ignore the ‘ma non troppo’ in an overly fast, white-knuckled approach to the movement that eventually revealed technical mishaps. Schubert’s exquisite Sonata, D960 is an intense work deeply expressing conclusion-of-life sentiments over its long journey. There were many attractive aspects to this performance such as the shadowed yearning of the heart-beat motif in the Andante Sostenuto but I wondered if the soloist had been psychologically exhausted from his frenetic Beethoven leaving us somewhat uninvolved in this final great work.