A tight production which still has time for silences and stillness.
Judith Greenaway
[This is archived content and may not display in the originally intended format.] 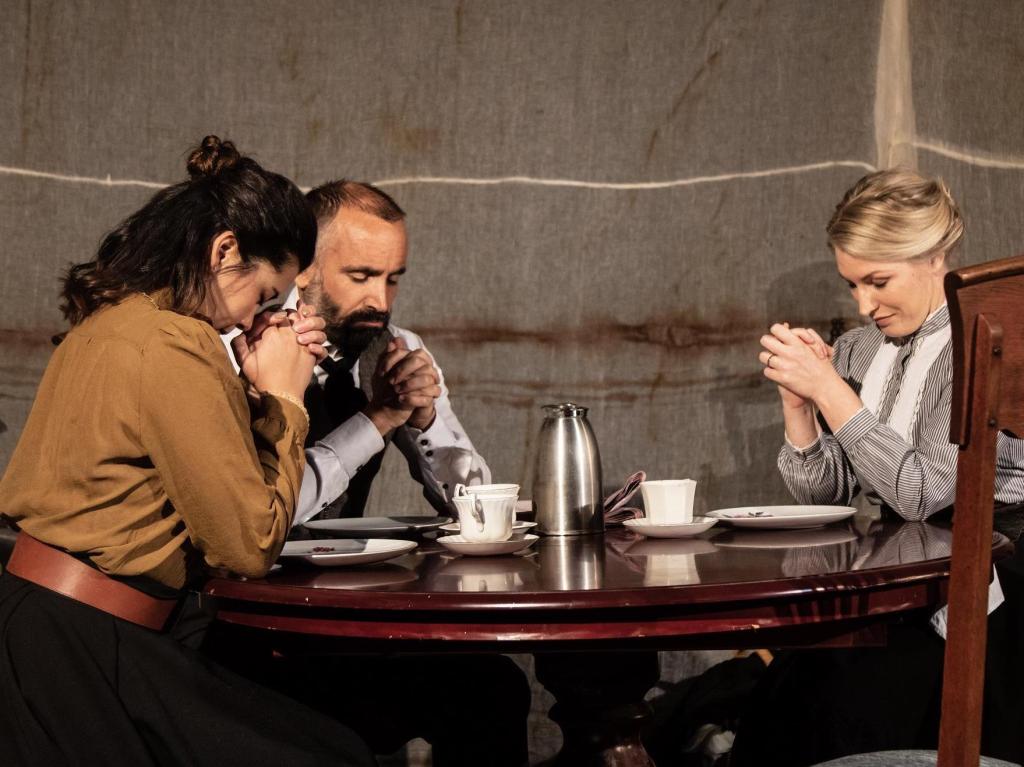 Clock and Spiel Productions has done a clever thing with Metamorphosis, Franz Kafka’s novella adapted for the theatre by David Farr and Gisli Örn Gardarsson, playing at Chippen Street Theatre. The production is made comfortable in its surroundings. Utilising the black wideness and hidden dark depth of the stage, the absurdist action is isolated in an endowed domesticity. With a period precision of set and costume, the production overcomes any comparisons to previous athletic and visually spectacular interpretations while still expressing enough disorientation to successfully leave the esque in the Kafka.

It is a well created early 20th century space which is allied with the time frame of the original novel; bedroom on the left, ostensibly upstairs, and dining room on the right. The diaphanous backdrop delineates the two rooms with lines and wallpaper dots in mud-wasp brown on dirty white. In the bedroom Gregor awakes late to find himself transposed. Though the original work is vague on how, it is always assumed there is something insectival about the change and here, a clever headpiece is used to give the requisite impression. The family of Father, Mother and sister, Grete, will respond, respectively, to the new son and brother with horror, incomprehension and compassion. After which comes a comic twisting of fear and fading of familial responsibility.

As Grigor, Sam Glissan takes a knees bent, praying mantis lower armed approach to the physicality and his alone in the room work is especially moving. Glissan creates an empathy for the creature as the obvious drive and intelligence and calm rationality gradually leave him. Yannick Lawry holds back his Father who travels little in his response to the new incarnation of his son but does become a better father to Grete, by necessity. Mother is played with excellent comic timing by Hailey McQueen, and Madeleine Miller shows a terrific understanding of compassion fatigue. Her manufactured coquettishness is a lovely interpretation. Julian Lawrence as Fisher, the new and required other, is arrogant and manipulative with enough effete to make the word picture sequence and the language usage very enjoyable to watch. 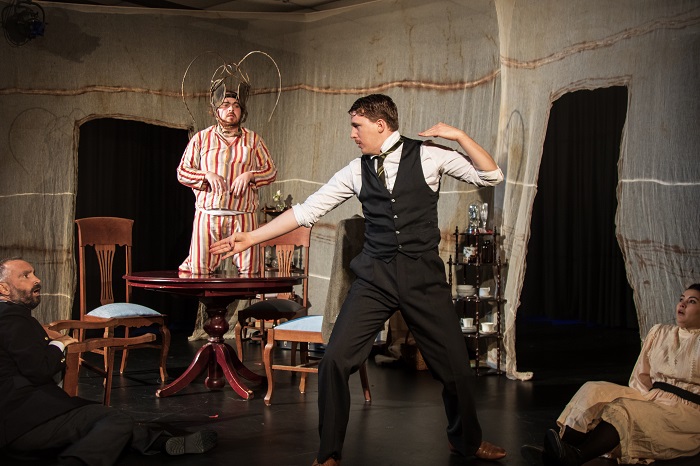 Director Amanda Stephens Lee respects the absurdity of the piece through personal contact. The vacuity of these freeloaders is set early and the relationships between the ‘normal’ are simplicity itself but their responses to the ‘previously loved’ is complex in its ambiguity. Also astute is Stephens Lee’s development of class, the bourgeois subtext within the redolent modern themes. The comedy is placed sparingly and lands very well and there are some very interesting groupings and lines in the staging. Grete’s leanback when Grigor is on the chair looking out has very astute theatrical decision- making behind it.

The audio effects are well sourced but the music is extremely good. The effectiveness of warmly intermingled lower and upper strings is very emotive and reinforces the domestic and the period elements with the use of a jaunty violin and a slightly more modern cacophonous sting to change and enhance mood as salient instruments. The lighting defines the action and makes skilful use of well blended states in white light.

Metamorphosis keeps the audience involved through the use of space and it is a tight production which still has time for silences and stillness. Those are the moments when the modern implications and portents really hit home with a chilling Kafkaesque prescience.