Caroline Jay Ranger directs and choreographs her cast to create a classically funny farce.
Amelia Swan
[This is archived content and may not display in the originally intended format.] 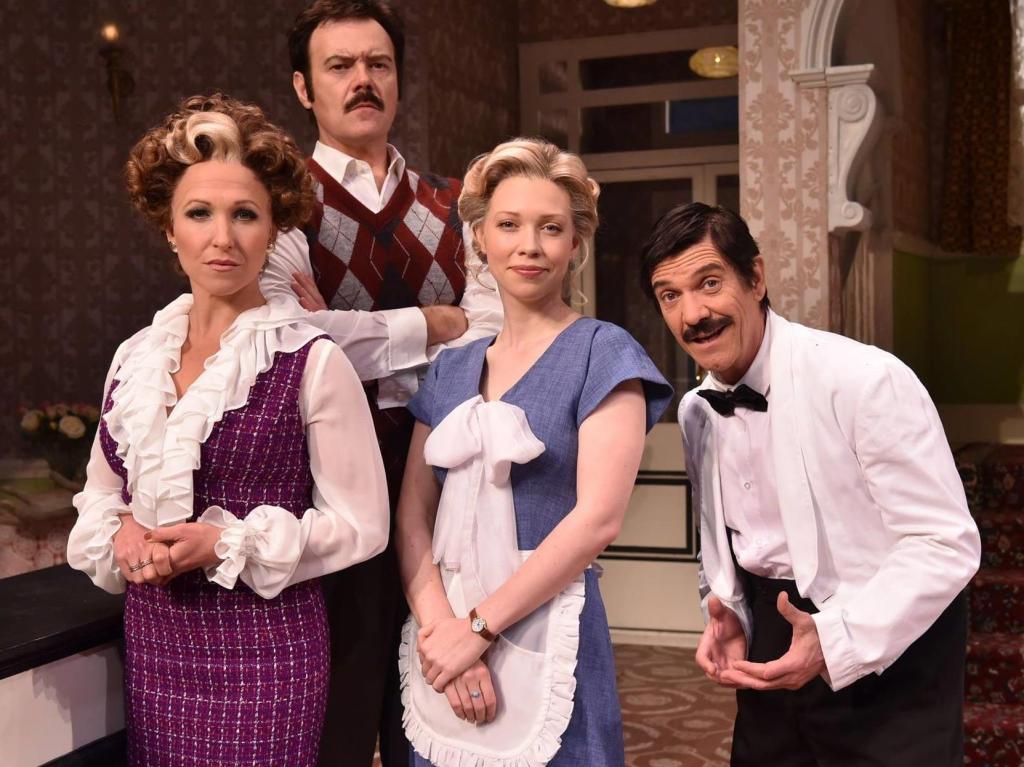 The Comedy Theatre last night was filled with a light-hearted expectancy at the Melbourne opening performance of John Cleese’s reworking of his and Connie Boothe’s cult TV comedy. It was met with great satisfaction from the crowd, who laughed from beginning (literally as each characters very entrance was greeted with applause) to the uproarious end.

Cleese describes in the program that his process of turning three of his favourite episodes, The Salesman, The Rat and The Germans, into a theatre play, last January as one of ease. It is immediately a delight to see how well suited the pithy one-liners, physical gags and well-drawn characters of the original TV sitcom are to adaptation to the stage in the seamless farce that is the product of his endeavours. Caroline Jay Ranger directs and choreographs her cast to create a classically funny farce which harks back to the stage larking days of Oscar Wilde and Noel Coward, in its dependably excellent script and whipping comic timing.

Set over two days in the life of the Torquay hotel, the audience is immediately swept back into the frumpy neo-Victorian foyer of the hotel by a wonderful old fashioned stage set, by Liz Ashcroft, faithfully copied from the TV show with no detail missing. Like a huge dolls house interior, the moose head, the wall paper, an upstairs bedroom and the swinging double doors of the dining room create an illusion that one is transported back to 1975.

Actor Stephen Hall, as Basil, and Blazey Best, as Sybil, present with such charge and joyful gusto that the show cannot but be felt as one of homage to the dearly loved originals of the show. Aimee Horne is so very similar to Connie Booth as Polly that one has to rub one’s eyes to remember it is not Booth herself.

Deborah Kennedy as the deaf Mrs Richards brings a seemingly effortlessly confident theatrical presence that lifts the farce into a level which surpasses what has gone before it. Kennedy brings the live audience into the show and breaks the third wall that is liable to rise up with a TV show reworking. Suddenly the audience was awake and laughing heartily in her hands and remained engaged until the end.

The original scripts written by Boothe and Cleese in 1975 and 1979 took months of reworking and revising at the time of being written. These past efforts are not lost as forty years later some of the funniest lines still ring out with glory.

A guest pleads with Basil: “I did ask the waiter”, and is answered with “Well, he is hopeless, you may as well ask the cat”. Mrs Richards complains about her view from her window, Basil asks “Well,what did you expect to see from a Torquay Hotel Window, the Sydney Opera House, the hanging gardens of Babylon?”. Cybil (the “great sabre toothed tart”, as Basil calls her) questions Basil: “You look happy, Basil”. “Ah Happy”, he muses, “Ah yes, I remember that”. Basil’s unrelenting sarcasm, dysfunctional marriage and exasperation at the disappointing nature of his lot makes him a character that will perhaps never cease to arouse a perverse affection for him in his audience.

People who enjoyed the original Fawlty Towers will love this show, people who didn’t may not be suddenly convinced of its comic genius. The performance brought hearty laughter from an audience mainly over forty and yet there were younger people enjoying it in addition. The cast can relax with surety that they have a show that is strong in all aspects of its craft; and like Deborah Kennedy revealed, the more the live theatrical element of the show is acknowledged, for they have a live audience eager to be played with, the more funny it will become.