Size might not matter when you’re invested in an international conservation movement, but collaboration certainly does.
Brooke Boland 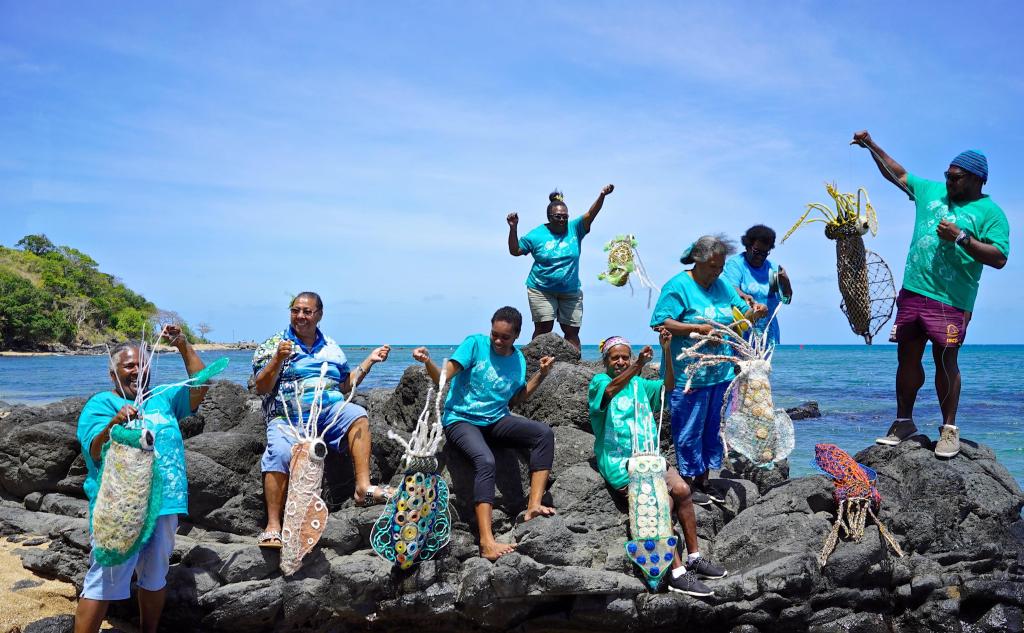 Artists and collaborators from Erub Arts, an arts centre located on Erub (Darnley Island), the most north-eastern of the Torres Strait Islands and home to approximately 400 Erubam le (Erub people), have returned after the timely and successful Caught in the Net exhibition at JGM Gallery in London.

The exhibition features work developed as a collaboration of Erub Arts with Lynnette Griffiths and Marion Gaemers, Australian artists who are at the forefront of the global ghost net artistic movement. Ghost nets are abandoned fishing nets that are drifting in our oceans and fishing indiscriminately causing devastation to our marine life. Biodiversity, environmental preservation and proximity bring together these Indigenous and non-indigenous artists at Erub Arts, and through their artworks and their vision of the world, the exhibition raises awareness of the dangers of pollution affecting our oceans, and the opportunities for regeneration that recycling presents.

Caught in the Net featured works created from net and rope collected from the surrounding ocean as part of this movement. Collaborator and Erub Arts Artistic Director Lynnette Griffiths said: ‘This is really people working together being part of a worldwide movement and worldwide awareness. Erub is a small island and we’re reaching out globally to work with people and organisations.’

‘It is also an opportunity for galleries and big institutions to elevate collaboration and not just tick a box. It is [collaboration] on a different level.’

Other successful collaborative shows from Erub Arts have been in Monaco, Singapore, Switzerland and Germany, which has allowed the art centre to build new international contacts, conservation audiences and markets. And in 2019 Erub Arts is continuing to work with the Ghost Net movement for a new exhibition at QAGOMA titled Erub Arts, Marion Gaemers & Lynnette Griffiths, Below the Tide Line, on from December 8 to May 2020.

As part of Erub Arts’ earlier 2017 Singapore exhibition supported by the National Museum of Australia, the art centre piloted an education program that adopted a ‘teach the teacher’ model across eight schools in Singapore, the Torres Strait and a group at the National Museum in Canberra. It resulted in the creation of over 800 small turtles made by school children and individually named, which were installed outside the Erub Arts exhibition at the Ancient Civilisations Museum

‘It was a huge investment, but an amazing outcome…It became not just an art project, but a science project, and a language and culture project,’ said Griffiths.

‘On a small island, you rely on lots of different people, and that has always meant working in collaboration. So developing an arts centre out of the school, which is how Erub Arts came about, you’re looking at collaboration all the time. It’s young and old, mentoring, Indigenous and non-Indigenous, it’s all of those things. Collaboration is quite central to practice,’ said Griffiths.

‘Especially with Ghost Net to be able to reach that huge international market and to be able to put that message out there very clearly, Erub has positioned itself quite strongly with collaboration as the ethos,’ she added.

Erub Artists are continuing to work collaboratively in a cross-cultural context to share sculptural stories in ghost net which is abandoned and reclaimed fishing net and rope. Check out their next show Erub Arts, Marion Gaemers & Lynnette Griffiths, Below the Tide Line at QAGOMA Dec 8, 2019 – May 2020.