Putting people at the centre of desert festival

Parrtjima – A Festival in Light continues to evolve while enthralling visitors with holistic cultural experiences on Country.
Celina Lei 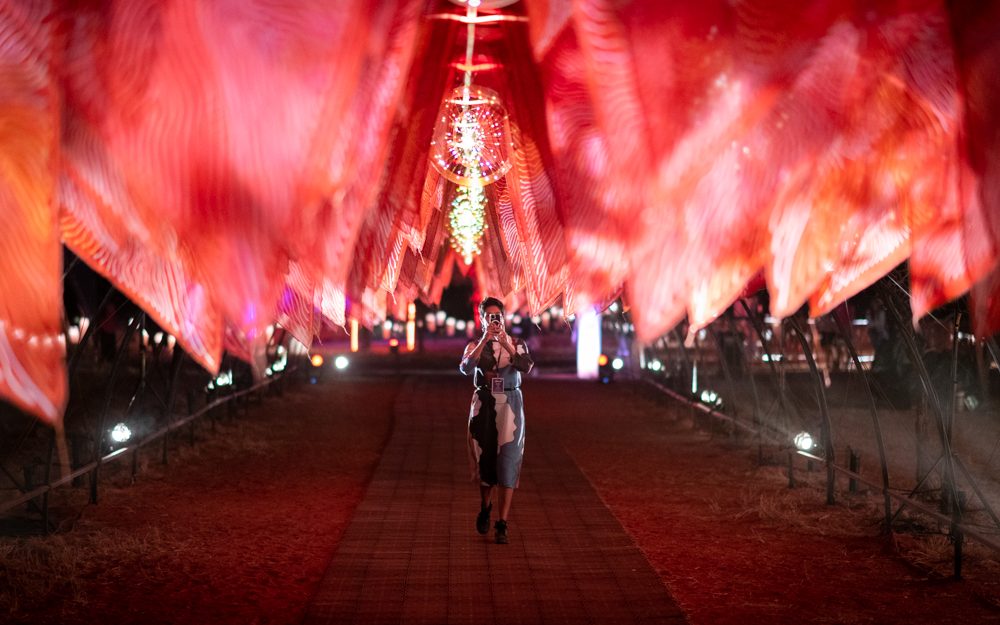 Established in 2016, Parrtjima – A Festival in Light has evolved into a high-profile cultural event with an established program that keeps developing and changing in focus, in line with current topics.

Parrtjima Curator Rhoda Roberts told ArtsHub: ‘It often takes quite a while to get festivals off the ground so people know what they are. Parrtjima is at a point where [when the event happens], there’s no accommodation left in Alice Springs.’

But Parrtjima is not only an incredible showcase for visitors. It is also a platform for the local community’s artists, performers and more.

‘[Parrtjima] gets us working with what we regard as our masters, our Picassos, our van Goghs,’ said Roberts. ‘The event highlights Western Central Desert art and the art movement (which Europeans call dot paintings), and [the art] is an ongoing adaptation and continuous form of expression.’

The enthusiasm towards this year’s event has been absolutely phenomenal, Roberts added. ‘There’s a real awakening where Australians really do want to know more about First Nations peoples and what their art and culture is.’

At the heart of Parrtjima are the large-scale light installations, this year revolving around the theme Sky Country. This includes an amazing light show projected onto the ancient MacDonnell Ranges, turning them into a spectacle of light, colour and song.

A platform for artists that sets the desert alight

The light installations are developed from artworks by artists from the breadth of Arrernte country, as well as from across the South Australian and Queensland borders, and the APY Lands. Through the Parrtjima Festival Reference Group, local Traditional Owners help assess the suitability of the artworks for the MacDonnell Ranges region.

‘The MacDonnell Ranges are a very significant place for the local people. Of course there are many stories from different estates and countries, or homelands, but we can only tell certain elements of that story,’ explained Roberts.

‘Together with the senior estate custodians as part of our reference group, we look at ways that we can showcase the importance of those ranges and what they mean, but also give a very bespoke experience to people coming to Alice Springs who would never get that experience – and it wouldn’t exist – anywhere else in the world.’

Roberts added: ‘For these artists, creating something that’s connected to those ranges, that’s their monument, their memorial… That’s the exciting thing about it, because you can immerse in our story and do it authentically with the cultural authorship that it requires.’

Establishing itself as a signature cultural festival in not just the Northern Territory, but Australia, Parrtjima is more than a one-off event. It plays a significant role in fostering deep connections with local artists and generates opportunities for the surrounding arts centres.

Roberts explained: ‘With installations, we’re always considering what the outcome is. There are artists that have been painting for years [in the region], but they just haven’t had the profile – a lot of people don’t get to travel to remote art centres – so this is a wonderful opportunity to present those new works that are still very much based on the old footprints of those stories.’

‘Bindi [Mwerre Anthurre Artists studio], based in Alice Springs, is a great arts centre where all their members have some form of disability … One year we did a whole series of massive three and four metre lanterns that held their artwork, which resulted in them making a smaller homeware version of those lanterns that have now become a cottage industry for them.’

Elevated programming for a holistic experience

Roberts said that while the light installations sit at centre stage of Parrtjima, the festival’s breadth of culturally engaged programming is not to be missed: ‘That’s the exciting thing about Parrtjima – it’s more than a light festival. With Aboriginal art, of course it has to be holistic.

‘You might see a painting telling a story of Country, but with that painting there is also the song and the dance. So, by having a program that brings together music, dance, talks, films and workshops, it gives a more holistic and deeper understanding,’ she added.

Brimming with energy, this year’s programming includes interactive screen-printing workshops by social enterprise House of Darwin, pottery demonstrations by Hermannsburg Potters, as well as sand drawings narrating sky stories and the history of the boomerang.

The music program features a national line-up including Barkaa, King Stingray, DJ Karnage and the Eastern Reggae Band. Another highlight is Parrtjima’s film program, this year shining a light on some of the milestone works of Warwick Thornton, who grew up in Alice Springs and comes from a dynasty of influential Indigenous media workers.

With this year’s theme of Sky Country, Roberts said future iterations will continue to not only deliver visual delights, but explore ideas that are relevant to the most pressing environmental issues of our times.

‘What we hope is, over the coming years, that people will all be looking at the environment,’ said Roberts. ‘If we learn from our knowledge keepers, who have managed to continue their stewardship across Country in Australia for thousands and thousands of years, it will allow us to reconsider how we’re living and perhaps we might have a chance at changing the temperature of this planet.’

That’s the social and cultural responsibility Parrtjima has imbued itself with – a program which engages, educates, and enlightens with every coming year.