What artist Kelly Doley has learnt about feminism is complex, compelling and sometimes self-contradictory.
Raphael Morris
[This is archived content and may not display in the originally intended format.] 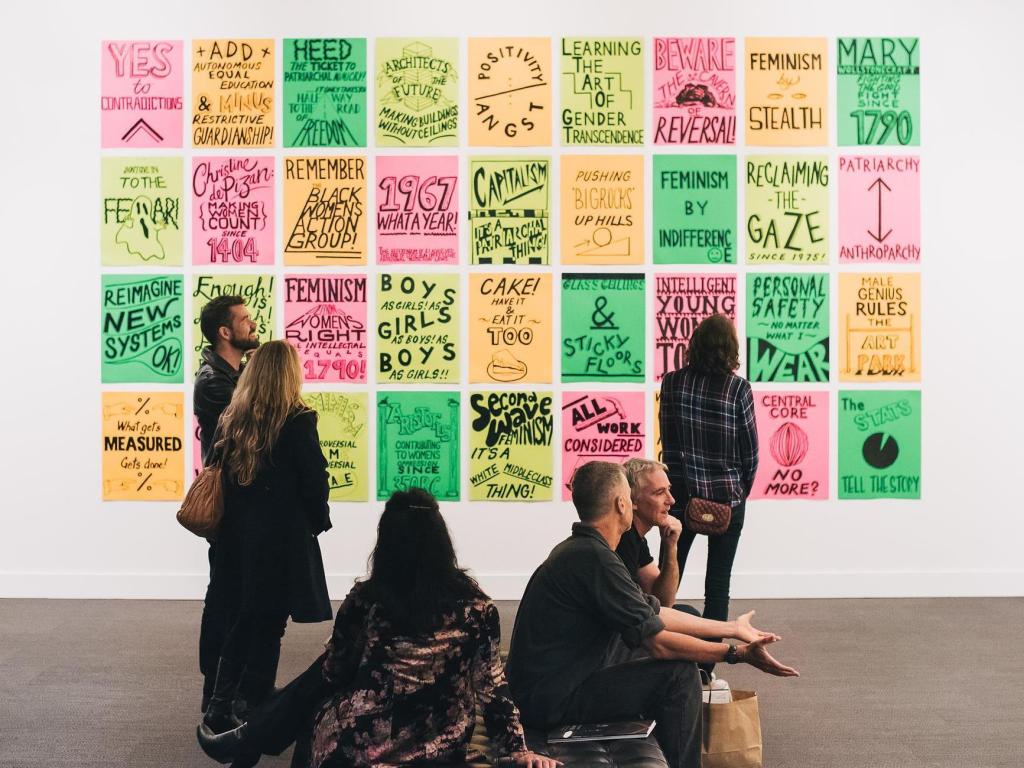 Social movements are not monoliths. They are multifaceted, fragmented, and often inconsistent. Two people who call themselves feminist may have almost entirely different conceptions of what the term means, and the priorities of one may exclude the priorities of another. Feminism is a complex, intersectional phenomenon that cuts across lines of race, sexuality, and ability – among other factors – in such a way that one might posit there is no one feminism, but rather many ‘feminisms’.

Art has the power to make audiences rethink their ideas of what is included and excluded by the term ‘feminism’, a dynamic that is dramatically on offer at the nation’s only public collection of art by Australian women, the Cruthers Collection of Women’s Art (CCWA) at the Lawrence Wilson Art Gallery, University of Western Australia.

Art operates in a dynamic sense, constantly disrupting boundaries and rendering contradiction constructive. By continuously playing with the differences and oppositions, art conveys a rich, non-reductionist image of society.

Sydney-based artist Kelly Doley puts this philosophy into action in her latest work, a new acquisition at CCWA. Things Learnt About Feminism displays 95 hand-painted posters, each carrying a comment drawn in black ink on fluorescent card. The various slogans, rallying-calls, and provocations come from Doley’s 2012 project The Learning Centre: Two Feminists, which involved conversations and lessons on feminism from 16 different people across a range of backgrounds. Those lessons, which are documented online extend beyond the lived experiences of the 16 participants, and draw on a myriad of texts given to Doley, from the 15th Century Book of the City of Ladies to teen magazines like Sassy and Rookie.

Collection curator Gemma Weston, describes Doley’s work as a fantastic illustration of the scale and scope of feminism’s concerns. ‘Underlying the deceptively simple texts and images on each individual poster are different histories, ideologies, aims, wins and losses. Multiply that by 95, and you get a sense of the breadth, depth, and the complex entanglements that are involved in living feminism as practice.’

That’s not to say that Weston believes that Doley’s work is comprehensive. ‘The posters don’t attempt to be definitive,’ she said. ‘In highlighting the subjectivities and specialisations of research, Doley implies the multiplicity of needs gathered under the banner of ‘feminism’, which can in its best form accommodate for difference’.

Weston believes that the key strength of Things Learnt About Feminism is its contradictory nature. ‘I think contradiction is both inherent and integral to the practice of intersectionality,’ says Weston. ‘If each of us is taking into account the intersections of class, gender, and race that shape our perceptions of the world, you end up with a kind of Venn diagram with seven billion of so circles that may or may not intersect… there will be points in that system where the needs and desires of individuals are likely to be conflicting or ambivalent and contradictory, but intersectionality at least offers a model in which these points of conflict can be acknowledged and negotiated.’

While the collection of posters involves several contradictory messages, together they describe a complex reality. ‘They add up to something approaching critical mass… visually, they work together as a coherent whole, building up a network of relationships. In that system of relationships, the open-endedness and mass gives you an idea of how to transcend the absurdity and ambivalence of contradiction.’

Weston said CCWA is a feminist project but she was quick to add that that doesn’t necessarily mean that the work it holds is feminist work, or that work made by women is automatically feminist. ‘There are artists held in the collection who fought against the perception of their work in terms of gender, and I think that a lot of women practicing art today would feel similarly. Women might act as feminists too, without exploring feminism directly as a subject.’

In fact Weston believes that the practice of curating requires  finding a way to work pragmatically with contradiction. ‘I’ve approached this collection with the intent of highlighting the heterogeneity of women’s experience, and where possible to avoid essentialising certain themes as ‘feminine’, but I’ve also been concerned with making meaningful collections across difference,’ says Weston.

Kelly Doley: Things Learnt About Feminism is open until 10 December 2016 at the Lawrence Wilson Art Gallery. For more information about this and other exhibitions go to  Cruthers Collection of Women’s Art.

Raphael Morris is a Melbourne writer.