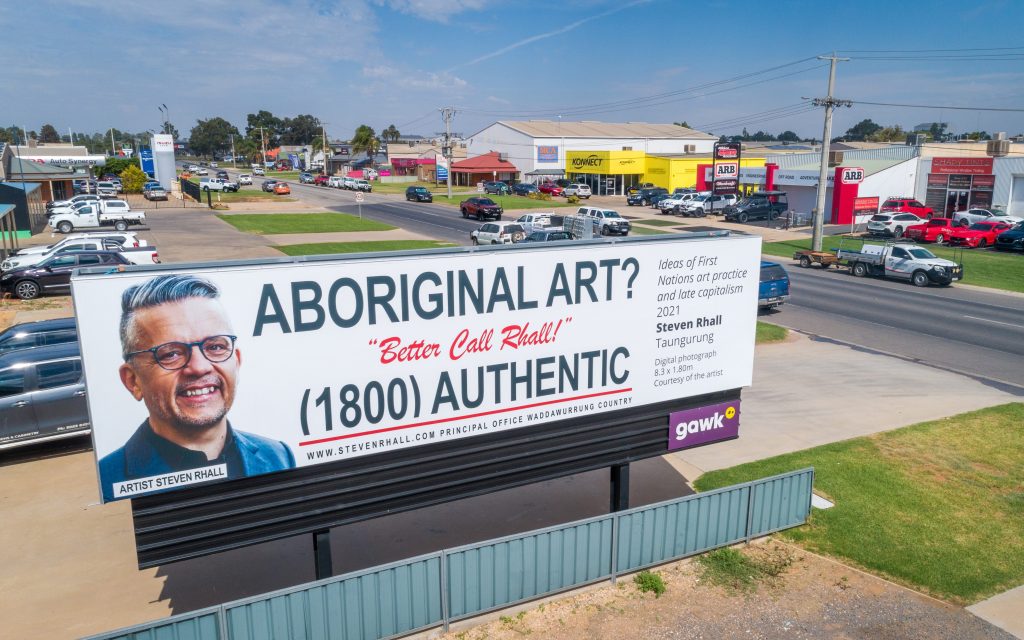 Roadside billboards may not be something you immediately think of when it comes to critically engaged art, but three works recently installed through the NETS Victoria initiative challenge such preconceptions by placing art in a setting where advertising normally dominates.

Hurling across the billboard, Hepi’s powerful silhouettes challenge the ‘commercial idealisation of the black body,’ mimicking a typical sports or dance advertisement and questioning the associated archetypes.

Intertwined with the context of the roadside location and its constant flow of cars, Hepi said: ‘Indigenous people of regard that I was exposed to were Cathy Freeman, Gavin Wanganeen and Bangarra Dance Theatre, as well as non-Indigenous people in mass media that needed to be helped in some way or were being moved along – their body in danger/endangered.’

‘Between these poles of excellence and damnation, my observation was that we were always “in motion” or migration, and unless the Blak body was seen to be good at some type of physical labour, to excel in it, it had to be moved along/away.’

The seemingly chaotic movements in Aint no body challenge the discipline and control usually demanded of the black body while posing the question to viewers: is she jumping or falling?

Ideas of First Nations Art practice and late capitalism pins a photo of the artist in a style that is reminiscent of sleazy sales tropes, declaring that Aboriginal art is just a phone call away at ‘(1800) Authentic’.

A proud Taungurung man, Steven Rhall said: ‘The aesthetic of my artwork takes on what I see as the sometimes bold and declarative highway billboard aesthetic, quickly assessing itself before the audience has driven by. This brings forth the question “Is this billboard Aboriginal Art, and further, what is or could be Aboriginal Art at this point in history?”’

Rhall continued: ‘I feel my concept boldly declares my expression as both an artist and Taungurung person. I hope it inspires its audience [to consider] the creative possibilities of artistic and cultural expression within First Nations art practice and potentially themselves.’

Curator of the NETS Victoria program, Jenna Rain Warwick added: ‘[Rhall’s] use of humour and irony to explore complex themes is poignant; as the late Bell Hooks writes, “we cannot have a meaningful revolution without humour.”’

Elsewhere in Hastings, Lisa Waup’s Journeyed is part of the artist’s series Our Way, exploring ‘the power and peril of the directional sign and its ability to control, repress and disorientate First Peoples on their own land,’ the artist said.

As a mixed-culture First Nations woman, Waup’s practice spans various media and underlines the importance of tracing lost history – an intimate journey of discovery through family, Country, and collective stories.

Each of these billboard works are supported by regional organisations including the Horsham Regional Art Gallery, Mildura Arts Centre and Mornington Peninsula Regional Gallery.

Together, these three works provide provocations around not only First Nations art, but also the visibility and context of roadside billboards as a way to communicate, provoke and engage with the public.

Amrita Hepi, Aint no body, is on display at 66 McPherson St, Horsham until 31 July, supported by Horsham Regional Art Gallery.

Find out more at NETS Victoria. This project has been supported by the Victorian Government through Creative Victoria.