Adelaide: on the cusp of a cultural renaissance 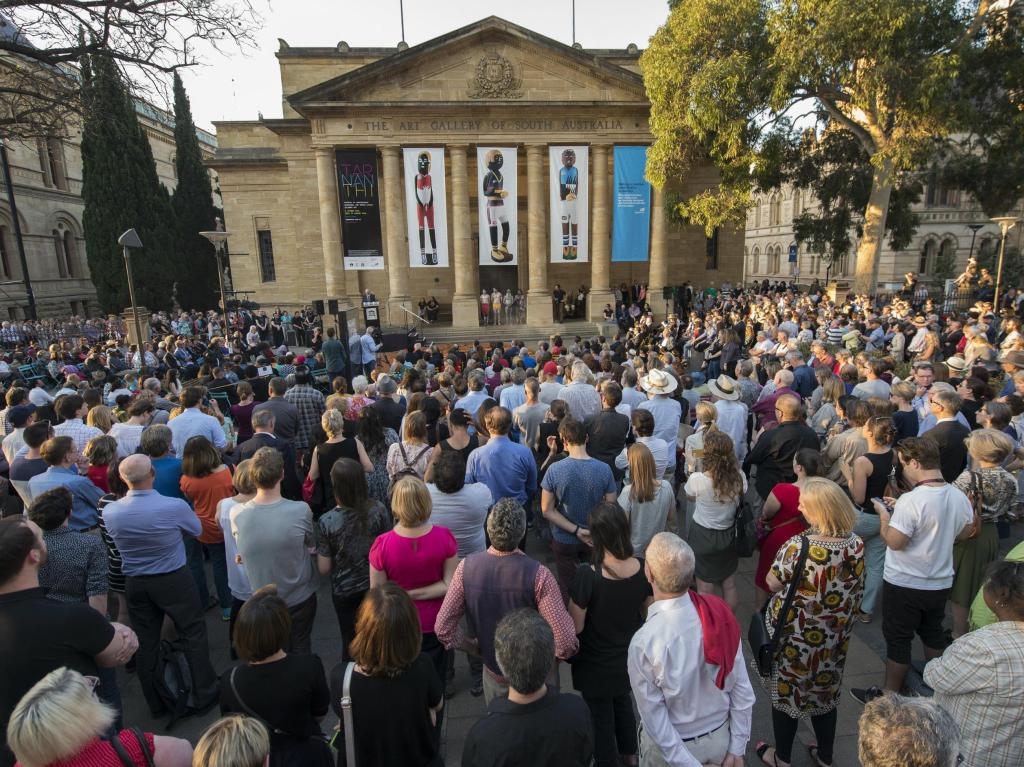 TARNANTHI launch at the Art Gallery of South Australia; photo by Ben Searcy.

Adelaide’s reputation as a cultural capital stretches well beyond Australian shores, boosted by the commitment Arts South Australia (Arts SA) continues to make in the sector.

For the second year in a row, a South Australian delegation backed by Arts SA recently made their way to the Edinburgh Festival and Festival Fringe; an initiative known as Made in Adelaide.

‘We had 97 delegates as part of the Made in Adelaide program this year and enormous artist output from our creatives over there,’ said Arts SA Executive Director, Peter Louca.

‘The marketplace for us really is outward facing – it’s not just about the domestic market but also about what opportunities we can get through touring, co-productions and other options to really grow the opportunities for our artists and for our producers.’

Learn more about Made in Adelaide

While ensuring South Australian artists are well represented on the international stage, Arts SA is also very much focused on strengthening the local creative economy, to great effect.

‘It’s almost a renaissance, an emphasis on arts and culture in the state,’ said Louca.

That renaissance is represented by a whole of government approach to the live music sector through the Music Development Office, which Louca said was going from strength to strength. ‘The live music scene in Adelaide is reawakening and growing again.’

It can also be seen in Arts SA’s support of the new national touring market, ShowBroker.

‘Adelaide is a marketplace; it’s a place to do business as well as a place of excellence,’ Louca said.

‘ShowBroker was a market for tour-ready work for national productions. We had just over 200 delegates in the first year and it was an outstanding success in the lead-up to the Adelaide festival period. We were really heartened by the response to that. We think that it adds to the important networks of market opportunities around the country including APAM and APACA.’

The headquarters of Made in Adelaide at Summerhall in Edinburgh; image supplied.

Arts SA’s investment, on behalf of the Minister for the Arts, to the state’s cultural sector also includes a number of major projects focused on advancing and upgrading cultural infrastructure, including the Adelaide Festival Centre.

‘It’s the first major capital redevelopment of that site since it was opened 40 years ago. The Festival Centre is being reimagined,’ said Louca.

As well as reorienting the Festival Centre towards the river and creating a promenade facing the River Torrens – including a Walk of Fame – the renovations include major works behind the scenes.

‘This won’t be apparent to audiences but there’s a significant reworking of all the technical equipment within the Centre itself, which will increase its attractiveness for productions and make it one of our preeminent national centres,’ Louca said.

Her Majesty’s Theatre is also being upgraded – an investment in excess of $60 million – while a set construction workshop will be opening shortly as part of the SA Film Corporation.

‘And of course the government is also investigating and have commissioned the design of a new gallery, Adelaide Contemporary … The preferred site will see the renewal of the old Royal Adelaide Hospital site adjacent to the Botanic Gardens,’ said Louca.

Significantly, the government’s investment and confidence in the state’s cultural sector has also caught the eye of the private sector. As a result, resources giant BHP Billiton is investing heavily in the Tarnanthi Festival of Contemporary Aboriginal and Torres Strait Islander Art.

‘As far as we can gauge that is the single biggest corporate investment nationally, $17.5 million for a program over five years from BHP,’ Louca said.

The interest in Tarnanthi reflects the importance of supporting artists across the state, not just in Adelaide.

‘Wherever possible we take the approach that our arts and cultural activities are not just about the city; it’s about embracing the regions and encouraging more activity. And a lot of our artists are actually based in the regions – obviously the most significant of which is the APY Lands and the significant contribution of Aboriginal art which is created in those places,’ said Louca.

‘We’re very mindful of the necessity to caretake all of that activity across the very large landmass which is South Australia.’

Visit arts.sa.gov.au to learn more about the South Australian government’s investment in the cultural sector.